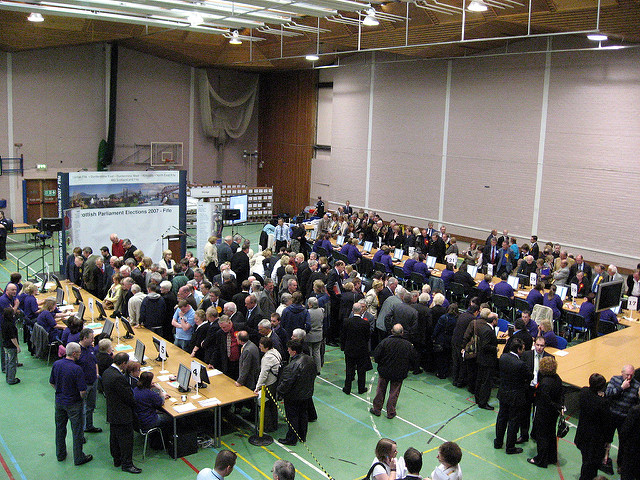 WITH THE LATEST GENERAL ELECTION POLLS showing the SNP leading by a substantial margin in Scotland and the Tories in a distant second, political commentary has focused on the seats where a struggle is between the two parties representing the constitutional and economic tensions in the country.

The Scottish Tories have focused their local, Holyrood and Westminster campaigns on presenting themselves as a competent opposition and the only viable option to defend the union as Scottish Labour’s numbers decline even further.

Scotland’s governing party, the SNP, has pushed its narrative of being the only effective opposition to the UK Tories in the House of Commons and the best equipped to protect Scotland’s interests in the event of the approaching Brexit.

We look at the top five constituency struggles that will determine the direction of the UK General Election of 2017 in Scotland.

The Scottish Tories have made this seat one of their top priorities and their candidate, John Lamont MSP, sparked much derision from opponents by announcing this week that he’d stand down from the Scottish Parliament after the local elections to fight for the seat full-time. In 2015, the SNP incumbent, MP Calum Kerr, won by only 328 votes and the Tories believe that the Borders will be an area where they can take seats.

The constituency voted 43 per cent Leave in the EU referendum and the Borders as a whole was a strong No area in the 2014 independence referendum – with 67 per cent voting to remain in the union. Farming communities and small business owners have been targeted by both Tories and the SNP in the hope of snagging a key win for both parties.

Lamont came under criticism for his stance in support of the infamous rape clause, which the Scottish Tories have said is necessary to get the deficit down. The policy which requires women with three or more children to prove if they’ve been rape has drawn the ire of charities, the Scottish Government and all progressive Holyrood parties but Lamont like other Tories has stay firm.

Lamont who is popular with farmers in the south has also backed the UK Government’s hard Brexit approach which will see Scottish farmers lose out on subsidies in the agricultural sector. Both Lamont and Ruth Davidson, the Scottish Tory leader, have both agreed with the policy of not granting assurances that the areas of fishing and agriculture will be devolved to Holyrood.

Kerr, the SNP’s spokesperson on environmental and rural affairs, has tried to secure the vote amongst the heavy farming areas in the constituency by advocating greater support for farmers in the event of Brexit. This week he hit out at the UK Government’s department of environment, farming and agriculture (Defra) over its delay of payments to farmers. £190m has failed to reach farmers so far this year.

SNP incumbent Dr Eilidh Whiteford raised her majority from over 4,000 to over 14,300 in 2015. This would seem an insurmountable target for the Scottish Tories, yet the party has confirmed that it is on its main target list. The constituency has a strong Tory past being formerly held by the ‘Buchan Bulldog’ – Sir Albert McQuarrie in 1983 who then went on to lose the seat to former SNP leader and first minister Alex Salmond in 1987.

This seat went heavily to the Leave camp during the EU referendum, by 61 per cent, but it did vote for independence in 2014. During the last Holyrood elections, the area saw a jump in the Tory share of the vote by 15 points, due to a shift in votes from Scottish Labour and Liberal Democrat voters.

Whiteford is known for her championing of causes such as the Istanbul convention which she has advocated the UK Government for ratification. David Duguid, her Tory opponent, is a former oil and gas consultant who has said he will run a “strong anti-independence campaign” for a “strong conservative voice.”

A constituency in the North East, Angus is thought by Tory insiders to be vulnerable to a Brexit focused campaign as fishing groups and communities are hostile to the EU and have asked politicians running in fishing areas to sign a Brexit pledge.

The SNP’s Mike Weir enjoys a majority of above 11,000, but the area is heavily against independence and the Scottish Tories are planning a single issue campaign of “defending the union.” Angus was also pro-Remain with 52 per cent voting to stay in the EU and 48 per cent to Leave, so the Tories will need to attract pro-Leave and anti-independence SNP voters.

The Tories have not yet settled on a candidate for this challenge.

This is a big one for both parties. The Scottish Tories will throw everything at saving Scotland’s one remaining Tory seat in the South West, and David Mundell is holding on by just under 800 votes from 2015.

Maggie Chapman, co-convenor of the Scottish Greens has confirmed that her party would look favourably on the option of not campaigning in the seat, freeing the SNP’s hand to take it. This is key as the Greens had a 2015 vote of 839.

Yet a campaign run along simple constitutional lines could possibly motivate the considerable Scottish Labour and Liberal Democrat presence in Dumfries to defect and vote tactically for Mundell, denying the SNP. The seat voted 45 per cent to Leave the EU being one of the higher votes in that direction in Scotland.

There are 7,650 Labour votes, 1,500 votes for UKIP and 1,400 votes for the Liberal Democrats. The region is one of the most unionist and conservative in Scotland, with the Tories gaining a majority of its Holyrood seats in 2016.

This will be a battle between Ian Duncan, the former MEP for the Scottish Tories who has deep roots in the constituency – as well as a profile as the party’s most prominent European voice. However, Duncan has been plagued by the same questions over his shifting position on Europe including no longer supporting the guarantee for EU nationals or membership of the single market in Brexit negotiations.

Presently held by the SNP’s Pete Wishart, the party made advances in the area during the Holyrood elections in its equivalent of Perthshire North, cutting Scottish education secretary John Swinney’s lead by 10,000 to just under 4,000.

Wishart has gone after the UK Tory party on the fraud investigation into campaign spending by the party in 2015, as well as the closure of job centres and cuts in renewables subsidies. Financial services, renewables and food and drink will be battlegrounds on which both candidates will fight. Financial services account for more than 8,000 jobs in the area, solar power development happens at Perth and the strong whisky business presence means Brexit will feature prominently on the agenda.