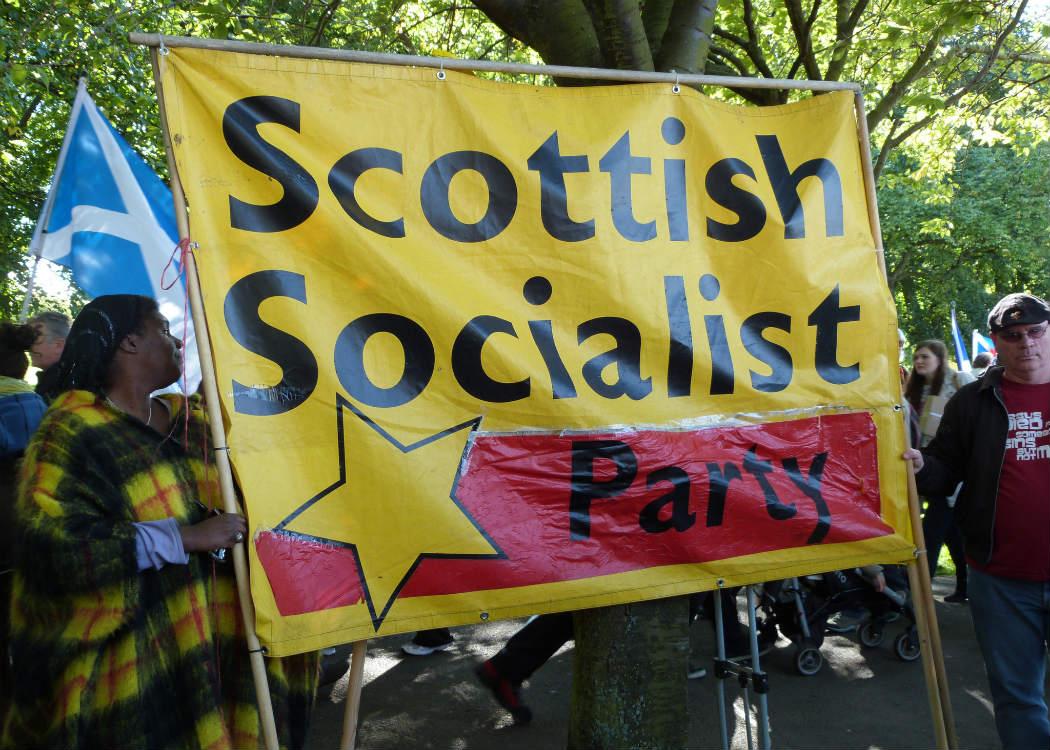 THE Scottish Socialist Party (SSP) is standing four candidates in the General Election: two in Glasgow, one in Edinburgh and one in Paisley. Modest, by the party’s own admission, but the party did have bigger sights for the General Election as part of the independence movement.

“In the wake of the referendum, the SSP argued strongly for maintaining the unity of the Yes campaign, with Yes alliance candidates,” Ken Ferguson, editor of the SSP’s newspaper the Scottish Socialist Voice, tells CommonSpace.

“That is to say, the three Yes parties – SNP, Greens and the SSP – worked out where they had the best prospect, and stand under a Yes alliance banner. We felt that it was important to maintain the energy and vibrancy of the Yes campaign.”

The idea of a Yes alliance was put forward in the immediate aftermath of the referendum, as tens of thousands of newly mobilised campaigners sought a new body to combine the forces of the Yes movement in the General Election.

The idea was predicated on the SNP’s willingness to forego a considerable degree of power for a risky venture with much smaller parties.

But in the end, the furthest the SNP was willing to go in that direction was to open up its own structures to allow non-members and new members to stand.

“We failed to achieve that [Yes alliance]. The massive growth, particularly of the SNP, made that difficult for them to agree to, understandably to some extent,” Ferguson admits.

The SNP’s growth to over 100,000 members – the first mass party in the UK in 30 or 40 years – has been one of the defining features of the post-referendum landscape, and the Scottish Greens and the SSP have faced pressure to get behind the SNP. But the SSP has resisted that argument.

“If we couldn’t get a Yes alliance, we felt that it was important for the socialist case to be part of the General Election,” Ferguson says.

“We recognise that we’re a very small party, and that first past the post is not a very happy place for us. But we are standing as a principled socialist party, for public ownership, against austerity and our key election demand – the PS10 minimum wage, not to be introduced in two years, or five years, but now.”

Ferguson says the party is not making recommendations for how people should vote in constituencies the party is not standing in, leaving it to individual members to decide. However, Ferguson does say it would be preferable to see the SNP succeed than “Jim Murphy’s Labour party”.

“They’ve demonstrated over 20-plus years now that they are market-bound, war-mongering and will only toe the London line,” he says.

“The re-invention of Jim Murphy must be the most remarkable thing since Easter 2000 years ago – here we have a man who voted for tuition fees, a hard-line supporter of the Zionist state of Israel, supports nuclear weapons – and suddenly we’re being told he’s a left-winger. I don’t know about any of your readers, but I stopped believing in the tooth fairy a long time ago, and therefore I don’t believe Jim Murphy.

“So to answer your question, it would be better for the SNP to win seats than Labour, but the SNP is not a party that is going to provide socialist answers,” Ferguson says.

“It would be better for the SNP to win seats than Labour, but the SNP is not a party that is going to provide socialist answers.” Ken Ferguson

Ferguson points to the housing crisis as an example where socialists ideas are needed and can be seen as “credible, significant, important and, crucially, possible”.

“What do I mean by that? House price rises are bad news, but this is treated as good news by the media. Housing isn’t a bargaining chip, it’s a basic part of life, and should be treated as such.

“So we would be in favour of a large-scale housing programme; modern insulated, well designed houses, at affordable rates. There’s about 200,000 people on the housing waiting list at the moment. A socialist solution, that is affordable and real, could solve that problem. That’s the sort of stuff we’ve got to put forward.”

Ferguson believes there is a wider narrative about money that is too easily accepted in the mainstream of Scottish politics.

“We need to challenge this ‘where is the money’ nonsense,” Ferguson says. “For most of the post-war period, public utilities like electricity and gas were publicly owned, that meant you built power stations when you needed them, and you employed skilled engineers to do it, at rates everyone could afford.

“What have we got now? A clapped out energy system, ancient plants, and continual concern that the lights might go out, because no one done the planning and because the owners are more interested in making money for themselves. The money’s there, the problem is we don’t control it.”

Additionally, nearly half of the population (48 per cent) agreed the government should redistribute income from the better off to the less well off, compared to only one quarter who disagreed. (Click here to read more).

In Greece, the first government of the radical left – Syriza – was elected as the majority party in an anti-austerity coalition in January this year, and in Spain another left-wing party, Podemos, is leading polls in Spain ahead of elections in June.

In that context, it could be considered surprising that socialist politics does not look likely to make a breakthrough in the upcoming General Election.

However, the left in Scotland faces historical challenges. The SSP suffered a damaging split in 2006, when Tommy Sheridan left the party and started a legal dispute against the News of the World which saw socialists speaking against each other on both sides of the court room.

The party has slowly begun to re-build in the period since, and Ferguson says the independence movement – and involvement in things like the Radical Independence Campaign (RIC) – has helped regain the confidence of socialists.

“We’re now over 30 branches, massively increased our membership, and there’s a vibrancy in the party again – and we’re the only party producing a fortnightly newspaper in Scotland.

“We are in the community and we’re an important part of the left. We accept we’re not the only part of the left, and we want to co-operate with others on the left to re-build. The key task is to ensure left-wing ideas and socialist ideas get the purchase in Scottish society that they should have.”

“We are in the community and we’re an important part of the left. We accept we’re not the only part of the left, and we want to co-operate with others on the left to re-build.” Ken Ferguson.

Ferguson also supports the Scottish Left Project, an initiative set-up by many of the activists involved in RIC to look to the 2016 Scottish elections as a chance for a pro-independence left-wing coalition that can pressure the SNP from the left. The SSP has passed policy to engage with the project.

“So the 2016 elections will be important. And I think what we now see in Scotland is the possibility of one dominant party replaced entirely by another – we’ll see the Labour party entirely swept aside by an enormous SNP. That’s got its upsides and its downsides – it’s vital that the socialist and green perspective finds expression in the parliament, because the independence movement needs that diversity.”

Over the longer-term, Ferguson thinks a party of the left in Scotland has to look to filling the space vacated by a Labour party in free-fall.

“If the Labour party takes the kind of beating that the polls are predicting, it will probably be in a state of collapse. It will lose massive sums of money, it will demoralise their activists and there will be a crisis.

“I don’t think it is likely you’ll get a new party emerge that will directly replace the Labour party as a party of the trade unions, but there’s certainly room for a formation to the left of the Labour party that could have a base in working class communities that traditionally would have backed Labour,” Ferguson says.

From John Mclean to Jimmy Reid, Red Clydeside to the poll tax rebellion, the socialist tradition in Scotland has a long and vibrant history. Will that tradition find a powerful role within the new nationalist-dominated Scotland? Only time will tell.

To find out more about the SSP’s General Election campaign, click here to visit the party’s website.