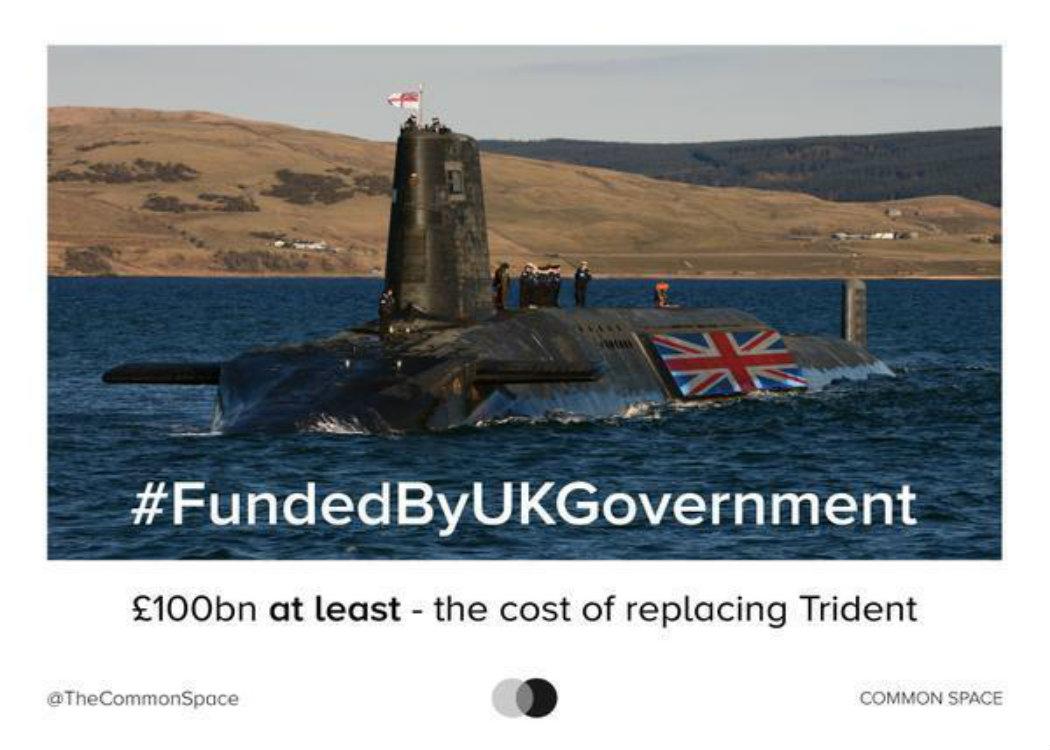 INVESTMENT claims from Chancellor George Osborne have been attacked as a fig leaf for nuclear rearmament plans.

In a visit to Faslane naval base today [Monday 31 August], announced at short notice, Osborne said that PS500m of spending would protect jobs in the military sector and meet the UK’s Nato commitement to spending two per cent of Gross Domestic Product on the military.

However, according to politicians and peace campaigners in Scotland, the money forms part of Westminster plans to impose a new generation of weapons of mass destruction on the Clyde.

Protestors from the Faslane peace camp met Osborne as he arrived at the base, with one campaigner attempting to block the road.

John Ainslie, coordinator of Scottish Campaign for Nuclear Disarmament, said: “We should beware of George Osborne bearing gifts. If you look underneath the wrapping, you will see that his real present for Scotland is more nuclear submarines. He is cutting benefits for the most vulnerable in our society and making the poor pay for more weapons of mass destruction.”

In May whistleblower and Royal Navy sailor William McNeilly exposed serious safety breaches on board a Trident nuclear submarine.

McNeilly claimed that the nuclear weapons system was a “disaster waiting to happen”.

In 2016 the UK Parliament will vote on the main-gate decision to construct another generation of nuclear submarines, the biggest spending decision over whether to renew the Trident nuclear missile system.

Fifty-eight out of 59 MPs elected in Scotland this May oppose the full renewal of the system. The Scottish Government supports disarming nuclear weapons. Renewing the missile system would have a total cost above PS100bn according to former armed forces minister Nick Harvey.

The debate over Trident is also controversial as it comes at a time of deep cuts to military personnel in Scotland and across the UK.

This month CommonSpace reported that Scotland was subject to the biggest cuts of anywhere in the UK over the past year. Military personnel were cut by 21 per cent over the past five year to 9,400.

Ministry of Defence staff numbers were cut by 20 per cent over the past five year to 3,770 staff.

Commenting on Osborne’s visit, SNP defence spokesperson Brendan O’Hara told The National : “At a time when Scotland’s conventional defence footprint has never been smaller, with major capability gaps, base closures and personnel numbers at an all-time low, it seems the Treasury apparently has a limitless pot to keep an unwanted and obscene arsenal of nuclear weapons afloat. Investment in Faslane is welcome – but it must be as a conventional base – and not more money spent on weapons of mass destruction.”

Previously the Ministry of Defence conceded that only 520 civilian jobs are dependent on the Trident nuclear system. Malcolm Chalmers of military research group Rusi found that the UK only met the two per cent Nato spending target by including PS820m of war pensions under military spending.

The Scottish Trades Union Congress have argued that more jobs would be created through a reinvestment in other areas of manufacturing.

Labour leader in Scotland Kezia Dugdale MSP has said she is open to holding a debate on Labour’s position on Trident at the party’s October conference.