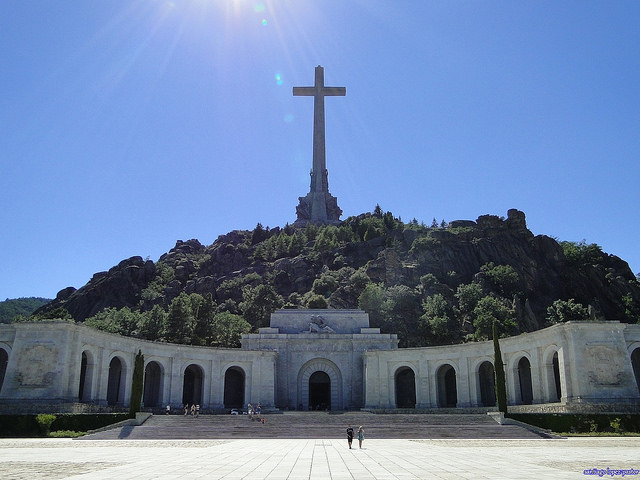 Spain’s new government has pledged to exhume General Franco’s remains from their infamous tomb, describing it as a “divisive symbol”

PLANS by Spain’s new government to exhume the body of fascist dictator General Francisco Franco from its state-funded mausoleum have been protested by over 1,000 Francoist sympathisers, who rallied outside of Franco’s tomb over the weekend.

Shortly after assuming office in June, Spain’s new socialist prime minister Pedro Sánchez pledged to remove Franco’s remains from the controversial Valle de los Caídos, or Valley of the Fallen, in the north of Madrid, describing the monument as a “divisive symbol”. The new government has stated it wishes to turn the site into a “memorial to the victims of fascism”.

Reports describe protestors singing ‘Cara al Sol’, the anthem of the fascist Phalange party, whose founder Jose Antonio Primo de Rivera is also buried within the mausoleum. Other protestors carried the flag of Spain under Franco, gave fascist salutes, and chanted “Catalonia is Spain”, and “Spaniards yes, refugees no.”

The mausoleum was constructed during Franco’s reign – which extended from the 1939 victory of Franco’s nationalists in the Spanish Civil War to the dictator’s death in 1979 – and was partially built by convicts, many of whom were Spanish Republican prisoners, in what some have characterised as slave labour.

“It’s not acceptable that people in their 90s who are desperately trying to recover their parents’ remains should be blocked by a judge or the arbitrary ruling of a local authority.” Spanish justice minister Dolores Delgado

Despite the fact that the dead from both sides of the civil war are now interred there – 27,000 Nationalists and 10,000 Republicans – the tomb remains a site of pilgrimage for the Spanish far right, and is widely seen as a celebration of Spain’s Francoist past.

In addition to the protestors, Franco’s living descendants are also opposed to any plans to move his remains. At present, no date has been set for such a move.

The protests follow the announcement of plans by the Spanish Government to establish a truth commission, investigating crimes against humanity committed by the Francoist regime.

Under a new ‘historical memory’ law, the criminal records of those convicted for opposing the Spanish state under Franco will be erased, and organisations which celebrate the memory of the dictator – such as the Fundación Francisco Franco, which every day leaves fresh flowers on Franco’s grave – will become illegal.

Additionally, the Spanish Government will embark upon a census of the victims of the civil war and the dictatorship that followed, as well as opening an estimated 1,200 mass graves containing the remains of Franco’s victims, only a handful of which have been officially dug up before.

Justice minister Dolores Delgado told the Spanish parliament: “It’s not acceptable that people in their 90s who are desperately trying to recover their parents’ remains should be blocked by a judge or the arbitrary ruling of a local authority.

“Nor is it acceptable that Spain is, after Cambodia, the country with the highest number of disappeared in the world.”

It has been estimated that 140,000 people disappeared during the Spanish Civil War, not including those who died in combat during the conflict. Until now, Spain was the only democratic nation that has failed to investigate state terrorism after a transition from dictatorship has been made, in spite of repeated demands by the United Nations.

The legacy of Francoism in Spain has been an increasingly prevalent subject of controversy over the past year, and has been frequently invoked since the beginning of the crisis in Catalonia following the 1 October independence referendum.

In October 2017, during an anti-independence rally in Barcelona two days after the Catalan parliament issued a unilateral declaration of independence, Spanish fascists clashed with Catalan authorities, while earlier that month, far right protestors in Madrid rallied under the slogan “for the unity of Spain”, making fascist salutes and marching in a procession led by the Falange Española‏ de las Jons, the modern-day successor of the Francoist party.

In his ongoing defence of the exiled former Catalan minister Clara Ponsati – who Spain is seeking to extradite from Scotland for her role in the October independence referendum – the lawyer Aamer Anwar has repeatedly drawn comparisons between the conduct of the Spanish authorities and the Franco era, saying in May of this year: “It almost seems that the ghost of Franco is dictating to the Spanish authorities what to do.”

Speaking in March at the International Film Festival and Forum on Human Rights in Geneva, the former Catalan president Carles Puigdemont argued that veneration of Franco continues in Spain, highlighting the fact that the Valle de los Caídos is publicly funded, and that the Spanish Government’s website still officially refers to Franco as a “head of state. While Franco is buried at the Valle de los Caídos, Puigdemont observed, the Republicans who fought against him “do not have any monument.”

“We can’t deny the progress that has made,” said Puigdemont of Spain’s transition from Francoism. “But to say that it is a brilliant democracy without problems is not true.”