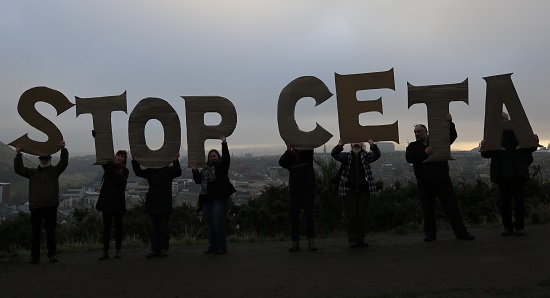 1.) What is the Comprehensive Economic and Trade Agreement (Ceta)?

It is a treaty between the EU and Canada which focuses on non-trade barriers and opening markets. Some tariffs will also be reduced, notably on whisky, but generally they are already at historic lows.

What are non trade barriers? Employee rights, food standards, protections for consumers and environmental safeguards are all non trade barriers. They count as burdens on companies and therefore barriers to unfettered free trade.

Opening up markets? Health, education, postal services, rail and waste water are all markets and are included in Ceta.

The European Commission itself carried out an impact assessment at the start of negotiations, which recommended that health and social services be completely excluded from enforcement mechanisms. This advice has been rejected by the negotiators.

Responding to profound concerns, negotiators did sign a supplementary document late last year. It said that Ceta would not restrict the ability of governments to legislate in the public interest. Unfortunately in international legal terms, this postscript has less weight than the contents of Ceta itself, which do reduce governmental freedoms.

Yes. Germany carved out its health and social services completely out of Ceta, whilst the UK did not protect the core functions of the NHS.

The key words are “market liberalisation” and “ratchet”. Market liberalisation describes the process of opening health and education markets to the private, for profit sector. The “ratchet” works as ratchets do, to allow movement in one direction, in this case open or more open.

Public-private partnerships are all openings in public services which the signing of Ceta will stick a ratchet in.

The Scottish and Westminster governments can still bring public services back in house, but they will risk being financially penalised in an international court, the findings of which stand above all domestic and European courts. Even waiting until the end of the contact before bringing something in house, for example with rail, could be challenged for reducing private sector opportunities.

‘Negative list’ is another buzz word. It means that all services are included unless specifically excluded. The net therefore catches services that have yet to be identified.

Standards, safeguards and employment rights such as the minimum wage impact on profits. This is particularly so when standards are increased, or where they differ significantly between Canada and the EU.

Yes and no. Yes governments can still take decisions, but if those decisions affect the profits of Canadian and many US corporations, they can be challenged in the separate claims system described above, and financially penalised.

These legal battles often last seven or more years, and are expensive. Even wealthy nations such as Germany can choose to water down regulations, rather than bear the costs of the contest.

Yes and no.  Yes for plugs on electric cars; no for growth hormones in beef.

The EU also assesses risk in a different way to Canada, as GMOs and growth hormones in beef demonstrate. There is as yet no scientific consensus on the safety of these practices, so they are allowed in Canada, but not the EU.

4.) So what is this international super court?

The Investment Court System exists to protect the interests of foreign investors, their profits and market access, now and into the future. Labour rights, consumer safety and environmental protections cannot be enforced in this system, and no citizen or local business can bring a case. Decisions are not weighed against the national interest or public good, yet they outrank all domestic and European laws and courts.

This separate legal process has proved so controversial that it has been taken out of the the issues to be voted on in Europe on Wednesday, and given to a committee to consider.

The committee approach, however, means that it is highly likely to be incorporated down the line, without any further democratic scrutiny from the European Parliament. Some commentators suggest it is 80-90 per cent certain.

5.) Is equality under the law important?

Laws have always been unequal. As the famous saying goes, the rich and poor alike are forbidden from sleeping under bridges…

However unequal the impact and enforcement, it is a core concept of democracy that no one should be above the law. President Trump has been testing this principle, and when the courts found his muslim ban to be unconstitutional, they reaffirmed that the president and executive branch are subject to the law and constitution.

Like many countries, the UK has a constitution whose purpose is to structure and separate state powers to prevent serious abuses of power. Unusually, this constitution is not contained in an identifiable document, but instead rests on two pillars. The first is that everyone is equal before the law, and Ceta’s separate legal system demolishes it.

The second pillar is parliamentary sovereignty, which means that parliament has the power to take its own decisions. After each general election, a new parliament takes its mandate from the people and this lasts until the next election.

No parliament can therefore bind those coming after it, because if they did, democratic elections would quickly become a squabble for the crumbs left on the table.

6.) Would a Scottish fracking ban be vulnerable under Ceta?

The “necessity test” means that regulations should “not more burdensome than necessary”. What exactly this means has been contested many times, but the international tribunals established to protect the interests of multinational investors, tend to interpret necessity narrowly, and find many things to be unduly burdensome.

Fracking bans, as the people of Quebec will confirm, can also be challenged in other ways. In 2013 Lone Pine, a Canadian company, used an American subsidiary to access the international tribunal system, and then launched a multi-million dollar claim for the loss of expected profits, when Quebec introduced a moratorium to preventing fracking under the St. Lawrence river, while further studies were conducted. The claim has yet to be resolved.

Should a Scottish fracking ban be challenged, it is likely that it would be for the UK sovereign government to choose whether or not to defend it. Westminster is, after all, in favour of fracking. Liability for any financial penalties would stay with Scotland.

7.) Is Ceta compatible with a low carbon future and the commitments made in Paris?

To tackle climate change we need to move to a low carbon economy and Ceta locks us into a high carbon trajectory. The focus is on increasing transactions, and environmental protections are vague.

The Fuel Quality Directive was an EU initiative to eliminate imports of the dirtiest, most polluting fuels such as Canadian tar sands. During Ceta negotiations the Directive was watered down.

Ceta also undermines Canadian buy local initiatives, and prevents an increase in the threshold for open bidding on procurement in Europe.

However lovely the Canadians themselves, Canadian companies are extremely litigious, and have claimed billions through international corporate courts.

The TransCanada Cooperation alone laid a $15bn suit against the USA for all the profits it would not receive when Obama’s administration rejected the Keystone XL pipeline. Permission for this pipeline was refused, because of concerns that exporting tar sands oil in such volumes would harm the global climate, and that spills would cause local damage.

American companies also have a reputation for being litigious, and 81 per cent of those already working in the EU have offices Canada, and so can already make use of Ceta.

The Canadian Government can be extraordinarily ruthless in its interpretation of treaties. Just ask the indigenous First Nations, whose treaty rights are buried under tar sands, or whose lands are poisoned by fracking on an unimaginable scale.

9.) What about democratic scrutiny and accountability?

Twelve MPs discussed Ceta last week in an upstairs room in Westminster, when the Article 50 hubbub was at its loudest. Seven of them decided this was enough oversight, a majority.

To get to this point, the European Commission and Canadian negotiators worked in secret with multinational corporations to create the text.

The European Scrutiny Committee in Westminster caught wind of its provisions and said in early September last year that a full debate on the floor of the House was needed because of its complex legal and policy implications, and unprecedented levels of public interest.

Since then, the secretary of state for international trade, Liam Fox, has blamed scheduling issues in the parliamentary calendar for the failure to have the debate.

Emails from his aids however, show a prolonged reluctance to contact the parliamentary business managers, followed by confusion as to whether they needed to set “an actual date”, or whether they could just say they were “in the process of scheduling a debate”.

In absence of a parliamentary debate, Liam Fox was given exceptional permission to sign Ceta, but no more, at the Council of Minsters meeting. The permission was conditional upon an urgent debate on the floor of the House. Fox agreed that a debate was “of the upmost importance”, went to the meeting, and acted well beyond the exceptional permissions given to him.

More busy parliamentary calendars, and a dozen MPs find their way to Committee Room 10, dub it a “foxhole”, and hold a short debate the week before the vote in Europe.

The essence of the debate was that; parliamentary sovereignty and democratic oversight required Ceta to be debated properly on the floor of the House. A debate was necessary because Ceta contained serious legal, constitutional and policy issues, including public services and freedom to govern in the public interest.

Ceta could also be used as a template for future treaties, and this status made debate vital. Furthermore, without a debate on the floor, the minister acted beyond his authority in the Council of Ministers meeting.

Not so, said the Tory 7.  Oversight is over.

10.) What will Scotland’s MEPs do when Ceta comes to a vote on 15 February?

All six of Scotland’s MEPs have repeated declined invitations to debate this issue in public, but SNP MEPs Ian Hudghton and Alyn Smith have declared their intentions to vote against Ceta.

David Martin of Labour, however has been heavily involved on the International Trade Committee and talks of a mandate to negotiate trade agreements.

Campaign groups such as Global Justice Now and Cets Check, frustrated at the unresponsiveness of MEPs, have suggested that the public phone their representatives before they vote on Wednesday, if they have concerns over this treaty.