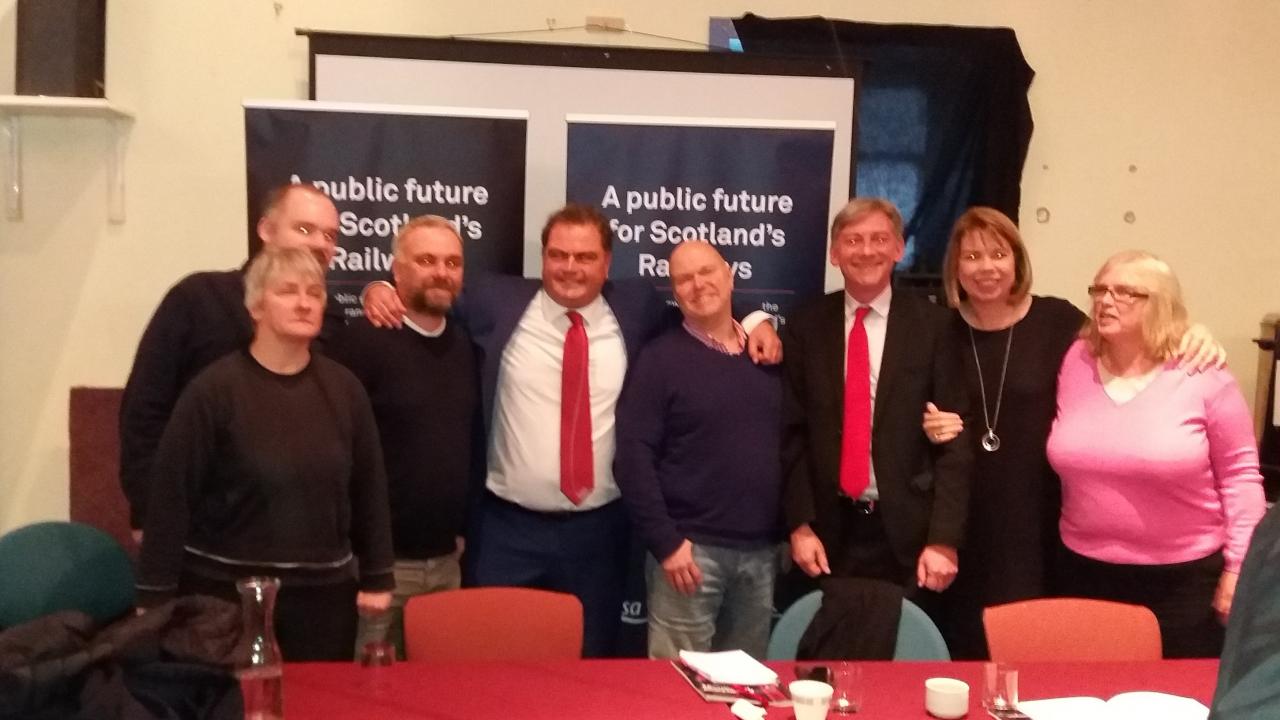 SCOTRAIL should be taken over by a public sector body which could symbolise the nation Scotland aims to become in the 21st century, according to a new report commissioned by the think tank Common Weal and published by the Transport Salaried Staffs’ Association (TSSA) trade union.

The report, ‘A public future for Scotland’s railways’, was launched on Tuesday morning at an event attended by the new Scottish Labour leader Richard Leonard and Scottish Greens MSP John Finnie, who – along with Common Weal director Robin McAlpine and TSSA General Secretary Manuel Cortes – endorsed its conclusions and proposals for a new model of public ownership.

The report offers guidance on how Scotrail could most effectively be nationalised, and suggests the creation of a publicly owned company based on similar models long employed by other European nations with higher standards and lower costs. The report argues this not only as a the fairest and most effective way to operate Scotland’s railways, but as a catalyst to transform Scotland’s entire transport system.

The report describes ScotRail as “one of the most highly subsidised franchises in the UK”, with current operator Abellio Scotrail receiving £293m in direct government funding in 2015-16. According to the report, this amounted to over over 45 per cent of its total income.

Figures quoted within the report suggest that, under public ownership, rail fares in Scotland could fall immediately by at least six per cent, with continuing year on year decreases in ticket prices as fare revenues are reinvested in rail services, rather than being used as the source by which profits are funded.

“When you have a transport system which is run by contracts and profit motive, you get a skewering of what should be a public service.” Scottish Labour leader Richard Leonard

In contrast to the highly centralised management model of the previously nationalised British Rail service, the publicly owned company the report endorses would be based around industrial democracy. In his contribution to the panel discussion, John Finnie emphasised the necessity of workers’ representation in any potential model for public ownership.

Given that Scottish administrations at Holyrood could not fund public sector bids for the ScotRail franchise until the devolution of new powers under the Smith Commission in 2016, Robin McAlpine also acknowledged that the devolution of further powers could open up new possibilities for more radical public ownership schemes in the future.

Speaking at the report’s public launch at the Serenity Café in Edinburgh, Richard Leonard said: “When you have a transport system which is run by contracts and profit motive, you get a skewering of what should be a public service.

“I think there are, set out in this report, extremely compelling economic, social and environmental reasons why public ownership is absolutely essential. I was the secretary of the Save Our Railways campaign in 1992 and 1993, when we were battling against the John Major government’s attempt to privatise the railways, and I regret that all these years later, we’re still talking about the reform of a private rail system.”

“There is common ground where we can work together and make the case for the return to public ownership of the Scotrail services.” Scottish Labour leader Richard Leonard

Noting that, with the exception of the Tories, there are areas of mutual agreement between all the political parties represented within the Scottish Parliament on the issue of public ownership, Leonard continued: “There is common ground where we can work together and make the case for the return to public ownership of the Scotrail services.

“It’s often put to those who argue for public ownership: ‘How much is it going to cost us?’ But as this report makes clear, 45 per cent of the running costs of the ScotRail franchise are straightforward taxpayer subsidy, and the rest of their income is paid for by us as passengers. It seems to me fairly straightforward to argue that, rather than handing that money over to private operators, it seems entirely sensible to keep that money within the system and operate ScotRail ourselves.”

“Somebody emailed me last night to say – because I made a speech yesterday to argue for bringing the railways back into public ownership – ‘How’s that going to help poverty and inequality?’ Well actually, it will – because it would free up public money to invest in anti-poverty strategies.”

Pointing to the report’s revelation that 30 per cent of households in Scotland do not have access to car, and that such households are predominately low-income, Leonard also argued: “So providing a better public transport system is an anti-poverty and anti-inequality measure.”

“There’s been a lot of aspirational talk about public ownership from Holyrood politicians but so far, no real action.” TSSA General Secretary Manuel Cortes

“This is an extremely welcome contribution to those of us who are campaigning for public ownership of the railways. The phrase I like best in the whole report is the one that says: ‘Privatisation is an aberration.’ It is. It’s not the orthodoxy. Let’s get with the orthodoxy in most of the rest of the rest of the world. I’m delighted to be here today to welcome this report.”

Commenting before the report’s launch, Manuel Cortes said: “There’s been a lot of aspirational talk about public ownership from Holyrood politicians but so far, no real action. This report was commissioned with the intention of filling that gap. It does a good job because it’s a practical how to guide to taking back control of Scotrail so it cannot just be an effective public rail service, but transform the future of Scotland’s entire economy.

“It’s proposing nothing less than a Scottish People’s Railway as the most viable way of running Scotland’s railways.” TSSA General Secretary Manuel Cortes

“First, we need to take back the train operating company franchise from Abellio, then we bring the rolling stock back in-house and we begin restoring a strong, collaborative relationship with publicly owned Network Rail in a company whose governance structures put passengers and rail workers at the heart of Scotland’s railways. It’s proposing nothing less than a Scottish People’s Railway as the most viable way of running Scotland’s railways.

“Since 1997 several hundreds of millions of pounds has been drained out of Scotrail in profit depriving it of significant investment funds. Gaining control of those revenues means a real long-term strategic rail plan for Scotland can be developed in conjunction with wider with economic, social, industrial and environmental strategies. The report’s scope is on public ownership of ScotRail but it’s reach, if implemented, could be truly transformative for the whole of Scottish society.

“Transport Minister, Humza Yousaf has suggested a move to public ownership by 2020 is too ambitious, but this report shows it just a matter of political will to make it happen.

“South of the border, of course, the Tories fight their ideological war to keep the trains privatised. But up here, this report shows there is nothing to stop the SNP now but themselves from taking a lead in this no-brainer, common good direction.”

“It was the SNP government which secured the right for a public sector operator to bid for the franchise, after being repeatedly denied that right by successive Labour and Tory governments.” Spokesperson for Scottish Transport Minister Humza Yousaf

At the launch, Cortes noted his disappointment that transport minister Humza Yousaf could not attend, nor was any Scottish Government representative sent in his stead. However, following the launch, Cortes has been invited to a private meeting with Yousaf to brief him personally on the report and its proposals.

A spokesperson for Yousaf was quoted in the Evening Express as saying: “It was the SNP government which secured the right for a public sector operator to bid for the franchise, after being repeatedly denied that right by successive Labour and Tory governments.

“This will enable us to ensure the delivery of rail services in Scotland that deliver maximum economic and social benefit.

“TSSA are involved in cross party discussions with the unions on a public sector bidder and we look forward to receiving a copy of their report.”