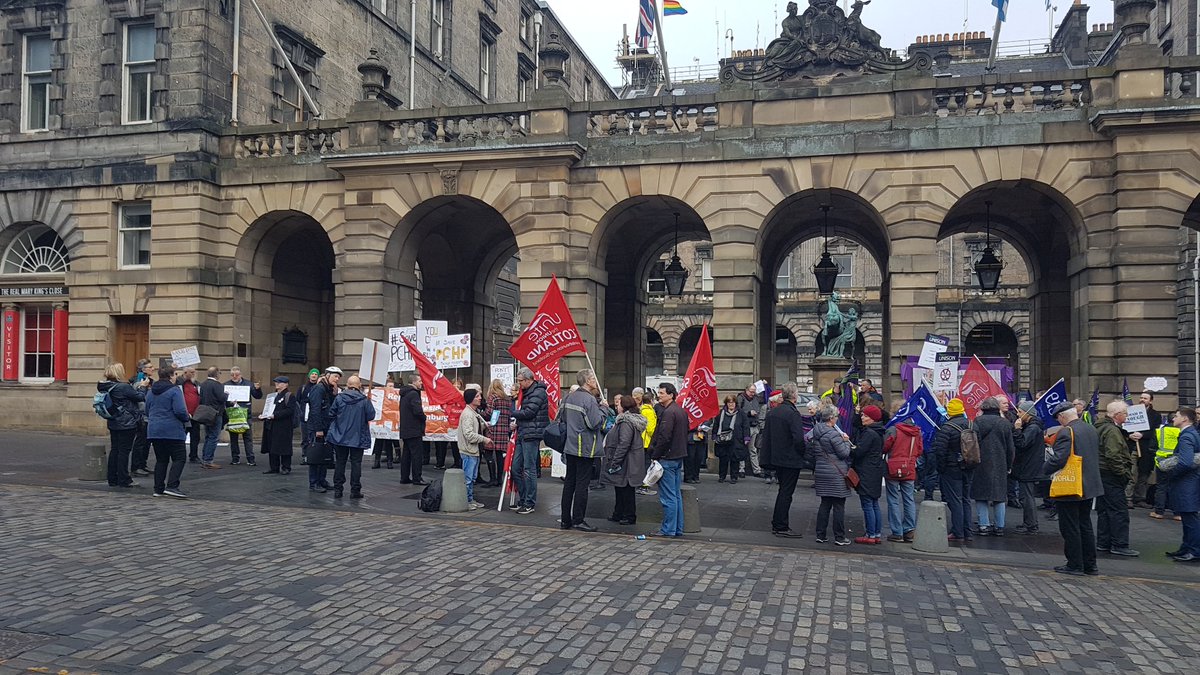 PROTESTS outside Glasgow and Edinburgh city councils today (Thursday 21 February) called on local authorities to not enact cuts worth tens of millions of pounds and demand more money from central government instead – but councillors in both cities proceeded to pass their reduced budgets for 2019/20.

Parties fell out in the Glasgow City Council (GCC) chamber, principally over how much of a shortfall in funds should be recuperated via increases in council tax and how much should be secured from council reserves. However, the lions share of the funding gap is set be closed by cut services. The SNP minority Glasgow City Council leadership’s budget proposals, passed by the Council, agreed to £22.6 million of savings, as well as a 3 per cent increase to Council tax raising £6.6 million and spending £13 million in reserves, closing a funding gap of £42.2 million.

Some of that gap came from from payments for women workers who took successful industrial action last year demanding equal pay with male workers as part of a dispute going back over a decade.

Outside the chamber Unison, which led the industrial action, called on the council to halt all cuts and demand fresh funding.

Analysis: The grim plight of austerity in Moray Council could be just the start unless big change comes to Local Government soon

Speaking to CommonSpace, Glasgow Unison secretary Brian Smith said: “They should refuse to make any more cuts, and join with us in demanding more money.

“We’ve made the same argument again and again; the councillors have the power to set a no cuts budget and demand more money.”

In December last year a list of facilities that could potentially be cut to make savings was leaked to the Evening Times. It included a range of sporting and leisure facilities operated by Glasgow Life across Glasgow, including Barlia Sports Centre, Bellahouston Bowls, Drumchapel Pool, Greenfield, Ruchill Golf, Haghill, Ibrox, John Paul, Lister Street Bowls, Lochend and Stepford, Whitehill pool and Haghill Gym.

Whitehill pool campaigners were offered a short reprieve after they successfully secured the future of their pool earlier this month. However, they joined unions outside the city chambers, fearing that without additional funding facilities could still close.

A statement by Save Whitehill pool campaign said: “Recent press has given us cause for optimism in the short term, but it’s not over yet!  Alexandra Parade Golf Course is still very much at risk. Whitehill and Glasgow Club Haghill appear to be off the table for now but there is no commitment for investment and no security for the venues in the long term.  We need to ensure these venues have a future.”

Meanwhile, trade unionists also gathered outside Edinburgh City Council before taking their protest down to the Scottish Parliament.

A budget was passed with £33 million in cuts scheduled for Scotland’s capital city. At least 200 jobs are set to go under the coming years funding proposals under the SNP-Labour administration, but trade unions worry the ultimate number of job losses could be far higher.

Unison Edinburgh lead negotiator Tom Connolly said: “The Scottish Government must stop handing down austerity to councils. While it has faced a revenue cut of 1.8 per cent over the last five years, it has hit councils for a whopping 7.1 per cent in cuts.”

“Edinburgh has lost £240m – a quarter of its previous budget – in the last five years. Nine out of 10 of all public-sector job cuts have come from local councils.

“And it is not only council jobs. A total of 35 community and voluntary organisations are set to lose out on their funding this year with more cuts likely to follow. These groups provide services our communities rely upon. There is a very serious risk that our young, elderly and vulnerable citizens could fall between society’s cracks if we do not stand together and speak up for them.

“This just cannot continue if we expect decent local services. It is time for communities across Edinburgh to say enough is enough.”

Unison Edinburgh branch spokesperson John Stevenson said: “Unison is saying enough is enough and this silent slaughter of local services has to stop. We call on councillors to defend local services, challenge the Scottish Government for more funds and not just administer cuts.”

Responding to criticism of local authority funding cuts, a Scottish Government spokesperson said: “We are delivering the most significant empowerment of local authorities since devolution and providing additional funding to support local services, with up to £187 million of increased funding and flexibility to councils, on top of the £11.1 billion local government settlement.

“In total overall spending power for local authorities next year will be £620 million higher than it is currently.”

The Scottish Parliament passed its Budget at Holyrood on Thursday, a formality after the SNP and Greens struck a budget deal last month which saw increased funding availability for local authorities agreed through the ability for Councils to increase the Council Tax, establish a Tourist levy and workplace car park levy. The Greens claimed the increased funding closed the £237 million gap in council budgets identified by Cosla, but with increased costs for education and social care, Councils have still faced holes in their budget for 2019/20.

North Edinburgh Save Our Services campaigner Willie Black said: “Our campaign is to protect vital services that are needed. I think all projects are being attacked but North Edinburgh has had a larger propotion of cuts.