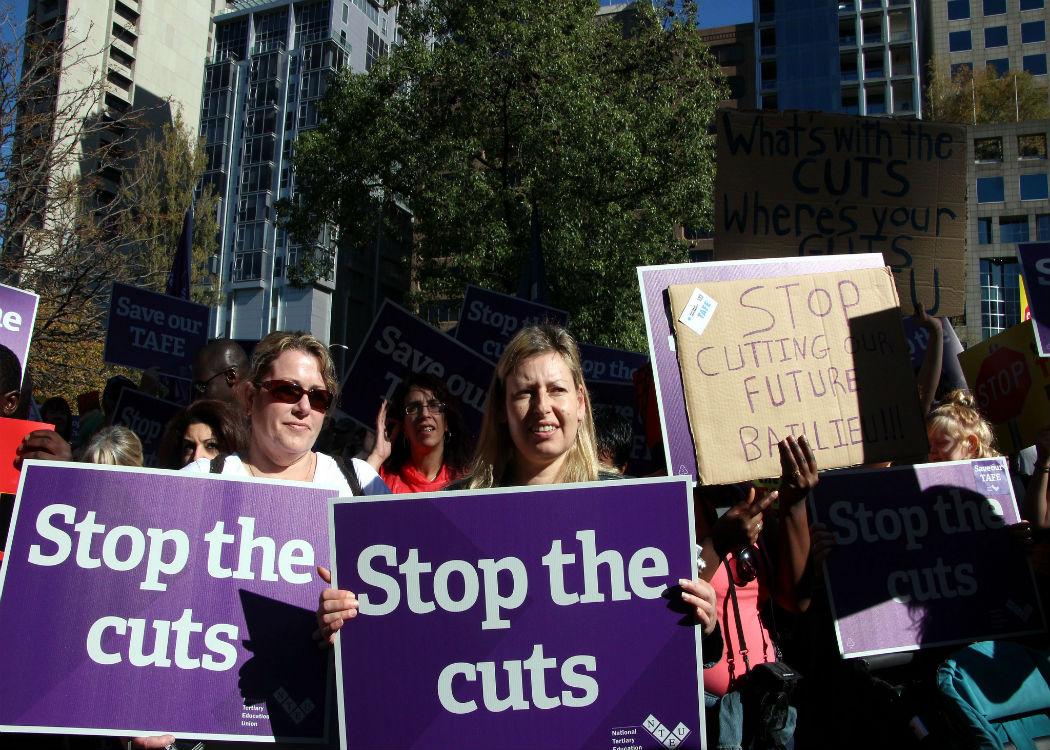 PS29m council cuts will hit a widespread range of services, including elderly housing support, day care centres and education for children in hospital

GORDON Matheson, Glasgow City Council leader, has clashed with the Glasgow Unison branch secretary Brian Smith over the impact cuts have had on the city ahead of the council’s budget meeting on Thursday, which is expected to propose PS29m more cuts.

The cuts are expected to fall on education services for children in hospital, day care centres and housing support for the elderly, among a range of other services, but trade unions are saying a ‘no cuts budget’ is a viable alternative.

The budget will be the latest stage in a programme of cut-backs at Glasgow City Council, and protests against the plans reached the City Chambers on Wednesday.

However, hitting back, Matheson told CommonSpace that the Scottish Government was to blame for local government cutbacks, saying: “It’s startling but true that if Glasgow received the same percentage share of the available local government budget in Scotland this year as we did in 2008, Glasgow would have an additional PS109m to spend on our vital public services.

“It’s only as a result of clear political leadership and sound financial planning that we’ve survived the last few years with no really substantial damage to services.”

Brian Smith, Unison branch secretary, ridiculed the idea that there had been no substantial damage to services in Scotland’s largest city since austerity began in 2010, saying over PS200m had been cut in the last five years, with the loss of 4,000 jobs.

“It’s absolutely incredible to say cuts have not damaged services, our members know the damage that has been caused,” Smith told CommonSpace.

Glasgow City Council’s budget cuts plan is likely to be passed on Thursday as Labour holds a majority in the council.

Smith has supported a “No Cuts Budget” alongside trade-union leaders in Glasgow from the EIS, Unite and the GMB, and has outlined three measures that he says would fill the PS29m funding gap:

– Use a further PS6m from the general reserve (leaving PS12m)

– Add PS20m to the existing PS1.6bn debt of the council

Smith said the trade unions would back any politician who was willing to support a no cuts budget, as it “would allow the time and space to build a mass campaign of elected members, trade unions, user groups and local communities with the objective of winning more money from national government, especially in light of the PS400m Scottish Government underspend”.

“Glasgow’s politicians have a choice,” Smith added, “make the cuts or do not.”

Glasgow City Council’s treasurer, Councillor Paul Rooney, wrote a letter in response to the trade unions, arguing that it simply was not possible to do as they ask.

“The PS29m of savings you refer to are savings from our revenue budget,” Rooney said, “and we are not permitted, except in very narrow circumstances, to use borrowing to fund revenue costs. Essentially, we are not legally allowed to implement your suggestion.”

Rooney went on to add that the cuts for 2015/16 were only the start of much more severe cuts to come.

“While a spending reduction of PS29m feels like a large number, it is sadly relatively small compared with the funding cuts we are likely to see in the following two or three years. All Scottish councils will make some difficult decisions next year, however they are in no way as difficult as the decisions they will be forced to take in the future,” Rooney said.

Smith told CommonSpace that although Rooney was correct to say that the council can’t legally borrow for revenue spending, he didn’t accept Rooney’s argument that the council’s hands were tied.

“We believe there’s a way of setting a no cuts budget legally, by moving some revenue spending into capital spending, like new windows for schools, as one example. Or the council could do it illegally, by setting a deficit budget.

“The real problem is there’s not the political will to do it. Austerity from the UK Government is clearly at the heart of the issue, but the Scottish Government and local government are just passing the cuts on, rather than fighting it.”

Gordon Matheson, leader of Glasgow City Council, refuted the idea that the council was responsible, saying: “Everyone understands that the Scottish Government has subjected the people of Glasgow to year after year of disproportionate cuts.

“It’s been estimated that the Scottish Government has faced a 10 per cent real terms reduction in its budget over the last five years. However, over the same period Scottish councils have faced a 24 per cent cut.”

Glasgow Unison has organised a protest outside the city council budget meeting at the City Chambers, George Square, at 12.30pm on Thursday, and expects widespread representation from campaigners and trade-unionists.

CommonSpace reported earlier (click here to read more) that Glasgow Care Crisis, an anti-cuts group against the closure of the day care centres and cuts to mental health services, chained themselves inside the council’s City Chambers in protest against cutbacks.