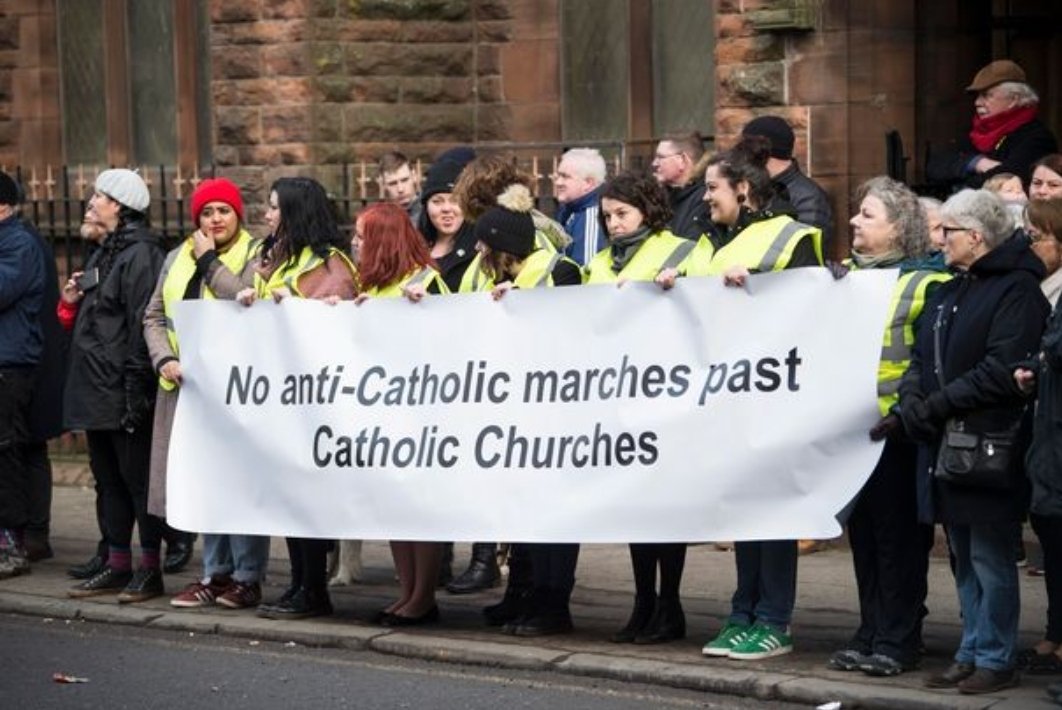 Glasgow City Council: “Members chose to re-route the procession after hearing serous concerns, raised by Police Scotland, about the potential for disorder”

The decision comes after campaigning and lobbying led by the ‘Call it Out’ campaign against anti-Catholic bigotry and anti-Irish racism, including protests, to oppose the marches going passed the St Alphonsus’ and St Mary’s churches.

Call it Out held a silent protest in February as an Orange Order parade went passed St Alphonsus’ church, the first since Canon Tom White was spat on in July last year by a participant in an Orange Walk as it passed by. The offender was later convicted of assault at Glasgow Sheriff Court.

The Committee heard from Police Scotland that they were in receipt of intelligence that there could be “significant disorder” if the route proposed by the Apprentice Boys of Derry (Bridgeton) went ahead.

BREAKING: The anti-Catholic march due to pass St Alphonsus and St Mary’s on Easter Sunday has been re-routed. The march will no longer pass any Catholic churches. Thank you to all those who raised objections! pic.twitter.com/lPbxMnvGgp

A Glasgow City Council spokesperson said following the decision: “Members chose to re-route the procession after hearing serious concerns, raised by Police Scotland, about the potential for disorder due to protests and counter-protests from people opposing or supporting the event.”

The Call it Out campaign encouraged supporters to raise objections to the planned march directly with Councillors, and following the decision Call it Out’s chair, Jeanette Findlay, told CommonSpace that they were “delighted” with the Council’s decision.

“We’re delighted with the decision, we think it’s a sensible decision that meets the needs of everyone. They can march and it doesn’t go past the churches. That’s all we’ve asked for,” she said.

Asked about Police Scotland’s evidence to the committee, Findlay said: “Any possible disorder has nothing to do with us. We don’t know about that. Our protests have always been peaceful.”

Orange Walks take place all year round in Glasgow, but are especially prolific in the ‘marching season’ from April to August. Call it Out and and other anti-racist campaigners say that the marches are anti-Catholic.

Asked whether the council’s decision for the Easter Sunday march could set a precedent for all future marches, Findlay said that there were “broader issues that do need to be addressed”.

She explained: “For as long as I’ve known the practice has been that the council make the decision and almost always give the go-ahead for the organiser’s proposed route if Police Scotland don’t say there’s likely to be disorder. We think that’s not the right way to go about it. The councils have it in their power to have a sensible policy on the routing of marches, and the Police too shouldn’t only consider the threat of disorder when they give their advice, if they take a human rights based approach to policing seriously.

“Cabinet Secretary for Justice, Humza Yousaf, has told us in a meeting that there is no need for new legislation to make these changes on routes of marches, that they could all be made within the existing law. The change we want is simple: these marches shouldn’t go passed Catholic churches.

“Because we do need a longer-term solution to the problem; these marches are all year-round. And we don’t want to have to keep going back to the council every single time [an Orange Walk is organised]. So we need to sit down and come to a view for the long-term. We’re not looking for a fight, we’re not looking to ban anybody, we’re just wanting to come to an agreement so that there’s a consistent policy.”

Picture by Call it Out