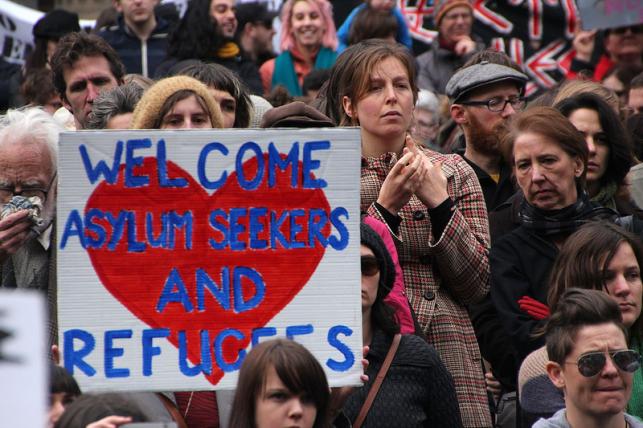 HUNDREDS OF ASYLUM SEEKERS in Glasgow are facing enforced homelessness once again as the private housing provider Serco has announced it will restart its lock-change policy, which many have said could prompt a humanitarian crisis in the city.

The company is currently contracted by the UK Government to provide accomadation for asylum seekers in Scotland, but has announced it will restart plans first announced last July to evict hundreds of asylum seekers who have had their applications rejected by the Home Office but are at various stages of appeal.

The plans prompted cross-party outrage in 2018, with politicians from the SNP and Scottish Labour even pledging to take part in direct action in the style of Mary Barbour to stop the evictions.

After the announcement yesterday, Glasgow City Council warned of a “imminent homelessness crisis”, and council leader Susan Aitken also said the council may be forced to reconsider its participation in the asylum dispersal programme: “If there is no satisfactory resolution to this matter, one which accepts the inevitable consequences of lock changes and prevents them occurring, then Glasgow will have no alternative but to consider what, if any, future it can have in an asylum dispersal programme which allows for the imposition of such inhumane practices, against the express wishes and values not only of Glasgow City Council, but also of the citizens and communities we serve.”

Speaking to CommonSpace, Labour MP for Glasgow North East Paul Sweeney criticised the announcement: “Just as we saw last summer, Serco are now intent on pursuing a callous policy that risks causing mass destitution on the streets of Glasgow.

“Just as we saw last summer, Serco are now intent on pursuing a callous policy that risks causing mass destitution on the streets of Glasgow.” Labour MP Paul Sweeney

“Fundamentally this boils down to a Home Office policy that is both inefficient and callous. So called failed asylum seekers may well be considering appeals or further submissions of evidence with their solicitor. They should be given the breathing space and consideration to do so without fear of ending up on the streets or having to disappear into the black economy.

“It would also save the taxpayer millions if the Home Office simply allowed asylum seekers, who are often well educated and skilled, the right to work and sustain themselves, instead of being stuck in tortuous administrative limbo for years. The Home Office continues to demonstrate that its asylum policy is an affront to human dignity and requires an urgent review if Glasgow is to continue to participate in the asylum dispersal programme.”

The Scottish Refugee Council said they were “outraged” at the decision, saying that the agencies who work with the refugees daily were not informed of the plans: “We are outraged at Serco’s plan to initiate lock change evictions in the coming weeks and months. For hundreds of men and women in Glasgow this will mean forced eviction from their only source of accommodation and safety in Scotland,” said Graham O’Neil, policy manager at the Scottish Refugee Council.

SNP MP Chris Stephens called for a debate on the issue in the House of Commons on Thursday afternoon, saying the actions of Serco had prompted anger and disgust  from many Glaswegians.

The outsourcing giant, who lost the contract to provide housing to asylum seekers in Glasgow earlier this year, said it would make upto £150,000 available to charities supporting the homeless in the Glasgow area.

Julia Rogers, Serco’s managing director for immigration, said: “We very much regret the distress this will cause, but hope that it will be understood that we cannot be expected to provide free housing indefinitely to hundreds of people who have been unsuccessful in their asylum claims and most of whom have no legal right to remain in the UK.”