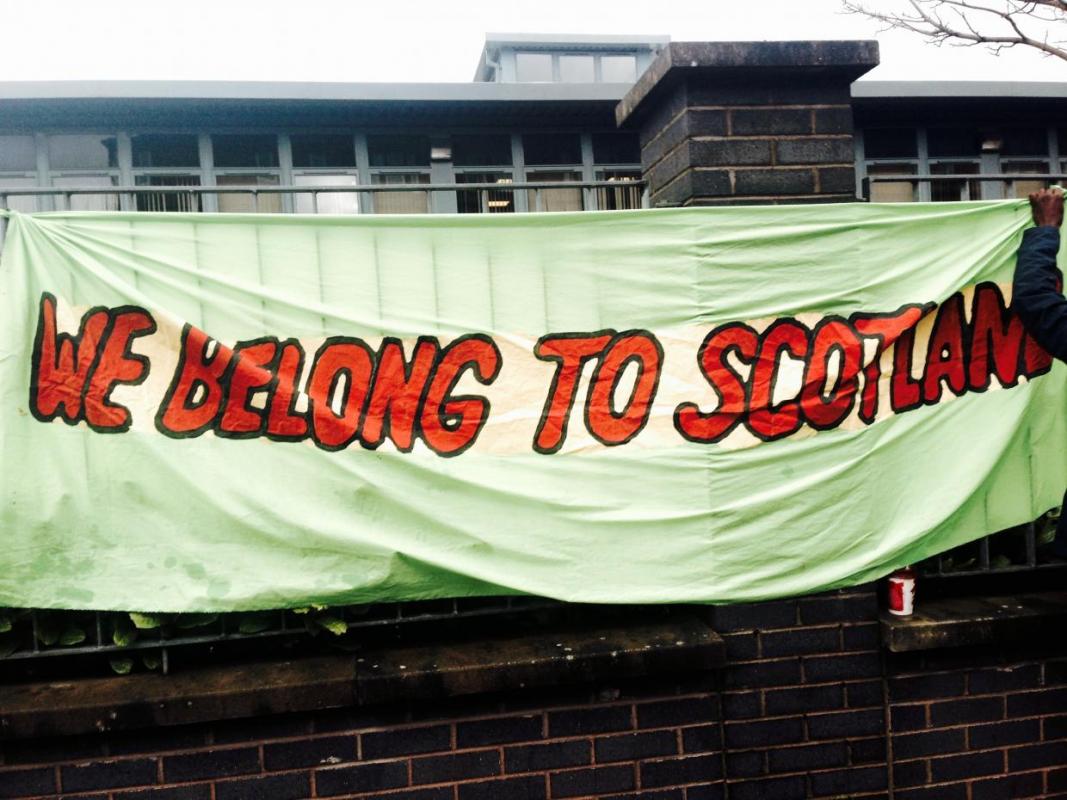 CAMPAIGNERS and refugees condemned the practice of draconian ‘dawn raids’ by UK migration officials at a protest outside the border agency’s Glasgow offices.

Called by the Glasgow Anti-Raids Network, the protest focused on the UK Border Agency’s (UKBA) Brand Street centre, where those seeking asylum must regularly report.

A spokesperson for the network said: “We’re here in solidarity with people fleeing wars that this government created.”

Colourful banners were hung from the gates denouncing dawn raids and detention, and stating “We belong to Scotland.”

Ewan, a student attending the protest, told CommonSpace: “It’s a disgrace that dawn raids are happening in Glasgow again. The police shouldn’t be facilitating the Home Office’s brutal removals.”

Five minutes walk from the Brand Street offices is the Unity Centre volunteer network, which offers support to those in the immigration and asylum system.

Jenny, a volunteer at Unity, said they were protesting the “racist practice of dawn raids which have been happening regularly across Glasgow, in workplaces and homes.”

Dawn raids, the practice of seizing families attempting to gain refuge in Scotland for deportation, has faced community resistance for over a decade, especially in Glasgow.

Less than a month ago The Herald reported that a raid in Bridgeton saw a Chinese family with two toddlers detained, the mother Mai Lin handcuffed at Glasgow airport and then deported with her children.

Cabinet Secretary for Social Justice Alex Neil wrote to the Home Secretary on 13 November seeking an explanation for the treatment of Mai Lin and her children. CommonSpace understands no response has yet been received.

An asylum seeker, who did not want to be named due to fear of reprisal, told Commonspace that he and his family are “really scared” of a knock at the door early in the morning that could lead to their sudden deportation.

He said: “My wife is having migraines. It’s affected her a lot. And my son is upset – he was born and bred in Glasgow, all his friends are here.”

The man said he has well-documented proof of his persecution but is being threatened with deportation after many years living in Glasgow. His son is scared of being sent to “Africa” because, he told his dad, they have to raise money for African children at school so it must be bad to live there.

“That touched me, as a parent, to hear that from him”, he said.

He also described the abuse they’d received at the Brand Street centre, where one official allegedly told the family: “We don’t want you in this country”.

A spokesperson for the Home Office said: “We respect everyone’s right to peaceful protest. Those with no right to be in the UK should return to their home country and we will help those who wish to leave voluntarily. However, when someone refuses to do so, we will take steps to enforce their removal.”

The Brand Street centre came under fire in 2013 when it put up posters urging refugees to “Go home”, which campaigners called “insensitive and deeply offensive”.

The UK Border Agency have been stepping up the early-morning raids, which see groups of immigration enforcement officers storm homes and arrest those due for deportation. The practice caused outrage, particularly its effect on small children, and in 2005 a campaign to end dawn raids, famously headed by the ‘Glasgow Girls’ teenagers in Drumpchapel, halted all raids.

Powers over immigration and border control remain reserved to Westminster.

A Scottish Government spokesperson said: “The Scottish Government believes asylum seekers and refugees must be treated humanely and fairly, and with their dignity and rights upheld, at every stage of the asylum process. This is particularly important in cases where claims are not successful, where people are returned to their countries of origin and where children are involved.”

The Home Office’s own guidelines on immigration dawn raids state: “Do not visit private addresses either very late at night or very early in the morning.”