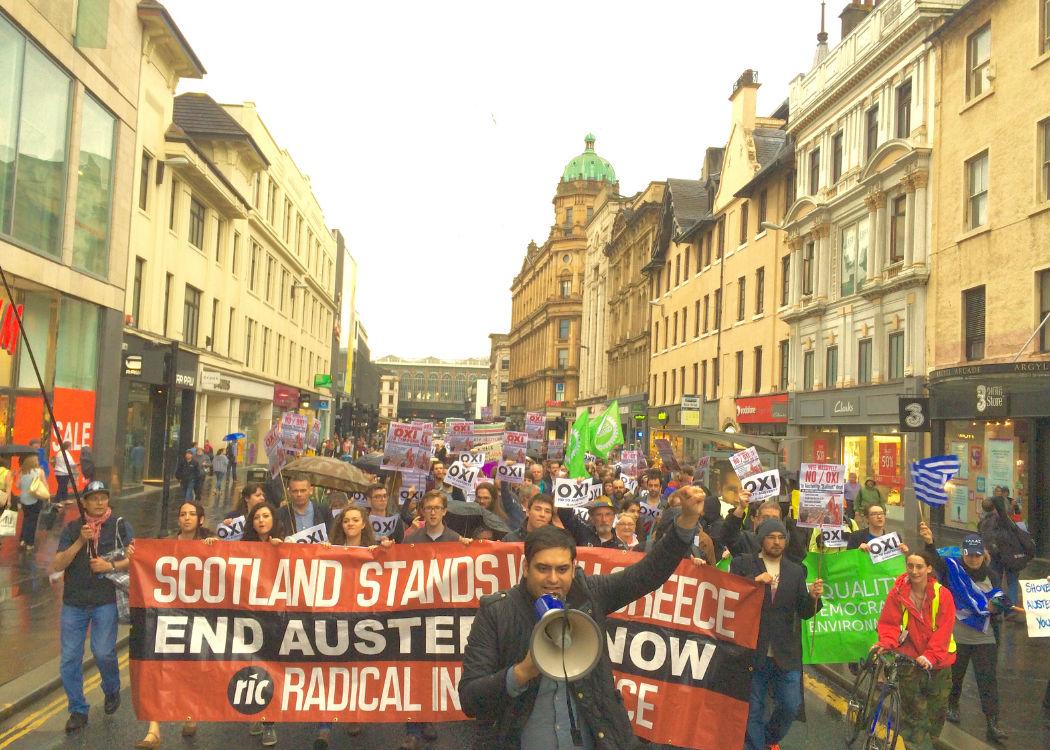 GLASGOW has joined dozens of cities around Europe in protesting in support of a ‘No’ vote at the upcoming referendum in Greece.

Carrying ‘Oxi’ (‘No’) signs, hundreds of demonstrators gathered at the Buchanan Street steps and marched through the city on Thursday before ending with a short rally at George Square.

They chanted “From Glasgow to Greece, no justice no peace” and “the Troika says cut-back, we say fight-back”.

There have been similar rallies held in various European cities including London, Copenhagen, Paris, Lisbon and Barcelona, while a protest at the European Commission in Edinburgh has been called for Saturday.

Greece’s left-wing Syriza government has called a referendum on 5 July on whether to accept the Troika of the IMF, ECB and European Commission’s proposed deal for further austerity measures in return for bailout funds.

“We stand with the Greek people who will be voting No and in doing so rejecting the coercion of the undemocratic European elites.” Jonathon Shafi, Radical Independence Campaign

Prime Minister Alexis Tsipras is urging a ‘No’ vote in the referendum and polls are currently suggesting that outcome could rest on a knife-edge.

Greece, which is close to bankruptcy, has defaulted on a debt to the IMF after failing to repay a EUR1.5bn loan repayment and has had to implement capital controls to stop a run on the banks.

The ‘No’ campaign received a boost yesterday when the IMF admitted publicly that the country is in need of significant debt relief, something that the Syriza government have argued has to be part of any bailout deal.

Jonathon Shafi from the Radical Independence Campaign, which organised the rally, told CommonSpace that Greece is at “the frontlines of the battle against European austerity”.

“The Troika and the corporate media are attempting to blackmail the Greek people, so acts of solidarity like today are important in letting Greeks know that they are not alone,” said Shafi.

“It is clear that austerity has failed miserably in Greece. We stand with the Greek people who will be voting No and in doing so rejecting the coercion of the undemocratic European elites.

“Just as we believe another Scotland is possible, we believe that another Greece is possible too. We hope to be at the European Commission in Edinburgh in even greater numbers to send that message loud and clear.”

A demonstration organised by Syriza Scotland is set to take place on Saturday [4 June] outside of the European Commission’s office in Edinburgh. Click here for full details.