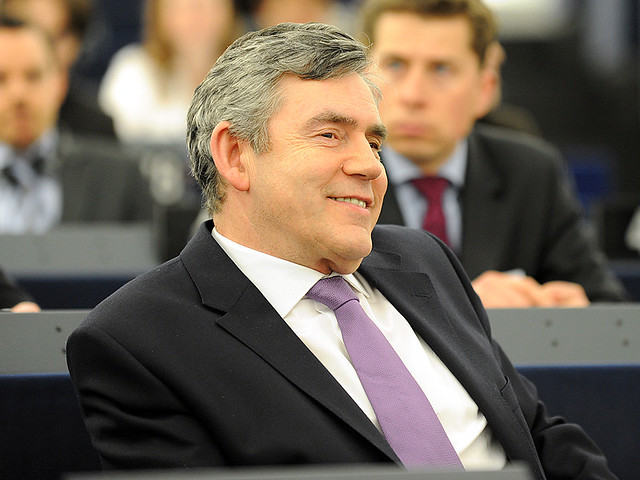 FORMER Prime Minister Gordon Brown will launch a new Scottish think-tank at this year’s Edinburgh Fringe Festival, the first event of which will explore an independent Scotland’s currency options.

‘Our Scottish Future’ will seek to make a “progressive” case for the union, and will kick-off on 30 August with a seminar convened and moderated by professor Jim Gallagher, a former Whitehall official. The agenda “will include discussion on which of the currency choices for Scotland – the Euro, a Scottish currency, Sterlingisation or the UK Pound – is best for social justice and why.”

Announced through an article in the Scottish Daily Mail, Brown warned that Boris Johnson could be the last UK Prime Minister “unless the progressive case for Scotland’s role in Britain is made and strongly made”.

Brown described the UK currently as “united in name only with two extreme and bleak views of our future in head-on conflict”.

“Johnson’s hard-line, anti -European conservatism – which is also seen in Scotland as anti-Scottish – versus the SNPs extreme nationalism, hell-bent on abandoning the UK pound and our 300-year-old single market and customs union,” he said.

Brown warned that the independence case would be sharpened by Johnson’s premiership, saying that “two decades of anti-Scottish invective will come back to haunt him.”

He went on to describe independence as an “even worse financial catastrophe for Scotland’s economy” than a No Deal Brexit.

Brown argued: “For without any real public fanfare, the SNP are now ready to abandon the membership of  both the UK customs union and the UK single market that was first agreed in 1707.

“This decision also means that there is no real alternative to a hard border that would separate an independent Scotland from England.”

Explaining the purpose of the new think-tank, Brown said: “Our Scottish Future will be a coming-together of new ideas in  what we hope will be a think tank dedicated to that progressive future.

READ MORE: The White Paper: 5 ways an indy Scotland will be different

“Our Scottish Future will, of course, expose what is wrong, such as the dangerous experiment of a Scottish pound. But it will do much more than that: it will show how Scotland can stand tall in the world without standing apart from our nearest neighbours and it will demonstrate why Scotland is at its best leading in the UK, not leaving it.”

Responding, Robin Mcalpine, director of the pro-independence Common Weal think-tank, which has published a White Paper on the establishment of an independent Scottish state, stated: “I welcome an open and diverse debate about Scotland’s future. I’ve welcomed it since Michael Forsyth promised a positive vision of the Union when campaigning against the Scottish Parliament 25 years ago. I welcomed it at the launch of the last dozen initiatives which promised to present a positive case for the union. I welcome it once again and hope that for once they can come up with a positive case which can’t be summarised as ‘Scotland is rubbish’. Indeed, I’m sure I’ll be around to welcome a few more of these.

“But while unionists endlessly promise a positive vision they never deliver, Common Weal will keep developing our already rich and fleshed-out positive vision for what an independent Scotland should and could be. If Gordon Brown can finally match that vision after decades of talking about it, good luck to him.”

The currency question was the subject of intense debate within the SNP at the party’s conference in April, where a motion to back the Growth Commission was backed by party members but with an amendment opposed by the leadership which mandated the party to pursue establishing a Scottish currency “as soon as practicable” after independence.