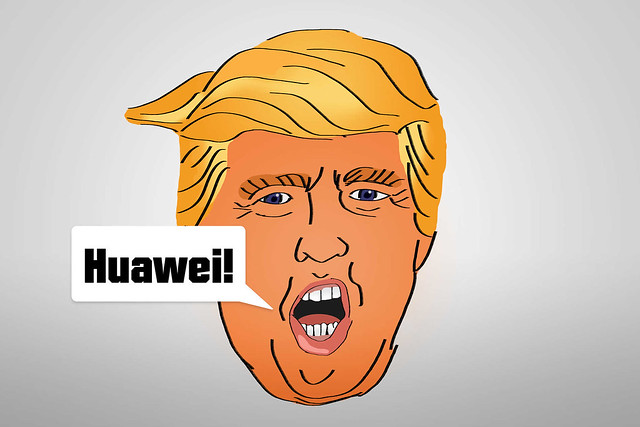 LAST Thursday, ahead of most other countries, a 5G internet service was released in the UK by EE.

Initially it will cover seven cities including Edinburgh and should you have: a) a 5G phone, b) have signed up for the service – initially £54 a month, and c) live in Leith, Broughton, Abbeyhill, Meadowbank, Lochend, Inverleith, Slateford, Saughton or Murrayfield, then you should get an internet speed of around 260MBps, which is expected through time to increase to 1,000MBps or even 10,000Mbps.

This is the start of the future Internet of Things – which promises, laggless gaming, live coverage of smaller sporting events and autonomous or self driving vehicles amongst other things are only deliverable with VERY high bandwidth and fast response times.

Only there is a problem with the EE network being rolled out across the UK, it runs on Huawei telecoms equipment, which the USA security establishment has deemed a) insecure b) subject to the Chinese government spying on all your data.

The fact that there is NO evidence for this does not seem to matter, nor the fact that Huawei and the Chinese Government have categorically denied the claims.

The US is pressurising all its allies in the Five Eyes security network (Australia, Canada, New Zealand, UK and USA) to not only ban Huawei from their security network hardware, which they have done, but to outright ban use of all Huawei equipment. This caused problems when it was discussed at the top Cobra cabinet meeting, with then PM May opposing a ban, as reported to the Daily Telegraph, which the Defence Secretary then leaked, and was subsequently sacked for.

The US is also putting the squeeze on the EU to ban Huawei, which to date they have resisted. They have also placed Huawei on a Blacklist which prevents any American firm from dealing with Huawei.

To date Google have suspended any upgrades to their operating system, which means that the over 200 million customers who bought Huawei phones last year will need to wait for the company to introduce their alternative system to Google, which is expected in a few months, and meanwhile dramatically cuts Googles revenue as they will lose licenses for their operating system..

Other chip suppliers such as Broadcom, Qualcomm and Intel which supply components to Huawei, albeit the chips themselves are often made in China, have been given a 90 day extension so as not to disrupt their production.

This extension merely proves that the claims against Huawei have nothing to do with security, but are simply an attempt to ratchet up pressure on China in the Trump instigated trade war, prior to an expected meeting between Trump and Chinese President Xi at the G20 summit in Japan at the end of June.

To date the trade war has continually been escalated.

Last year, Trump announced 25 per cent tariffs on $34 billion of Chinese goods, to which the Chinese responded with bans on US agriculture imports, targeting Trump’s rural supporters.

Then the Huawei chief executive was arrested whilst changing planes in Canada on supposed charges of dealing with Iran, which is not illegal under international law. She is still fighting extradition to the USA.

Then came the threat to extend the tariffs to $500 billion of Chinese goods, followed by the requests for an outright ban on Huawei.

China is responding with tariffs of its own. It imports $130 billion of US goods, and is also threatening to restrict the export of so called “rare earth” metals, of which they have 80 per cent of the world supply and are essential for  tech and defence companies. If enacted purely against US companies, that restriction would hugely damage US industry.

What is behind all of this is a sudden realisation from the USA that China is threatening to take over:

President Xi has in fact set the aim of China to be at least on a par with the West in a range of key future technologies by 2025.

Trump suddenly fears the loss of US dominance and has decided to fight back, not only against China, against the EU, Japan, India, Canada, Mexico, Venezuela, Iran, North Korea, Palestine etc. Indeed anyone who challenges the US in any way. This is largely portrayed as appealing to his electoral base, and indeed it has so far.

It is also enormously destabilising to the world economic order which since the ‘70s has been based on deregulated finance capital and free trade of goods. Free trade achieved the twin aim for America of getting the cheap goods and raw materials it needed, and flooding the world with US Dollars (through being the world’s currency i.e. printing money costs nothing). Both these strengths have been undermined over the last 20 years, particularly since the banking crash.

READ MORE: Ben Wray: How the explosion of the Chinese middle class will change the West

China is threatening to challenge the dollar and has begun to finance the world’s infrastructure through the Belt and Road initiative, which stretches to Greece. Most of this trade is conducted in Chinese Renminbi and so bypasses the dollar. This is designed in part to ensure that China has access to the world’s resources, in much the way that Britain did in the 19th century and America in the 20th.

The US believes it has the upper hand in the trade war as China exports much more, even though the US consumer will pay more as a result. China refuses to back down and if it instigates a freeze on exports of rare earths, builds indigenous tech without US components, ignores the US exports by building ties with India, Russia and other Shanghai Cooperation Organization members, of which there are eight accounting for 20 per cent of the world economy and 40 per cent of the world population (plus associate members and observers accounting for much more), it clearly can withstand US pressure. In fact, over coming years it can emerge as the dominant power on the planet, as it was for most of the last 2,000 years.

What will Trump and the US do?

Many observers believe a deal will be reached next month at the G20, Huawei sanctions will be lifted, trade will resume, Trump will claim victory and go on to win in 2020. This would not solve the US’s problems, however, as China will trust it much less.

Other observers believe the US will threaten “hard power”. John Bolton, Trump’s National Security Adviser, is insane enough to do this. He after all was part of orchestrating the fake evidence that caused the Iraq War. He may choose a conflict in the China Sea, defeat the Chinese navy (it only has two bought in aircraft carriers) and attempt to force a deal in US interests. China however, would not back down. It is capable of sinking any US vessels in the China Sea as was shown in a US war game some years ago. It is a nuclear power capable of destroying the USA and the world. It has many alernative methods of wreaking havoc on the USA, not least through cyber attack, the supposed pretext for the current trade war.

Hopefully, this scenario won’t happen, it would certainly lose Trump the election and create enormous risks to the planet.

Most of the talk in the media during Trump’s visit to the UK will be about Brexit – but Huawei, the US-China trade war, and whether Britain will be an obedient follower of Trump’s aggressive strategy will be what the Americans will be most interested in getting answers on.

As the faux Chinese curse goes – May you live in interesting times!

CommonSpace is entirely funded by regular, small donations from you: our readers. Become a sustaining supporter today.