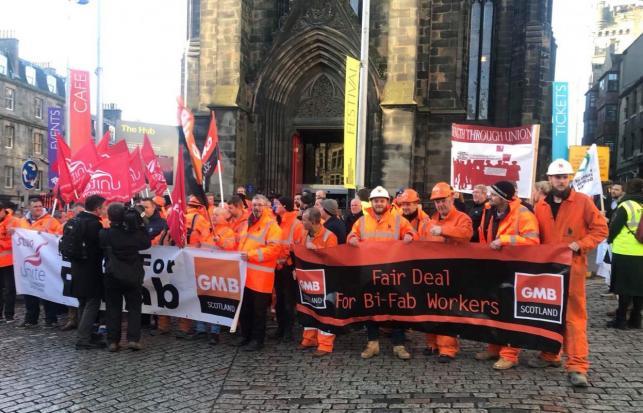 Holyrood’s Economy, Energy and Fair Work Committee heard calls for companies that are subsidised by their governments in defiance of European rules on state aid to be banned

THE BiFab engineering firm, which fell under Canadian ownership after facing near-collapse last year and last month lost out on the multi-billion pound work underway on offshore wind farms in the Moray Firth, cannot compete with other private companies that are significantly subsidised by their governments, MSPs have been told.

This follows warnings from trade unions that the Scottish industry risked losing many of the contracts for work in the renewables sector due to “state sponsored companies and companies who hold an unfair commercial advantage,” as well as “economies which do not necessarily apply labour standards that we would recognise.”

BiFab, which came perilously close to going into administration last year, was acquired by Canadian company JV Driver through its subsidiary DF Barnes in an agreement brokered by the Scottish Government, which remains a minority shareholder of the firm.

However, BiFab’s Methil and Burntisland fabrication yards were shut during their financial troubles in 2018, and were depending on a contract for Moray Firth wind farms to reopen. After its failure to secure that contract, MSPs today [23 April] considered BiFab’s future.

Speaking to Holyrood’s Economy, Energy and Fair Work Committee, Bill Elkington of JV Driver told MSPs that BiFab cannot compete against rivals which enjoy state aid that allows them to run up enormous losses, saying: “We are competing against companies that are allowed to lose 35 per cent of their revenue.

“We are not going to be able to commercially compete with that.”

Elkington went on to argue that hopes for a 1,400-strong workforce returning to BiFab’s Fife and Arnish yards would not be fulfilled until new regulations are imposed to ban companies which break rules regarding state aid.

Elkington’s call echoed those of GMB Scotland and Unite, which wrote a joint letter to First Minister Nicola Sturgeon prior to the committee meeting, arguing that the bidding process for contracts such as the Moray wind farms was uneven and using the Spanish state shipbuilders Navantia as an example.

The letter states: “We are therefore specifically asking that the committee consider the potential commercial advantage Navantia have through Spanish State support including the mitigation of company debts, in contrast with BiFab.”

Unite’s Pat Rafferty told the committee: “We seem to be abiding by them (European laws on state aid) but it seems to be getting ignored by the Spanish and elsewhere.

“We seem to be abiding by them (European laws on state aid) but it seems to be getting ignored by the Spanish and elsewhere.” Unite Scottish secretary Pat Rafferty

Rafferty continued: “I think if we continue in the way that we are in terms of how these contracts are getting awarded then we (Scotland) certainly are not going to be the Saudia Arabia of renewables.

“They will be getting built in Saudi Arabia and shipped across here. And that’s something that we need to try to make sure does not happen.”

Labour MSP Jackie Baillie commented that “the dogs in the street” know that there have been breaches of regulations on state aid in Spain, but also noted that state-backed Spanish companies have not been challenged thus far under state aid rules, and asked why the Scottish Government did not pursue a similar strategy to “create a level playing field”.

Elkington responded by warning that matching foreign subsidies would be like “going down the rabbit hole” and instead recommended “controlling who’s bidding and if they are not living up to the requirements of state aid they should be excluded.”

Scottish Enterprise representative Andy McDonald added that the advice offered to the Scottish Government by Scottish Enterprise had not included the possibility of matching subsidies, because all guidance is intended to ensure BiFab stays within state aid rules.

However, Green MSP Andy Wightman argued that is unclear at present whether state aid rules have been breached or not.

Nick Sharpe, of Scottish Renewables, also said that historic under-investment in UK yards compared to those in Europe had allowed European companies to provide a constant supply of fabricated steel, the quality and cost of which “we are just not capable of, by and large.”

In March of this year, the ScotE3 environmental coalition argued in CommonSpace that the Scottish Government’s efforts to save BiFab “fatally” depended on the private sector, and argued that that taking the firm into public ownership was necessary to both secure its future and help Scotland achieve a ‘Just Transition’ to a renewable economy.

Last week, the STUC published a report arguing that successive Scottish governments had “broken promises” on new green jobs, citing BiFab among various examples of where state-led investment and public ownership could reduce the renewables industry’s reliance on manufacturing imports. Scotland’s trade deficit in green energy, the STUC found, grew from minus £89 million in 2014 to minus £229 million in 2017

Next month, the Scottish and UK Governments will meet at a summit in an effort to ensure UK firms secure a certain amount of the work associated with wind farms based in domestic waters.