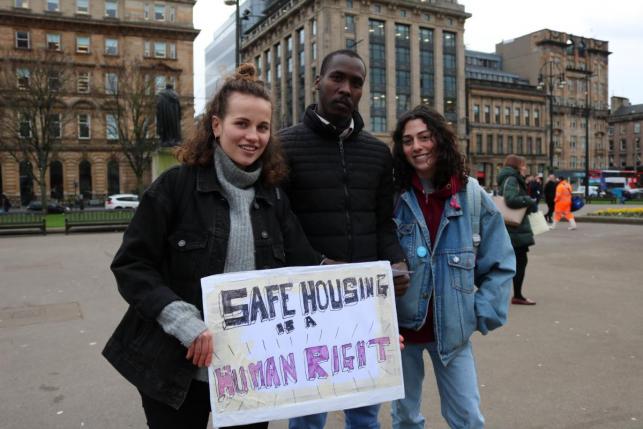 Graham O’Neill, Policy Manager at the Scottish Refugee Council, says the campaign in Glasgow against Serco’s planned eviction of hundreds of asylum seekers has a significance way beyond the city – it’s an important defence of the human rights of the most vulnerable people everywhere

A SUNNY Glasgow morning on 20 June, this year’s World Refugee Day. A time to reflect on and empathise with how war, persecution, abuse and climate change were ripping through people’s lives. Over 70 million in 2018 were torn suddenly from their home and all that was safe, familiar and precious.

In Glasgow’s bustling city centre, we at Scottish Refugee Council were preparing for the launch of Refugee Festival Scotland. We were excited to launch it with Manaf Halbouni’s internationally acclaimed Rubble theatre.

But just a few miles from Manaf’s art, all around us, from Govan to Possil to Parkhead, the Home Office’s private asylum housing contractor, the security multinational Serco, stood ready to swing into action, hand delivering what in effect are 14 “get out” notices to 30 tenants in the public service of asylum accommodation. Over 200 more are to get the same throughout July and August. Forced lock changes are next in the eviction plan.

Serco’s Glasgow contract ends in September this year. However, their asylum accommodation interests continue: in the North-West and a new contract in the Midlands. Contracts renewed and awarded despite fines of almost £7 million for inadequate performance.

These notices were not to fulfil legal procedure. They are the company’s own Notices to Quit, signed off presumably by Serco’s boss, Rupert Soames, and sanctioned by the Home Secretary. Both these men done so at some distance from Govan, Possil and Parkhead.

Those 14 days are expiring, to be followed by forced lock changes only a week later.

We hope the Govan Law Centre legal appeal – about whether the Court of Session decision in April this year was right to conclude that lock changes were lawful against those in asylum accommodation – comes soon. Scotland’s legal community is pivotal in the fight against these evictions.

They know there are housing and human rights principles at stake. They know too that the law is not exhausted on this yet, either in the Govan appeal or in the two other Scottish legal challenges pending. Serco and the Home Office know all this. The recent success of Legal Services Agency in securing temporary postponements of lock changes of five individual asylum seekers reflects the fact that there is protection in the law yet. However, Serco and the Home Office seem fixated on their own rigid timescales for their planned conclusion of the forced lock change.

So what happens if the women and men, penniless, who sought asylum in the UK from countries with abuses, persecution and/or grinding poverty – Iran, Iraq, Sudan, Eritrea and Afghanistan – do not leave for that most relatable human reason: they simply have nowhere else to go and they are terrified of what comes next?

These women and men are existing in precarious conditions, surviving, barely, mainly due to food banks and individual and charitable kindness. At Scottish Refugee Council, we fear the worst if these forced lock change evictions proceed: suicide ideation is increasingly prevalent amongst those refused asylum and destitute that we see in our services. We know some survive by suffering exploitation. Surely, there must be a better way than forced lock changes.

Those seeking, granted or refused asylum in the UK were described by the UN’s extreme poverty expert, Philip Alston, as one of the hardest hit groups by severe poverty in the UK.  We met him during his visit to Glasgow in 2018. He listened. He knows destitution should never be an outcome of the asylum process. However, that is what a forced lock change will guarantee. It is wrong; it is socially unjust but it only thrives in a climate of social indifference. There is no such climate in Glasgow.

That is why what is happening in opposing Serco and the Home Office’s lock change policy in asylum accommodation matters so much. It is not only for those in our city but for all those women and men in other asylum ‘dispersal’ areas in the UK, which is always the communities with the highest levels of multiple deprivation. It is these working-class communities, not affluent ones, which have welcomed those seeking asylum for decades.

Far from living separate lives, there is solidarity between those born into poorer communities and those seeking asylum. Both suffer at the sharpest end of UK Government “hostile environments” be that via austerity or immigration. Both suffer the impersonal, bureaucratic and severest impact of UK policies: for ‘disgraceful asylum housing’, read ‘Universal Credit sanctions’. Too often homelessness is the consequence. In other words, what is happening in Glasgow with asylum forced lock changes by a multinational that exists through public contracts is just one (albeit, severe) symptom of the more pervasive malaise of generational social inequalities across the UK.

So, in Glasgow over the coming week, these women and men may face an unsettling “time’s up” visit from Serco and the Home Office. To reach the nadir of forced lock changes says little about the character of asylum tenants but a lot about the moral vacuum in UK asylum “support” as successive Home Secretaries’ have broken the moral compass that once guided a proud history of sanctuary, with practices of destitution, disappearance or indefinite detention.

The juxtaposition in forced lock changes in Glasgow, at its starkest, is traumatised women and men stripped of rights pitted against both Serco, with annual revenues in 2018 of £2.8billion, and a Home office wedded to an obscene and wrong-headed “hostile environment” policy, as the Windrush scandal has most powerfully exposed with its tragic human consequences.

However, look a bit deeper in an asylum forced lock change and you also see ordinary workers many of whom will not, understandably, wish to be involved, be they a Serco employee or a locksmith contractor. We empathise with these workers. Those with conscientious objections should be able to step away with no employment detriment.

The callous, traumatising and possibly still unlawful act of forced lock changes seem unlikely to be carried out by Ministers or top Serco executives. Whether in Glasgow or, indeed, in the North-west of England, where it has been rolled out since 2018. No, the burden will probably fall on ordinary workers. That just compounds the wrongfulness of forced lock changes.

So, why do forced lock changes in Glasgow matter? It is what they symbolise: a prior, systematic and complete erosion of rights for those seeking, granted and refused asylum in this country. A forced lock change, successfully executed, is immediate street homelessness, on a summary basis, with no apparent rule of law or court oversight. It is a terrifying prospect.

“Glasgow is a proud asylum and increasingly internationalist city. This is in the best traditions of Glasgow’s original housing rights pioneer, Mary Barbour, over a century ago.”

When Serco first announced its lock change plan in August 2018, there was again a unity and mobilisation across Glasgow’s political and civil society and communities, supported by Scottish ministers. Glasgow is a proud asylum and increasingly internationalist city. This is in the best traditions of Glasgow’s original housing rights pioneer, Mary Barbour, over a century ago.

We urge the Home Secretary to order Serco to cease forced lock changes in Glasgow and to commit resources so this vulnerable group can be in safe shelter, receive the requisite support and services, so that their rights are fulfilled and that they can make informed and dignified choices about their future. None of that is possible in destitution.

Let us hope the Home Secretary does the right thing this coming week. If not, then Glasgow and Scotland, through its communities, its campaigning and its courts, must do it for them.