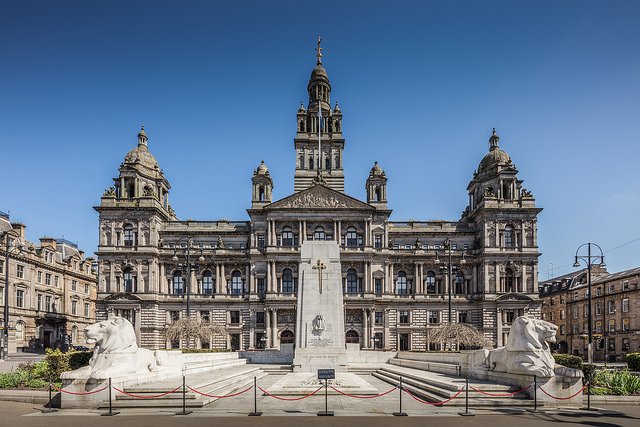 LOCAL GOVERNMENT needs radical reform from the top and bottom to bring power closer to people, ‘Our Democracy’ campaigners have said.

Matt Baker, orchestrator at The Stove Network, a Dumfries-based development trust with over 500 members, and one of the coalition partners in the Our Democracy campaign, told CommonSpace that the organisation feels that it is “working in a vacuum of local democracy”.

“We are filling this void, but with no formal role – I’d like to see reform building us into the structure of local democracy. We need to look at the grassoorts which is growing and give it a more formal role,” he said.

The Our Democracy coalition was established to campaign for radical local government reform, and to encourage people to get involved in their local communities by “acting as if they own the place”.

The campaign will host an event this Saturday (21 April) at Out of the Blue in Edinburgh which aims to begin work on formulating a list of proposed reforms to be included in the Scottish Government’s Local Democracy Bill, expected to be introduced in parliament later this year.

Baker said that, from his perspective, local government needed to be reformed from the “top and bottom”.

“The local government we have at the moment has very restricted responsibilities and powers,” he added.

“If you look elsewhere, for example in Norway, what we call a local authority would be responsible for health, housing and transport policy. Here we have national policy being rolled out through local authorities, so I’d like to see more powers being devolved locally.”

According to the Electoral Reform Society (ERS), another partner in the Our Democracy campaign, Scotland is the “least democratic country in the European Union” in terms of local government representation, with only one councillor for every 4, 270 citizens.

Integrated into any expansion of local government powers, Baker said, must be a greater role for grassroots organisations. “It’s very difficult to connect at an individual level to local authorities, so I think we need to look at the way that communities can be more intimately connected to local democracy,” he said.

READ MORE: Robin McAlpine: Why I wish we could vote in real local elections today

This, he suggested, should involve a system of different tiers, face-to-face consultation forums on areas of policy, and committees where members of local organisations can be represented so that more people have not only a ‘voice’, but real influence on decision making in their local area.

Baker said this was essential to boosting engagement in local democracy, because people need to see the impact that their participation can have.

“It’s not just a case of making the structures and systems to have your voice heard – we need to be able to point to examples so people can see the impact,” he said.

The Our Democracy campaign arose following research commissioned by ERS which showed that 76 per cent of people in Scotland felt they had no or very little influence on council spending or services.

The Scottish Government announced as part of its programme for government in September that it would introduce a Local Democracy Bill following a review of local governance, with the intention of  decentralising power to a more local level and ensuring that local decision making is delivered “not on behalf of a community, but by a community itself”.

However, Baker said he was “not super hopeful” at this stage that this would include the kinds of reforms for which he and others in the Our Democracy coalition are advocating.

“The tendency to date has been one of trying to cut local government rather than support it, so it’s hard to see how anything proposing expanding it will be welcomed,” he said.

READ MORE: Robin McAlpine: Why taking our MSPs out of Holyrood might be better for democracy

“I can see how Holyrood sees local authorities as a big expense, but I think that’s a short-sighted economy. If we’re looking to meet all of our hopes of social justice across society, we need to give people a bigger stake in decision making – it’s an imperative.”

The Scottish Government’s draft budget for 2018/19 included what the Convention of Scottish Local Authorities (Cosla) said amounted to a real-terms cut to local authorities of £153m, but in order to secure the support of Green MSPS to allow the budget to pass, the government agreed to provide £170m more than initially proposed, resulting in a real-terms increase.

Baker said that budget constraints facing local authorities meant that it was ever more pressing that the current system of governance be changed.

“We’ve ended up in a really dependent relationship with our local authorities – they’ve taken on so much and the way we deal with issues is to kick local authorities to do stuff, but that’s not sustainable,” he said.

That being said, Baker said that “community empowerment” shouldn’t simply mean leaving everything to communities; a notion, he said, that people have “a lot of distrust” about at the local level.

“Communities don’t have the capacity to fill that role, and local authorities have a lot of experience to offer. What we need is to broker that relationship,” he added.

The event on Saturday will hear from a range of speakers, including journalist Lesley Riddoch, Andy Wightman MSP, local government spokesperson for the Scottish Greens, Willie Sullivan from the Electoral Reform Society Scotland, and Neil McInroy of CLES, a progressive economics thank tank which first piloted the community wealth building approach in Preston.

Alice Kinghorn-Gray, who is coordinating the event on behalf of the Our Democracy campaign, commented: “Under the current system of local governance in Scotland, power is exercised by people vastly removed from local communities, who do not necessarily have the interests of those communities at heart.

“Across the country people are demanding a greater say and it is common sense that human beings flourish when they have control over their own lives.

“I would encourage anyone with an interest in local democracy to register for Impact and to help us reclaim power for our communities.”

The discussions taking place at this event, as well as a number of deliberative events in small communities, will feed into a national conference this summer where a full reform agenda will be set out.

Other coalition partners include Common Weal, The Democratic Society, Scottish Rural Parliament, and the Centre for Scottish Public Policy.  Registration for the event is available here.