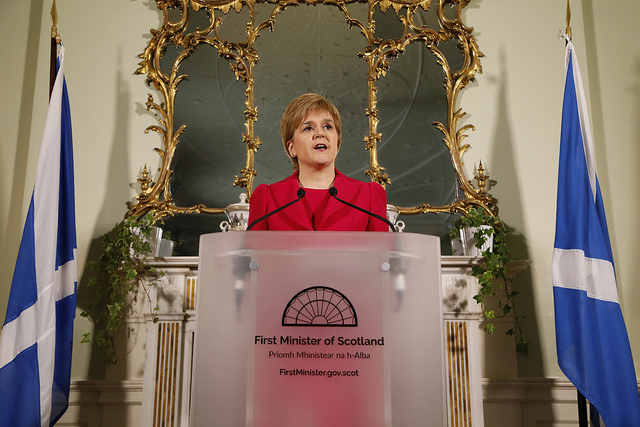 With the ‘Sustainable Growth Commission’ report due to launch, the SNP has announced plans for engaging members through a summer of National Assemblies

AHEAD OF Friday’s (25 May) launch of a 354-page report outlining the economic case for independence commissioned by the SNP, First Minister Nicola Sturgeon said the recommendations will “inform debate” and has announced plans to engage party members in this process – a position which grassroots activists say is the way forward for policy development and the independence campaign.

Produced by the Sustainable Growth Commission, a working group chaired by Andrew Wilson, former SNP MSP and founding partner at influential PR firm Charlotte Street Partners, the much-anticipated document will outline opportunities for growth in the present and with independence, sustainable public finances, and currency options for an independent Scotland.

Members will be invited to the Assemblies over the summer. Each assembly will consider one section of the report and will be chaired by the new party’s depute leader.

READ MORE: Sturgeon says Growth Commission final report to be published in next few weeks – but hasn’t seen it yet

Commenting ahead of the report’s launch, SNP leader and First Minister Nicola Sturgeon said it would “herald the start of a debate based on hope and ambition about the future of the country” and consider how the challenges facing Scotland can be addressed.

She said: “Scotland has strong foundations in business, in innovation and in our talented workforce – but we need to maximise our strengths to match the economic performance of successful independent nations of comparable size.

“At a time when economic thinking and debate is heavily focused on how we limit the damaging impacts of Brexit on Scotland, this report provides an opportunity to step back, to look at Scotland’s economic future with optimism and to focus on how we seize our opportunities and achieve our full potential as a nation.

“It is not a report about the timing of a referendum – rather, it focuses on the ‘why’ of independence and how we can use the powers it will deliver to build a stronger economy and a fairer society.”

Many grassroots independence supporters – not only those who are SNP members – will certainly view the document’s contents with interest and will be keen for the opportunity to engage on its proposals.

SNP member and candidate for the depute leadership Julie Hepburn told CommonSpace that she welcomed the plans to hold National Assemblies and hoped the idea might be extended further to support engagement on “a whole raft of policy areas”.

“One of the things I’ve been campaigning for is to bring policy development closer to members,” she said. “One thing I’ve been proposing is that instead of just national or regional assemblies, we should bring the policy process to the branches, so that for people who can’t make it to those events, there is still the opportunity for as many people to get involved as possible.”

This Sunday (27 May), members of the pro-independence grassroots will attend The Gathering in Stirling, organised by the National Yes Registry (NYR) with the aim of formulating strategies at a local and national level on how the grassroots can effect change and influence debate.

READ MORE: Analysis: Independence has a movement – but does it have a strategy?

Jason Baird, NYR coordinator told CommonSpace that while Sunday would likely be too early to have a meaningful discussion on the contents of the extensive report, he expected that the matter of “how to engage with it” would be on the agenda.

“The Gathering is about working out what methods the grassroots movement can use to come together to influence these kinds of things, because there’s not a single voice that can talk about this,” he said.

Baird said he saw it as a positive sign that the government intended to hold the National Assembles. “It’s a good idea to get as many people involved as possible – not just the grassroots but the public generally,” he said.

“It’s a difficult thing for government to do, because governments are top-down and the grassroots is bottom-up, so it’s difficult to find an interface between those, but it’s absolutely right that they’re trying their best to do it.”

Baird said it was vital for the grassroots to engage with the government and ensure that its voice is heard in the debate. “It’s a pro independence government, so how do we interact with it?” he said.

Recalling the 2014 referendum in light of the seemingly renewed national conversation on independence, he added: “Last time there was an official Yes Scotland, and there was the grassroots, and by the end they were not the same thing at all, so it will be interesting to see how those structures form this time.”

The SNP has said that the report, entitled ‘Scotland – the new case for optimism: a strategy for inter-generational economic renaissance’ will demonstrate that, “overall, comparable small country economies perform better than those of larger countries such as the UK”.

The depute leader will be announced at the SNP’s Spring conference on 8 June, between candidates Julie Hepburn, Inverclyde council leader Chris McEleny, and MSP and cabinet secretary for the economy, jobs and fair work Keith Brown. Brown and McEleny had not responded to a request for comment by the time of publication.