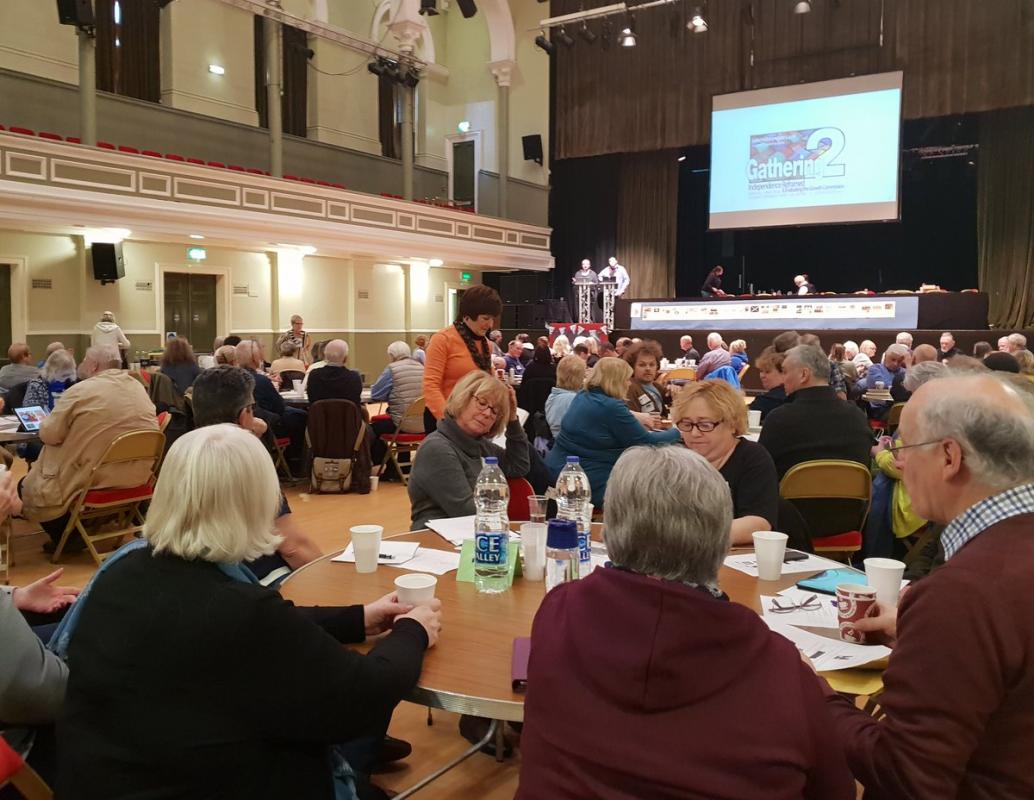 THE largest grassroots consultation of the independence movement on the Growth Commission began on Saturday [26 November], with attendees critical of plans to use Pound Sterling after independence, saying it would “undermine the prosperity and values of an independent Scotland”.*

The Gathering 2, organised by the National Yes Registry, brought together just under 200 activists from local Yes groups around the country, and was co-ordinated with the SNP as the start of an official independence movement consultation on the Sustainable Growth Commission report, which was published in May on the economics of an independent Scotland.

The Growth Commission report, which was chaired by former SNP MSP and corporate lobbyist Andrew Wilson, has proved highly controversial within the independence movement for its proposal to continue to use the pound Sterling and plans for fiscal consolidation after independence.

Following three SNP National Assemblies in Ayr, Aviemore and Edinburgh over the summer on the report, which all saw criticism of the GC’s currency plan, Ian McGlade from Yes Bellshill reported back from the Gathering’s currency group to the assembled attendees, and gave a rounded assessment of why an independent Scotland having its own currency is essential.

He said the group “compared two scenarios around what happened with the financial crisis a few years ago”: Greece and Iceland.

“Greece had tied itself to the Euro, when they hit financial problems they had no say really about what they could do. Opposite scenario is Iceland, which never joined the Euro. The banking crisis hit Iceland quite bad because they were quite vulnerable to how much banking is done in their country. Because they controlled their currency they were able to devalue their currency and do what was needed to get them back to where they wanted to be,” McGlade stated.

He said this showed why there was a need for “Scotland’s Currency for Scotland’s people.”

“People are Scotland’s greatest asset. In order to harness and nourish that asset we have to control our own currency. Scotland currently does not have its own currency because it is controlled by the Bank of England. [We give the scenario] of one brother who has been controlling the currency for years, and she [the sister] is now taking back control of deciding what it’s worth, and that’s where we see ourselves – our neighbours shouldn’t be controlling what we do.”

McGlade went on to criticise the GC report’s conditions for considering a shift to a Scottish currency. The report proposes five tests which include a break between rUK and an independent Scotland’s business cycles and the buildup of adequate foreign currency reserves.

“Currency is…by far the most controversial and talked about aspect of the Sustainable Growth Commision report. In order to meet our aspirations for our people, country and economy, we feel the Growth Commission conditions to be met to transfer to a Scottish currency would undermine the prosperity and values of an independent Scotland,” he said.

McGlade added: “We feel at the earliest opportunity we need to build a robust financial framework for control of our currency.”

Keith Brown, SNP deputy leader, also addressed the Gathering, and said that the top message to come of the National Assemblies was the need for “clarity of the message”. He said the second top issue was currency.

“A lot of folk are very concerned that Scotland should have its own currency,” Brown said. “It actually changed a bit during the course of the three National Assemblies, people saying that we have to have our own currency, we don’t want to wait 10 years for it to happen, but we understand that an interim period is perhaps desirable.”

Brown added that the Gathering was the biggest discussion on the Growth Commission taking place outside of the SNP, and that he wanted to get the wider Yes movement involved in that discussion.

He hoped that the Gathering and wider independence movement would look beyond just the currency issue when evaluating the GC report.

“Things like currency are very important, but there’s a lot to the GC, a lot of it which is not nearly attracting as much public attention but which I think is really important, things like tax reform, which I understand might not be the most exciting thing in the world, but is really important to the future economy of a future independent Scotland,” he said.

Jason Baird, co-ordinator of the National Yes Registry, said that the Gathering focused upon “what do we need to do to win”, and said the wide ranging discussions would continue to be developed afterwards on the group’s IndyApp.

“The IndyApp is going to take the discussions at the Gathering and open them up right around the country. Anyone can join and get involved in one of the different groups, which looked at everything from Currency to co-ordinating national events.

“I want to thank all of the attendees – without them there would be no Gathering at all, so I’m very grateful for their participation.”

On the Growth Commission consultation, Baird said that the Gathering was “just the start of conversation” which would go on to take place on the IndyApp and in local Yes groups. a process which could lead to the Yes movement submitting feedback to the SNP before its Spring conference.

“The purpose was as much education as it was a consultation,” Baird added. “We want to find out what we think about it, and then if we think it is useful we’ll use it, if we don’t we won’t.”

It is expected that the Growth Commission will be debated at the SNP’s Spring conference next year, having been kept off the agenda at the annual conference last month.

SNP leader and First Minister Nicola Sturgeon is under increasing pressure to set out a timeframe for independence after the conclusion of Brexit negotiations between the UK and the EU. She told the Scottish Parliament in June 2017 that she would make a statement on plans for a second independence referendum once the terms of the deal were clear.