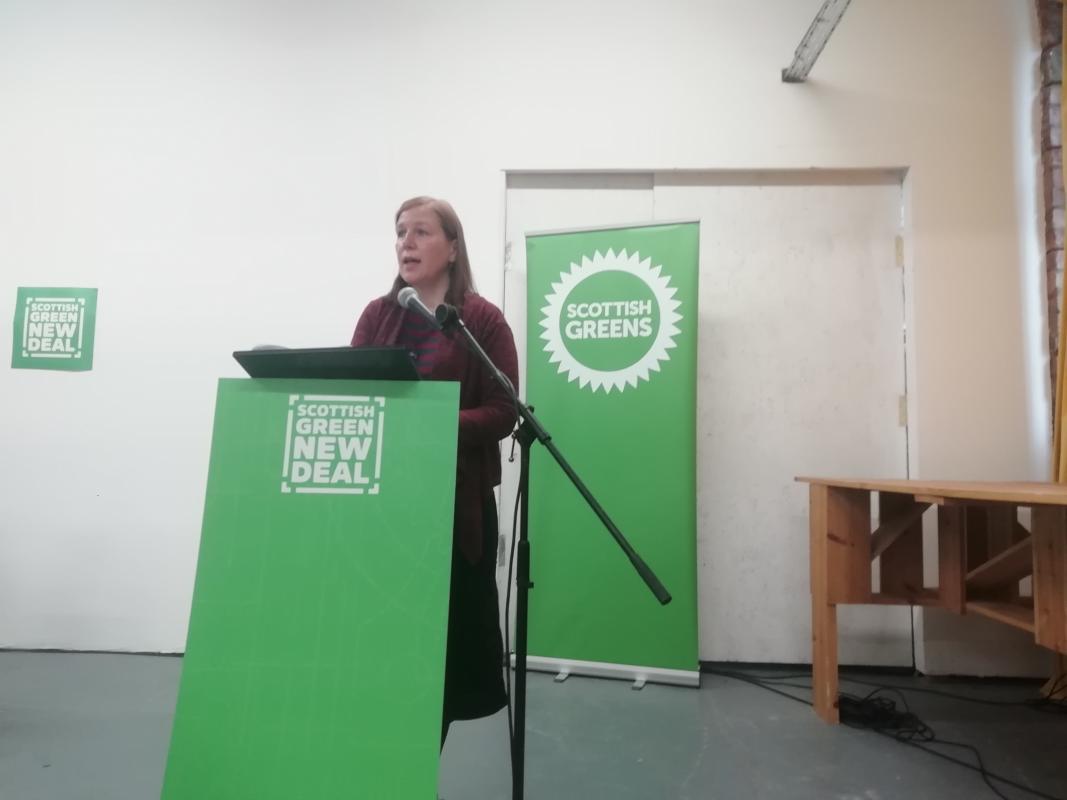 THE Scottish Greens published a set of measures for a Scottish Green New Deal on Thursday, arguing that Scotland needed an “interventionist state” if it is to rise to the challenge of the climate emergency.

The idea of a Green New Deal, based on the name given to US President Franklin D. Roosevelt’s massive state investment strategy which helped lift America out of the Great Depression in the 1930’s, has attracted global attention over the past year, after being backed by US Presidential hopeful Bernie Sanders and high-profile congresswoman Alexandria Ocasio-Cortez as means to tackle inequality and address climate breakdown while modernising economic infrastructure.

SNP leader Nicola Sturgeon said to the STUC conference in May that she also backed the idea, but the Greens are the first party in Scotland to publish a set of proposals under the Green New Deal (GND) rubric.

The paper argues for a multi-pronged approach to green public investment in Scotland, including increasing the share of infrastructure spend devoted to low-carbon projects from 31 per cent currently to 70 per cent; making GND the long-term purpose of the new Scottish National Investment Bank; making the City Region Deals fully aligned with GND priorities; and establishing a National Energy Company as “both a renewable energy supplier and generator.

The paper also backs the “Preston Model” of community-based economic development, where councils support the development of local co-operatives which maintain wealth in the local area.

“This kind of systemic change can improve a city’s sustainability and quality of life for its residents,” the paper states.

Other proposals in the Scottish Green New deal document include: the “entire” public sector estate is mobilised via procurement and land use programmes to support renewables development; a target to increase forest cover to 40 per cent, the EU average; establish a Union Engagement Fund which would help trade union representatives in the workplace support low-carbon transition; and a new funded programme of “deep-retrofits” which prioritises transforming the most energy inefficient houses to make them the highest energy efficiency rating.

Speaking at the launch of the Greens Scottish Green New Deal paper in Glasgow, the party’s co-leader Patrick Harvie insisted it wasn’t a manifesto, and that the ideas would be “fleshed out” ahead of the 2021 Scottish elections. He admitted that the proposals are at this stage not costed, but that they will have “a fully costed document” ahead of the Holyrood elections.

“But it’s not just about spending the money, it’s about what economy we want,” he added, pointing to the example of land value capture – a proposal which would allow public bodies to buy land at use value rather than market value – as a way in which policy changes can reduce the cost of a Scottish Green New Deal.

Harvie said the Scottish Green New Deal was “not just about how we invest in low-carbon, but how we build an economy for everyone”. He said the “public-sector and the power of the state played a critical role” in advancing the GND.

While the proposals are based on the powers the Scottish Parliament has currently, he said that a GND could help “develop the case for independence by using the powers we have now to set the agenda for the sort of independent Scotland we want”.

Asked about how an independent Scotland could use monetary policy differently to further a Green New Deal, Harvie mocked the “there’s no money left” letter left by a former Labour minister when the Tories came into power in 2010.

“That’s utterly meaningless,” he said. “Government’s have the power, and should take the power again, in my view, over the money supply. Some on the independence side want to emphasise what you can’t do, rather than demonstrating what you can do with the powers of independence.”

Harvie described the UN Climate Summit, which looks likely to come to Glasgow next November, as an “incredible opportunity” to push an ambitious climate change agenda in Glasgow and Scotland.

Glasgow Green Councillor Martha Wardrop (pictured) highlighted the Council’s new target of being carbon neutral by 2030, saying that the Green New Deal proposals “could help deliver that goal”. Wardrop made the case for a Glasgow based public energy company, a city-wide Just Transition plan and “the acceleration of district heating” as key measures that Scotland’s largest city had to take to move its emissions reduction agenda forward quickly.

Lorna Slater, newly elected Scottish Greens co-leader, who works for a tidal energy company, said that renewables investment was “the basis for a new economy” and that the technologies needed to develop it were “ready to go; it isn’t fantasy”.

On funding the GND, Slater said it “isn’t a question of having enough money, it’s about having the will, having the priorities.

Scottish Greens Climate Change spokesperson Mark Ruskell MSP said that even if Donald Trump was right about climate change not being an issue, “we’d still be doing a Green New Deal”.

“The urgency for this comes from climate emergency,” he said.

Ruskell highlighted three areas where the GND was vital: transport, land and housing. Transport carbon emissions continue to rise in Scotland, and Ruskell said that the dealing of the A9 road between Perth and Inverness, an infrastructure project anticipated to cost £3 billion, was an example of the wrong priorities in transport infrastructure, highlighting the re-opening of the Leven railway line only set to cost £70 million.

The Climate Changes spokesperson said that land was “on the frontline of the climate emergency”, calling for 40 per cent of Scotland to be covered in new forest, and an end to “the scandal” of one-fifth of Scotland being used up by grouse moor shooting estates. Ruskell called for a shift in subsidy priorities in agriculture to go towards farmers who are managing land sustainably.

In housing, Ruskell said four-fifths of all housing in Scotland remains energy inefficient, with one in four people in fuel poverty, saying this was “a scandal in a country that is so energy rich”. He called for the creation of “net-zero houses”, which are built to export energy to the grid.

Scottish Green MSPs have had substantial influence over the Scottish Government’s annual budgets in recent years due to the SNP minority relying on their votes for a majority. Asked what their red lines would be in relation to their GND proposals in the next Scottish Budget, Ruskell said that would be for members to decide, with a motion to the party’s annual conference in October on this issue.

“The Climate Bill is equally as important as the Budget. The Bill will have a target [net-zero by 2045] but it also needs the tools to meet those targets.”

Commenting on the Scottish Parliament 2009 Climate Change Act, which at the time introduced world-leading targets for carbon emissions reductions, Harvie said that he was one of the MSPs who was “cheerleading” the ambitious targets at the time, but that in analysing the trajectory of carbon emission reduction since then, he had come to the conclusion that it “didn’t make a difference” in terms of its effect. The Scottish Greens co-leader called for “social movement pressure” to ensure that the new Bill is beefed up to tackle climate emergency.

Asked about whether Boris Johnson could scrap the Scottish Parliament in future, following his move on Wednesday [28 August] in proroguing the House of Commons, Harvie said he found it “unlikely” that he would go that far, but that “Ministers had already given themselves the power to strip away, sideline and narrow down the powers the Scottish Parliament does have”, highlighting the Westminster ‘powergrab’ of EU powers which were due to go back to Holyrood following Brexit.

“We no longer have even the devolution settlement we had 20 years ago. It’s been shot through,” he added.