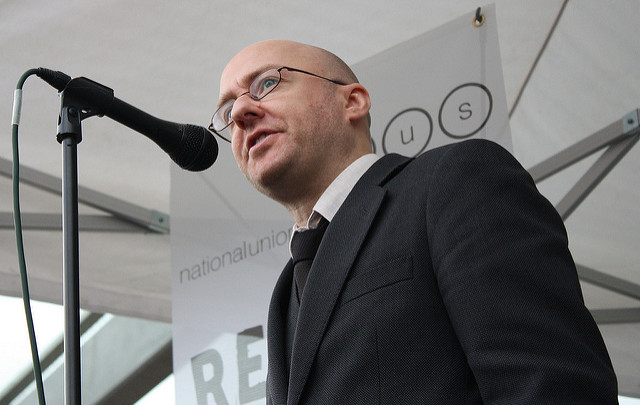 The national budget must not become “an annual rear-guard action against local cuts”, says Patrick Harvie

THE 2018-19 BUDGET for Scotland is expected to pass its final stage today (21 February) thanks to support from the Scottish Greens, who have argued to further reforms after winning concessions on local authority funding.

In January, the Scottish Government reached a compromise with the Scottish Greens, without whom the SNP minority administration was unlikely to pass a budget, resulting in a commitment to £170m more for local authorities than originally outlined in the first draft of the budget.

Following the successful passage of reforms to Scotland’s income tax system in parliament on Tuesday, the Scottish Government have stated they will use devolved income tax powers to ensure an additional £428m in 2018-19, and that the resultant budget will protect public services that are free at the point of use, increase the health budget by £400m and provide above-inflation investment in police, universities and colleges, and local government services.

Finance Secretary Derek Mackay commented: “The Scottish Government has faced continued austerity from the UK Government. Over a ten year period, Scotland’s block grant will have been cut by £2.6bn in real terms and we face a £500m real terms reduction in spending on day-to-day services over the next two years.

“The Scottish Government has faced continued austerity from the UK Government. Over a ten year period, Scotland’s block grant will have been cut by £2.6 billion in real terms.” Finance Secretary Derek Mackay

“Our progressive approach to reforming income tax will deliver greater tax fairness and protect the lowest earning taxpayers in Scotland. By using our devolved income tax powers we will ensure we have an additional £428m next year to support a Budget that will help mitigate UK budget cuts, protect our NHS and other public services, support our economy and tackle inequality in our society.”

The newly approved income tax proposals will see a new five-band system come into effect from 1 April, and will create a 19p starter rate for low-earners and a 21p intermediate rate for those earning over £24,000. 1p will also be added to the higher rate, leaving it at 41p, and the additional rate, leaving it at 46p.

As a result of negotiation with the Scottish Greens, the higher rate threshold will be extended from earnings of £44,274, as originally envisaged by Mackay’s first draft, and will instead be set at £43,431.

Ahead of today’s Stage 3 debate, which will seek the Scottish Parliament’s final approval of the budget, the Scottish Greens welcomed its expected passage, with Scottish Green co-convener Patrick Harvie MSP arguing that £157m worth of proposed cuts to Scottish councils will be “more than reversed”.

The Scottish Greens have highlighted the 73,000 public sectors workers who will get a pay rise as a result of the concessions they won, as well as an extra £2m to cmbat fuel poverty, a reduction in high-carbon capital projects, extra measures to protect Scottish marine life and a new community rail fund.

“The SNP used to be among the loudest voices calling for an end to the unfair Council Tax and before the last election they invited all opposition parties to take part in the Commission on Local Tax Reform.” Scottish Green co-convener Patrick Harvie

However, Harvie remained critical of current tax arrangements for local authorities, and argued that local tax reform was necessary to prevent the annual Scottish budget process being “annual rear-guard action against local cuts”.

Harvie, who also acts as the Scottish Greens’ finance spokesperson, commented ahead of the budget bill going before parliament, saying: “Communities throughout Scotland will, as a result of this deal, receive an additional £170m for local council services, an agreement that more than reverses the £157m of local government cuts proposed by the SNP.

“What’s more, we’ve made this year’s budget fairer by ensuring 73,000 more public sector workers, such as nurses and teachers, get an inflation-based pay rise and that 56% of people in Scotland will pay less tax in the coming year, while high earners contribute more.

“Yesterday in parliament, we saw Green MSPs support the Income Tax Rate Resolution. Again today, we’ll show that the Green approach to politics – constructive and challenging – gets results. As a result of our work Scotland is going beyond just tweaking the existing system and is instead setting rates and bands that are more proportional to people’s incomes.”

Harvie continued: “However, we now need to follow through on this progress we’ve made on income tax, and advance the case for local tax reform. The SNP used to be among the loudest voices calling for an end to the unfair Council Tax and before the last election they invited all opposition parties to take part in the Commission on Local Tax Reform. The result was a clear set of recommendations which must not be allowed to sit gathering dust on the shelf.

“The SNP has stalled on local tax reform since last year, but that cannot last. We have made it clear that the national budget process much not become an annual rear-guard action against local cuts and local tax reform is therefore an issue which should wait no longer.”

The SNP had previously advocated the replacement of Council Tax, which relies on property valuations widely regarded to be outdated and which takes no account of the income of those being taxed, and following its victory in the 2007 Scottish parliamentary elections, planned to replace Council Tax with a local income tax. However, this was stalled when the UK Government stated it would withhold nearly £400m in Council Tax Benefit if the proposals were implemented.

Scottish Labour have argued that the budget deal between the SNP and the Greens will still leave local services with a £386m shortfall, citing analysis by the Convention of Scottish Local Authorities that Scotland’s councils require £545m to maintain current levels of service.

Scottish Labour’s shadow cabinet secretary for finance James Kelly said: “The SNP-Green budget stitch up leaves local services with a £386m shortfall. No amount of spin from Derek Mackay and Patrick Harvie alters the fact that they are still delivering an austerity budget.

“This budget tinkers around the edges on tax when real change was required. Services will be cut as a result.” Shadow Cabinet Secretary for Finance James Kelly

“Once again it is local authorities bearing the brunt of austerity thanks to decisions made by the Greens and the Nationalists.”

Kelly continued: “In recent weeks we have seen proposals from councils across the country leading the fight against poverty – such as initiatives in North Lanarkshire to deliver free school meals to the poorest children all year round. That’s the kind of radical action we need from councils to tackle the shame of 260,000 children living in poverty.

“This budget tinkers around the edges on tax when real change was required. Services will be cut as a result.

“Labour would ask the richest to pay their fair share with a 50p top rate of tax, and use the revenues to properly fund public services and tackle poverty.”

Also responding to the expected passage of the budget, Scottish Conservative finance spokesperson Murdo Fraser has argued that the SNP have broken a 2016 manifesto pledge not to increase income tax, comparing the Scottish Government’s income tax reforms to the UK Government’s raising of the tax-free allowance, which Fraser claims has been done “without penalising those earning a bit more”.

Picture courtesy of the National Union of Students Scotland