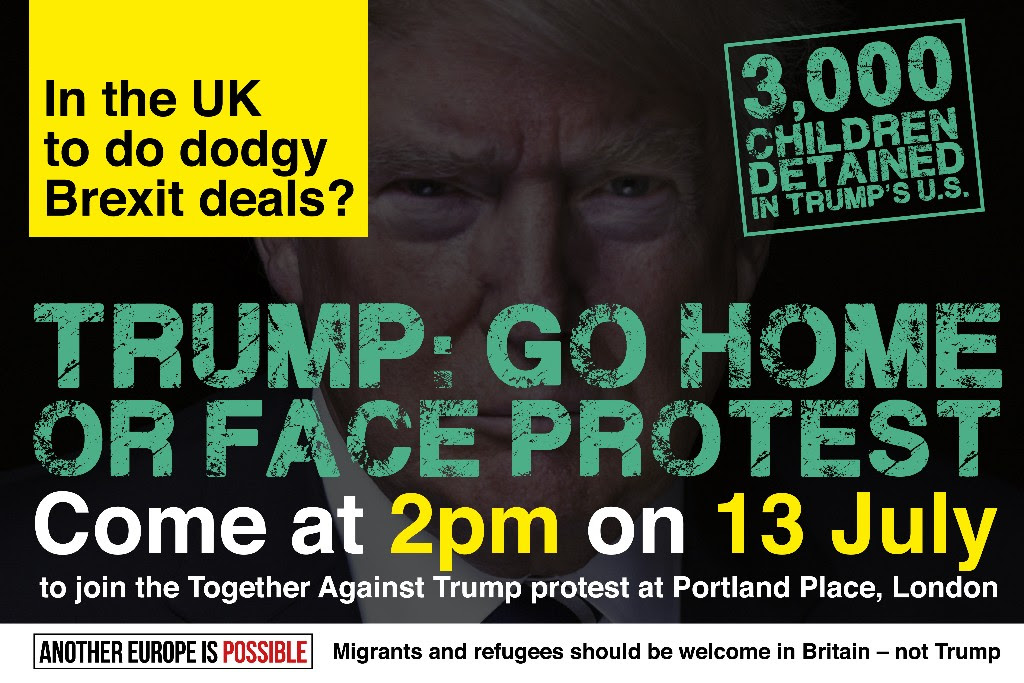 THE MOVEMENT opposed to the state visit of US President Donald Trump will not just oppose the man but also the politics he represents when he visits Scotland later this week, according to organisers, with some of the biggest protests ever seen in Scotland expected to take place.

Trump touched down in the UK today [12 July] and was greeted by UK Prime Minister Theresa May.

Speaking to CommonSpace, organisers behind the Scottish protests against the visit from the controversial American President said that there was a growing sense of outrage amongst ordinary Scots who oppose the politics that Trump represents.

Tens of thousands of people are expected to join the Scottish protests against the visit, and some of the biggest demonstrations the UK has seen since are expected in London throughout the president’s visit.

The Scottish Government has encouraged those attending protests to do so “peacefully and safely”, but insisted that the first minister would still consider meeting Trump if his officials request a meeting, something which looks an increasingly dim prospect as the US President is set to be greeted by Scottish Secretary David Mundell MP.

Kirsty Haigh, an organiser from Scotland United Against Trump, spoke to CommonSpace about the building mood around the protests: “Trump is kidding himself if he thinks he will receive a warm or even quiet reception in Scotland. We’re going to have thousands of people out on the streets making it clear that Trump, and the politics of Trump, are not welcome here in Scotland.

“We’re going to have two massive days of actions with a rally in Glasgow and national demo in Edinburgh which people from across the country are attending. We’re all coming together to stand up for those affected by the politics of Trump, protest his abhorrent behaviour and make it clear we will not tolerate our governments pandering to the politics of Trump.”

Read More: Putting the radical-right ‘back in their box’: How do we defeat Europe’s growing populist movement?

Haigh told CommonSpace that the protests would be about more than Trump himself, but also about the politics he represents: “We’re never going to sit back and allow Trump’s politics of greed and hate to become the new normal. We’re coming out to say we do not support this dangerous and divisive politics. Trump threatens efforts towards tackling climate change, fighting discrimination, inequality, peace and disarmament.

“At the very moment when the world needs more solidarity, more cooperation and a greater commitment to justice, he proposes to build walls and wants to turn us against each other.

“These demonstrations aren’t just about standing against Trump’s terrible fascist politics but they are also about solidarity. They are a way of us showing our support for all those groups under attack.

“Lastly, these actions are a way of making it clear to our politicians that we will not tolerate any emulating of Trump’s politics and that there are lots of things that we can, and should, be doing better here.”

Another organiser behind the marches, Jonathon Shafi, told CommonSpace: “There is a real mood building around the Trump demonstrations. People are getting in touch from across Scotland, and we think there is going to be mass opposition on the streets.

“This won’t just be opposition to Trump, but to the whole of the far-right across Europe too. It will send a message that we are not going to let fear and division win out. I’ve spoken to loads of people who have never marched before but who are going to be on the streets. Make sure you are there too. Now is the time to stand up and be counted.”

Both the Scottish Greens and Scottish Labour have organised for their members to join the marches, and many SNP politicians are expected to attend informally.

When you get loads of messages coming through saying things like “all my friends are going and they never march” you know it’s going to be big. #ScotlandAgainstTrump

In a joint statement, the respective party leaders said: “It is now confirmed that Donald Trump will visit Scotland this weekend, after he was invited to the UK by Prime Minister Theresa May.

“Donald Trump is not welcome here.  The horrific scenes at the Mexican border are a repudiation of decent human values. Caging children like animals is barbaric. We cannot roll out the red carpet for a US President that treats human beings this way.

“From his disgraceful equating of anti-fascist campaigners with Nazis in Charlottesville, his withdrawal from the Paris Climate Agreement, to his Islamophobic travel ban and his misogyny Donald Trump has demonstrated that he should be denied any kind of welcome.

“Scotland can and should work for peace and co-operation in the world. To this end we believe that all avenues must be used to ensure that Donald Trump does not receive a welcome here. For Donald Trump to travel to Scotland with public assistance and ease when his travel ban has caused outrage and despair around the world would simply not be acceptable. 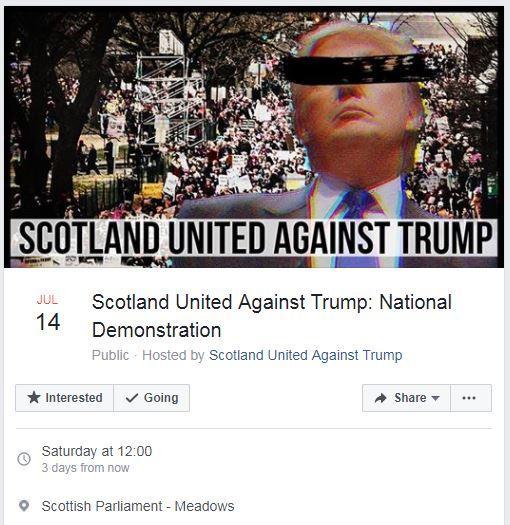 Ahead of Trump’s anticipated visit to his Trump Turnberry Resort in South Ayrshire, a petition was launched on Wednesday night – with over 4,000 signatures so far – calling for Police Scotland to allow clearance for a Baby Trump blimp to be flown near the resort during his visit. According to the petition, “police on the ground will allow it with the authorisation of pertinent parties”.

The petition aims to demonstrate to these parties that there is a “clear and substantive public interest in it flying”, as per the right to protest protest peacefully under the the European Convention on Human Rights and the Human Rights Act 1998.

Scottish trade unions are also expected to mobilise members for the demonstrations, and Scotland’s tenants union Living Rent will also be present.

A spokesperson for Living Rent said: “We understand the issues that lead people to fall for the narratives of people like Trump. We are facing a crisis of low income and high living costs in both America and the UK. Trump and his UK counterparts would have you believe this is down to immigration; too many people are coming into our country and taking all the homes and jobs – meaning there are less for the rest of us.

“We deal with the effects of the housing crisis every day, and we like to think we are familiar with the issues surrounding it; and we can tell you right now that migrants and refugees are not the problem. There are 5000 empty homes in Edinburgh alone – if high rents were because there are not enough houses, how can there be so many spare?”

Activists from Stand Up to Racism have already began protesting at Turnberry, with more expected to join over the weekend during the president’s visit.

Major demonstrations will also take place in Edinburgh and Glasgow, with protesters rallying in George Square, Glasgow at 5pm on Friday 13 July. In Edinburgh, a march starting at the Scottish Parliament on Saturday at midday will go through the city, past the Amercian consultate before ending at the Meadows.