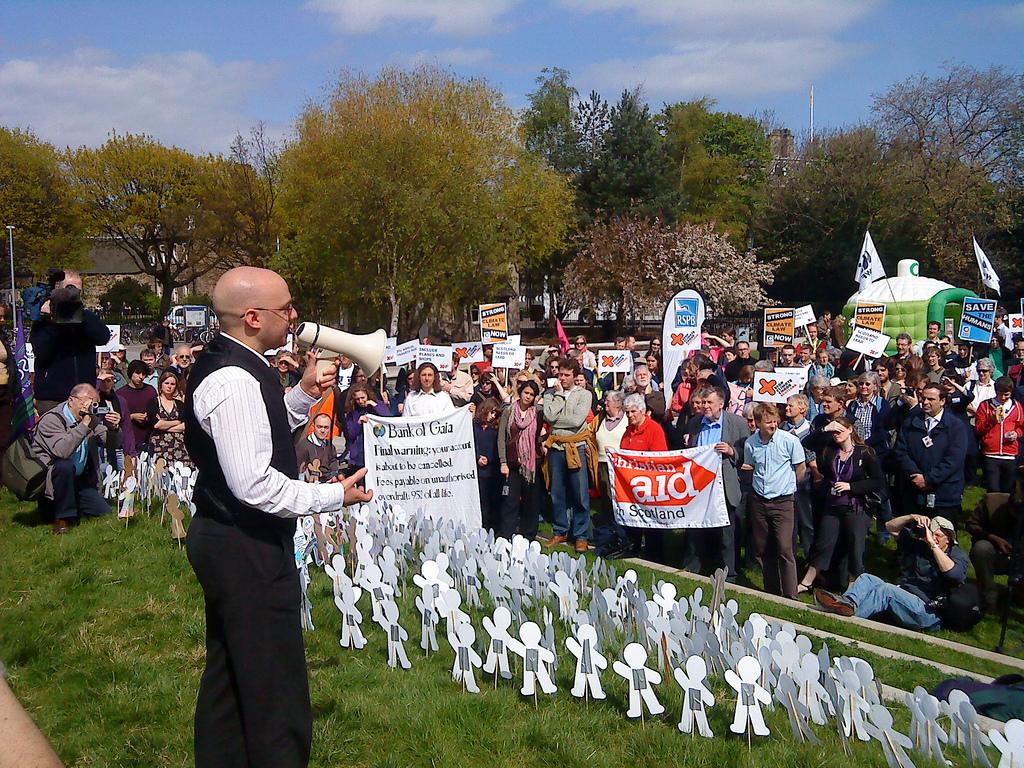 With a year till the Scottish Parliament elections, CommonSpace talks to Greens co-convenor Patrick Harvie MSP about the party’s aims to increase its representation at Holyrood, and its longer term ambitions for the planet

In the shadow of the General Election result, it’s understandable that even the left-wingers who gained votes – like Harvie’s party – feel under the weather of the most right-wing government in living memory.

“Dispiriting would be the least of it,” the Glasgow MSP tells me in his HQ.

“It’s deeply dangerous for a great many people in society, especially on planned welfare cuts. They [the Tories] clearly don’t give a damn how they are going to achieve them. They picked on a number before they even started figuring out how they’d reach it.

“They don’t care how they are going to be achieved. That is a source of outright hostility for people who are unable to defend themselves. It’s grim. It’s grim.”

In our thirty minute interview that was Harvie at his most passionate; angry even. Most of the time the high profile environmentalist and independence campaigner comes across as calm, thoughtful and optimistic about the future.

“I think it’s healthy if governments are held to account effectively by people who are not unremittingly hostile”. Patrick Harvie MSP

He has reason to be. While the Tories swept back to power, Greens in England crossed one million votes. Green membership in Scotland rocketed since the referendum and the party has its sights set on next May’s Scottish elections for a major breakthrough.

A ‘Green surge’ – possibly through the list votes of SNP supporters and disaffected Labourites – could even see the party become the major opposition block in the Scottish Parliament. Athough that would require channelling the campaigning tsunami that inspired 1.6 million Yes voters and a SNP landslide to back a smaller, left-wing, pro-independence party.

“Going from the position we’re in now – with just two seats – to that position would be a big ask. I’m convinced that we can get regional MSPs elected, plural, in regions right across Scotland. If we do that we then have a position to advocate for that positive Green message and to keep the government accountable,” Harvie states.

“I think it’s healthy if governments are held to account effectively by people who are not unremittingly hostile, but willing to strike a balance between being constructive and being challenging. I think that’s the way the Scottish Parliament should work.”

Following the resignation of Jim Murphy, the Green Party immediately focused its pitch on that ground: different from the SNP, but not so aggressive as to scare away any of its supporters. When the Holyrood elections come round millions of voters will have to consider how best to use their ‘list vote’ – which benefits parties who don’t win constituency seats. It wouldn’t be the first time the Greens had benefited from this.

“Back in 2003 I know there were Labour folk in Glasgow, including elected Labour councillors and MSPs at the time, who knew that a regional vote for Labour wasn’t any use to them. Some of them voted Green,” Harvie recollects of the campaign that saw the Greens reach a peak of seven seats.

“I suspect in any region in Scotland, if SNP folk are going into the next election convinced that they are going to win all the constituency seats a lot of them will wonder what the best way is to use their regional vote.”

“Similarly, there will be a lot of people who have been voting for Labour who maybe are never going to vote SNP but are increasingly thinking ‘What is my party doing?’ The more the Labour Party struggles to find an answer to that question the more the Greens will appeal to those voters as well.”

A party source told The Herald newspaper that this Green strategy will call on SNP and Labour voters to support the Greens as honest, left-wing challengers to keep any party of government in check and progressive.

“I don’t think the social, economic and ecological crisis of our world are going to be solved looking back to a former political model.” Patrick Harvie MSP

The Greens won’t be the only ones trying to gain parliamentary representation by that vehicle. As we meet, the Scottish Socialist Party are set to host its conference – the party subsequently voted to talk about an electoral alliance with the Scottish Left Project. So why vote Green rather than socialist, I ask Harvie?

His response is diplomatic, with criticism of SSP schisms understated: “I think we’ve shown since 1999 a track record of consistently advocating for principled Green positions and being constructive about that. We’ve done it in a coherent way, working together.”

“There are folk in the SSP that I have a lot of time for and a lot of respect for, but they did suffer from this tradition that socialists movements tend to, of finding it very difficult to work together, never mind working with other parties and trying to find common ground.

“One of the things that makes me happiest about being in the Greens rather than in any other party is that I know so many people whose instinct is not to pretend we don’t have difference but not to obsess about them.

“That’s aside from the policy side. What’s needed at the moment isn’t just the core stuff about moving beyond Gross Domestic Product growth, but actually trying to be open minded about the future.

“I don’t think the social, economic and ecological crisis of our world are going to be solved looking back to a former political model. I think we have to be open to new ideas and new economics. I think that’s where the Greens are.”

So, in the politest of Green fashions, Harvie differentiates himself from the socialist tradition of state ownership, strikes and more confrontational rhetoric.

But consensus building cannot avoid tough yes or no questions, like the one his party will face over a second independence referendum.

“I don’t want to scrape by with 51 per cent. I want a clear and decisive choice to be made.” Patrick Harvie MSP

I ask him whether it should feature in the party’s manifesto.

“Too soon to say,” he replies.

“I don’t always agree with the current Scottish Government on every issue but I think when Nicola Sturgeon says something really substantial has to change that’s probably a fair comment.

“If the new Tory government decided to renege on promises to deeper devolution, if they were utterly unwilling to negotiate on making the proposals that came out of the Smith Commission workable, if there was a complete betrayal on those issues then a lot of people might think the time was right to put the question again.”

But, perhaps most importantly for those who want an independent Scotland, is timing a campaign for a decisive Yes vote correctly: “In terms of the strategic objectives for those who want to see independence, really we need to recognise that we didn’t just lose. We had some really difficult issues that a lot of people found it difficult to get over like the currency offer. If we’re going to go into another referendum that has to be a much stronger offer.

“Any government that wants to put another referendum forward to win it, would be well advised to wait until the public demand from outside of the pro-independence movement is irresistible. I don’t want to scrape by with 51 per cent. I want a clear and decisive choice to be made. If we went into another referendum right now that wouldn’t happen.”

Sometimes the Greens are treated like the also-rans at a school sports fare: congratulated for taking part, but never recognised as equal, political competitors. It’s clear from Harvie’s position on the Holyrood election and independence that he wants that to change with political victories.

However, he also takes a broader view than each electoral cycle. One of the most memorable moments of the General Election was during a BBC debate when Harvie was asked for his ‘red lines’ for any coalition deal at Westminster. The journalist suggested that ending capitalism would be a Green red line. So is it?

“I don’t think we need to end capitalism. I think capitalism is in the process of ending itself. It’s a system that cannot be sustainable. It means it cannot last. It means it is out with the limits that the planet and physics lay down,” Harvie says.

“Capitalism is just too ruthlessly efficient at extracting value from people through exploitation of labour, from the environment through exploitation and over harvesting of finite resources – whether that’s oil, fish, forests, you name it. It’s efficient at extracting value from the global commons, the things we all rely upon as a shared life support system.

“The challenge of turning that around is profound and it means that a new economic system arises.

“Capitalism is a finite period in human history and what comes afterwards may be better or may be worse. That’s the issue that’s still open to be contested. Does the next chapter in human history start contributing to the global commons?”

The electoral stepping stones in the months ahead are, in this sense, just part of the Green master plan for human and planetary survival.

Whether Scotland is ready to embrace “post-capitalism” through a ‘Green surge’ remains to be seen. Harvie and the Scottish Greens are ready for the challenge.