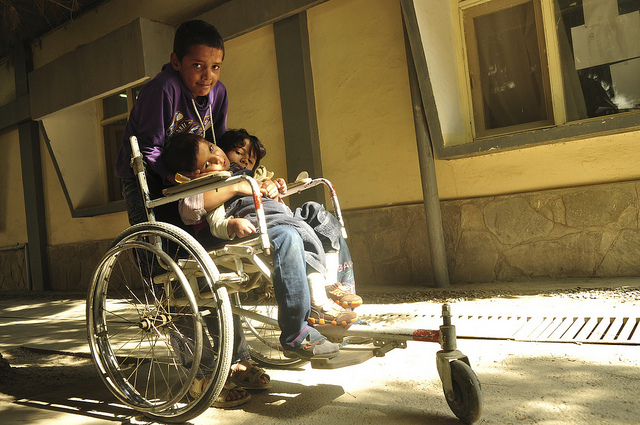 Growth Commission argues an independent Scotland’s foreign aid approach should “meet its obligations via a funding of UK programmes for a transitional or, indeed, an extended period”

GLOBAL justice campaigners have told CommonSpace that it would be a mistake for an independent Scotland to follow proposals in the Growth Commission to pay into the UK’s Foreign Aid programme, arguing that a bespoke aid policy could be based on “a completely different set of principles”.

The SNP’s Growth Commission, chaired by corporate lobbyist and former SNP MSP Andrew Wilson, published its report last Friday [25 May], and argues that an independent Scotland should pay annual solidarity payment’s to the rest of UK for debt obligations and shared services, part of which should include paying Scotland’s share of international aid contributions directly “to meet its obligations via a funding of UK programmes for a transitional or, indeed, an extended period.”

“The Annual Solidarity Payment is modelled at around £5 billion including debt servicing contributions, 0.7 per cent GNP contribution for foreign aid and a further £1bn set aside for other shared services,” the report argues.

0.7 per cent of gross national income is the UN mandated obligation for all countries contribution to international development.

Commenting, Liz Murray, Scotland organiser for Global Justice Now, said that the Growth Commission’s proposals would mean an independent Scotland would be part of a UK foreign aid programme that is not about economic justice for the world’s poorest countries

Murray said: “While we entirely support the commitment to spending 0.7 per cent of gross national income on overseas aid, we don’t agree with the Growth Commission’s suggestion that Scotland pay into and align itself to the UK Government’s overseas aid programme.

“Under the current Westminster government’s leadership, the Department for International Development’s strategy is increasingly based on a failing model shaped by the government’s preference for privatisation, big business and ‘free market’ models of development – and a misguided and outdated belief that growth in the richer parts of society will inevitably ‘trickledown’ to help the poorest.

“Instead, with more powers or with independence, Scotland could do something quite different and could base its overseas aid programme on a completely different set of principles.

“So, we could look at overseas aid as a form of global wealth redistribution from the richest to the poorest and as compensation for the fact that countries like ours got rich by pulling resources out of developing countries.

“And we could ensure that that money strengthens public services, builds democratic economies through not-for-profit, public-public partnerships that help build infrastructure, and helps recipient governments stand on their own feet by providing direct budget support.

“And it could help fight injustice by putting women’s movements at its heart, since they are best placed to tackle injustice and bring about lasting change.”

In 2016 Global Justice Now published a report alongside AidWatch criticising the privatisation of the UK International Aid programme.

The report identifies Adam Smith International, a London-based consultancy, as a leading benefactor of a new model of UK aid delivery which hands whole programmes to companies like ASI, which received £450m from the UK Government from 2011-2016, and has executives on “six-figure salaries” and made £14 million in profit in 2014 alone.

“UK aid is being spent on projects to expand the private provision of basic services in poor countries, help governments write more ‘business-friendly’ laws, and support public-private partnerships in infrastructure,” the report found.

The UK Government suspended a ASI foreign aid programme in December 2017 after a Panorama investigation alleged that the scheme, which was supposed to be supporting community-led police forces in Syria, was ending up in the hands of militias accused of torture and summary executions. ASI said the claims were “false and misleading”.

Haigh said: “We know that the UK Government currently abuse the aid system – to them aid is never just aid. They give money expecting a lucrative arms deal, favourable trade deal or business opportunities for UK firms.

“This desperately needs to change. This could be an opportunity for Scotland to recreate our aid policy. We could create a policy that focuses on cancelling debts and allowing countries to help themselves rather than the current colonialist approach our aid policies too often take.”

Allan, who has been international development and Europe minister since 2016, indicated to CommonSpace that having an independent foreign aid policy remained the SNP’s post-independence vision.

He said: “The Sustainable Growth Commission has made a very welcome and very considered contribution to the debate about a better future for Scotland.

“In terms of the SNP’s own position on International Development, the Scottish Government is very happy to work collaboratively with the UK on this already. In the scenario of independence, transitional arrangements to ensure smooth delivery of ongoing international development programmes would be the responsible thing to do.

“Beyond that transition, we would want to see Scotland have its own International Development programme, seeking to emulate the successes of our Scandinavian neighbours and meeting the international 0.7 per cent target on national contributions to international development.”

Craig Dalzell, head of policy and research at the Common Weal think-tank, said that it may be difficult for an independent Scotland to extract itself from UK foreign aid policy and the annual solidarity payments once they have been established on a permanent basis.

“Ultimately, foreign aid – no matter how worthy and necessary, has an essential political dimension to it,” Dalzell said. “The projects a country funds, the people it helps, the people it chooses to not help and the people it actively works against are all reflections of the vision that country has of what the world should be. By tying Scotland to the UK’s vision, it will severely limit its own and prevent us from making our own distinct mark upon the world. Its one thing to say ‘eventually’ Scotland would have its own programme, but the decision to change funding targets is itself highly political.

“Once Scotland has bound itself to the UK’s aid programme post independence, there is a very real possibility that the political capital to make changes simply never materialises. There is a very real risk that ‘eventually’ having a distinctly Scottish vision of the world we want to live in simply becomes ‘never’.”

The Annual Solidarity Payment proposed by the Growth Commission brings together “in the same mechanism” payments for a “reasonable share of the servicing of the net balance of UK debt and assets” with “payment for continuing shared services and co-operation”, based on a “tone and approach” in Scotland-rUK relations which is “respectful and as close and positive as between any countries anywhere”.