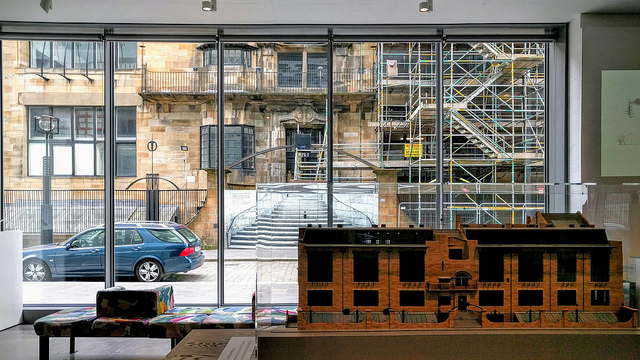 Eileen Reid: “The seeds of the Mack’s destruction were sown long before both fires”

A FORMER senior member of staff has said that management at Glasgow School of Art (GSA) should take some responsibility for the second fire in four years at the Mackintosh building, detailing a series of claims alleging warnings were ignored in the run-up to the 2014 fire and staff asked to keep quiet in the aftermath.

A fire last Friday [15 June] evening devastated the world famous Mackintosh building, which was under restoration after the 2014 fire. GSA director Tom Inns said earlier today [19 June] that the building would be saved “in some form”.

The cause of the fire is as yet unknown, but the GSA has said that Keir Construction, the firm undertaking the restoration work, was responsible for fire safety on sight. Keir Construction has stated it implemented an agreed fire safety strategy following the 2014 fire but has not confirmed if it was operational on Friday evening.

Writing in the Scottish Review magazine today, Eileen Reid, former head of widening participation at GSA, said it was wrong that GSA management had not taken any responsibility for either fire.

Reid stated: “People are cautioning, correctly, against attributing blame prior to the investigation. But much of the anger is about GSA’s refusal to take any responsibility – for either fire. Of course an investigation must take place to determine the cause of this latest disaster; but the immediate cause isn’t the crucial point. The real question is, why? And why twice?”

Reid, who left GSA in November 2014, claimed “the seeds of the Mack’s destruction were sown long before both fires”, making a number of damning claims, including:

Reid did say “management is not entirely to blame, even if it’s tempting to do so in anger”, but went on to accuse GSA management of “hubris”.

“The punishment for hubris is its inevitable downfall,” she surmised.

Reid’s remarks come after the spotlight in the wake of the fire had been on Keir Construction, which had just last month been slammed for “omissions and inadequate installation” of fire safety requirements in an inquiry into DG Leisure facility in Dumfries, which Keir project managed, and ended up costing more to repair than to build due to the extent of faulty construction work.

Professor John Cole, who led the inquiry, stated: “This Inquiry would particularly wish to bring attention to the extensive failures in regard to the omissions and inadequate installation of fire-stopping discovered throughout the DG One building.

“The scale of these omissions served to completely compromise the fire safety strategy for the building.”

There is no suggestion Keir Construction was responsible for the Mackintosh building fire.

A Keir Construction spokesperson said: “An agreed fire safety strategy was implemented for the build phase of the Mackintosh restoration project, which combined measures for the protection of all those entering the site to work and to alert the authorities in the event of an outbreak of fire.

“These included a smoke and heat detection system and regular evacuation tests as well as 24 hour, 7 days a week security and fire warden patrols by a team of three guards, originally appointed by the client after the 2014 fire and subsequently by Kier.”

He stated: “Unfortunately Glasgow is no stranger to serious fires, with nightclubs in particular. It’s not just two fires at the School of Art, or Victoria’s nightclub this year. In 2004 The Shack on Pitt Street was completely destroyed by a fire that started in Trash, another nightclub.

“It’s clearly not enough to leave the protection of our built environment to ad-hoc investment in structures with special heritage value; we need to take collective responsibility for this issue.

“The public, especially those going for a night out in the city, need reassurance that our buildings are safe. Preserving the magnificent heritage so often found within our buildings is absolutely necessary, but not sufficient in itself. The Minister today acknowledged that waiting for buildings to catch fire before reacting isn’t good enough, and I hope that Friday’s devastating events become a turning point, and the start of a more robust approach.”

Glasgow council leader Susan Aitken said on Saturday that she would be convening a Sauchiehall Street taskforce “to plan the area’s future”.

Replying to a request for comment on Reid’s claims, Glasgow School of Art said they were too busy to respond by time of publication.