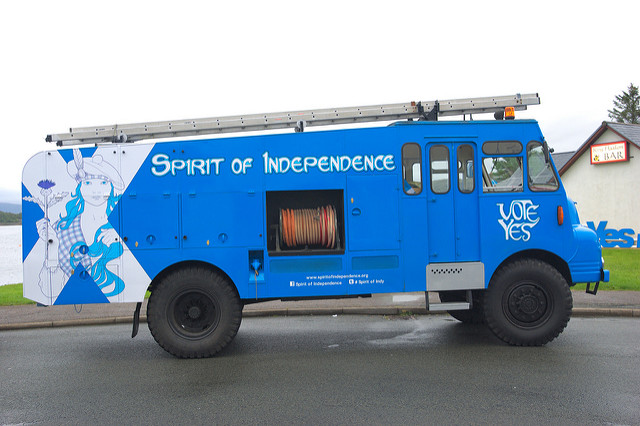 Guy Ingerson, co-convenor of the Aberdeen Greens, argues that a depiction of Aberdeen and Aberdeenshire as increasingly conservative leaning is far from true – the independence movement has to appeal to diverse demographics within, as well as between, regions

DEBATE, DIVISION AND DIVERSITY are words we’ve heard across the independence movement in the last few years. The growth commission debate was particularly revealing and reflective of all three of these words. Initially I was horrified at the vitriol directed at those who critiqued the document, then I was amused as the report became a wounded animal to assemble around for discussion and finally I realised that this was the debate that was missing from our movement in 2014.

Back then our differences were largely buried in the campaign. One party’s vision, the SNP’s vision, dominated the movement. In large part due to their unprecedented Holyrood majority. Now the setting is different.

The Scottish Greens hold the balance of power in Edinburgh, the Tories have made their greatest gains in Scotland in over 20 years and the Labour Party seems more concerned with repeatedly punching themselves in the face. Amidst all of this, the debates we have as a movement are bound to be more heated. However in my view all of this is a chance for the Scottish independence movement to mature into the genuinely pluralistic movement we need to win.

Division is often the word banded about by our political opponents. Division can be terrible, just look at what division can do to families crossing the Mexican border or to the many lost forever in the Mediterranean Sea.

To a far less extreme degree I’ve experienced how division can lead to extremely counter-productive local political disputes within the movement. This was my initial experience in the Aberdeen Independence Movement when I was elected as one of its first co-convenors in January. My affiliation as the Aberdeen Greens co-leader proved problematic for some in the group and, despite my previously having been in the SNP until 2015, a number of clashes ensued. Situations like this have happened across Scotland. Who can forget the infamous Yes East Kilbride battle about gender balanced speakers?

When divisions are exposed however…they can be an opportunity to shake up a stagnant and moribund political system. Independence is exactly that. Our movement’s differences can help us see ourselves and what matters to us. Across Scotland these differences can show us to the answers we seek, answers to that crucial question: What kind of country do we want to live in?

My experience in AIM allowed me to re-focus on my priorities for an independent Scotland. A decentralised nation of economic, social and environmental justice.

One, that Aberdeen’s ‘nationalism’ is more conservative and based on identity. This isn’t the Aberdeen I know and was highly concerning to me considering our cosmopolitan population. Aberdeen has a higher than average percentage of people originally born overseas. It’s vital that these new Scots feel included in our movement.

Looking at the information available from the 2017 UK General election we can see who voted what across the Moray, Aberdeenshire, Aberdeen and Angus. The votes tallied as so: 134, 413 to Conservatives, 115,436 to the SNP, 46,597 to Labour, 18,818 to the Lib Dems and the Greens didn’t stand candidates. Looking at these figures alone I can see why people would draw similar conclusions. However, the biggest figure was the 163,795 people that didn’t vote at all, these are the people we need to inspire. Our region is far more complicated than it appears.

This brings me to the second divergence with Alan’s analysis; that the Radical Independence Campaign may have lost more votes in 2014 than they gained. This was a shock to many in the area from across the political spectrum. RIC’s role throughout 2014 was to get those who had never voted out to the polling booths. They did this by a forensic focus on working class parts of the city, earning plaudits from the SNP and the Greens. All the evidence shows that their strategy worked. It’s important when building a movement to build through this kind of cooperation.

Sitting more to the centre-right on economic questions than myself, I can see why Alan’s instincts move him to different conclusions. However we cannot win over those voters who lent their votes to the Tories by moving to the right. In the UK we’ve seen what has happened when the Tories and Labour tried to out UKIP each other. We’ve seen across Europe a similar move to the right.

“Nationalism based on identity” is a dangerous road to go down. Where we do agree is on the need for tailored messaging and campaigns for the highly diverse regions of our nation. When we relate independence to the daily issues people face then we can connect with voters. Personal, local and national independence should be our goal.

This diversity of opinion should be seen as a strength and encouraged. After 11 years in power, there is a large contingent of people who disagree with the SNP’s domestic policies. Again we seen this in 2017. The SNP got 38 per cent of the vote but the polls showed that 45 per cent still support independence. These trends may change but it shows that Greens like me, and others, might just be placed to help win more people over to the cause.

Our debate is vigorous, our divisions plain to see but it is our diversity that will be key to Scotland’s future.

PODCASTS: Access all of CommonSpace’s podcasts on Soundcloud here