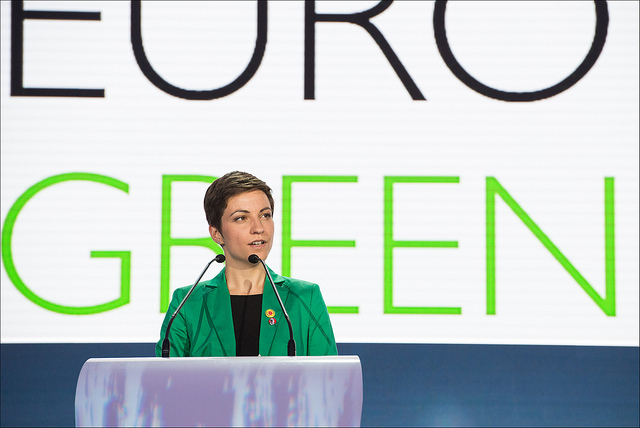 Guy Ingerson, co-convenor of the Aberdeen Greens, explains why he will be arguing for two conditions to be placed on any Scottish Greens support for a UK People’s Vote at their party conference this weekend.

ON 23 JUNE 2016 I waivered for a moment as I entered the polling booth. Would my vote make a difference? Was I condoning the treatment of the Greek people? Could TTIP spell the end of the NHS that saved my sight?

Then I thought about all the people leading this campaign. What was their angle? Did they care about Greeks being made homeless or about the NHS being privatised bit by bit? Did. They. Hell. It became clear to me that my vote did matter, it always matters. I voted to Remain in the European Union.

Since that day we have seen a multitude of egos raise their heads like the tentacles of a kraken. Captain May is on the deck of the HMS Brexit Britain still looking for her white haired whale. Boris however has left the planet. The Conservative and Unionist Party has become a parody of itself and all because Mr Cameron thought he could replicate ‘his’ win in the Scottish independence referendum of 2014. You’d think the opposition would be riding high in the polls right now but instead we have stalemate and gridlock.

In part this is because of the bonkers First Past The Post electoral system but it is also because Labour has no clear line on Brexit themselves. We heard a “jobs first Brexit” would be their goal… a sad clown of a phrase if ever there was one. Haven’t they heard that Aberdeen will be the hardest hit part of Scotland from Brexit? Possibly not but how would jobs be saved? (Aberdeen has been lost in a Labour Party committee for over a year now though as they delay dealing with their suspended Conservative supporting councillors.)

Then there is the “six tests” on which Labour will judge any Brexit deal. These are so crucial to them that the Scottish Labour leader, Leonard the Lost, couldn’t remember them when asked. Lastly of course there was the Brexit deal referendum motion voted for at their conference in Liverpool. It was as clear as mud and as binding on their leadership as a Gove & Boris friendship ring. If the Conservatives are a parody then Labour is a pantomime.

The clearest voices in all of this have been the Green Party of England & Wales, Liberal Democrats and now more recently the Scottish National Party. Of course the Lib Dems are clear that second referendums only apply to causes that meet their approval. Perhaps they now regret empowering the Conservatives and see a ‘Peoples Vote’ as a form of religious penitence? After Tim Farron, perhaps not.

I’m sympathetic to my sister party in England & Wales, but then I’m biased. They are sincere in their belief that another referendum would offer the choice that was unavailable in 2016: What kind of Brexit do the people of the UK want if at all? However they fail to consider the unique political circumstances we in Scotland face, let alone other factors such as which questions would be on the ballot? What precedent would this set for territories seeking to leave the archaic grip of Westminster? And crucially, what happens if the result is the same as it was two years ago? So far we have no answers to any of this.

That is why I was shocked to see Nicola Sturgeon announce to the press that her party would back calls for such a Vote. Where were her answers to the questions Scotland faces if such a vote took place? Where were her guarantees that Scotland’s voice wouldn’t be ignored yet again? There was none.

As it stands a ‘Peoples Vote’ is looking increasingly unlikely and I can only assume Sturgeon knows this too. A general election however might be less than a year away. Was this an attempt to win back some lost voters? In any event, in my view, she seemed to have given up on the argument that the Scottish people are sovereign. The 62 per cent of us Scots that went to the polling stations now seem to count for very little. Those powers over Agriculture and the Environment that Westminster grabbed, powers that mean a lot to Greens like me, seem to have been brushed under the carpet for awhile.

By endorsing a second vote via press release Sturgeon not only bounced her members into voting for it the next day, she bounced Scotland into the position of our voice potentially being ignored yet again. I’m sure she and her supporters don’t see it this way but I do and I don’t think I’m alone.

The only way our voice won’t be ignored is if our nation attains the powers of independence. Only an independent Scotland can ensure we have a choice about our future role in Europe. That should be our People’s Vote, that should be our rallying cry in the run up to the 2021 Holyrood elections.

With this in mind I have tabled an amendment to a motion calling on the Scottish Greens to back a Brexit deal referendum at our party conference this Saturday. My amendment lays out two conditions for our backing any second EU vote. Number one is that the ability to call an independence referendum be permanently devolved and number two is that ratification referendums don’t become the new norm for territories that might wish to leave the orbit of the Westminster bubble.

Make no mistake that if these conditions aren’t met then we and others risk death by a thousand referendums. Politicians in London will do whatever they can to stop Scotland from being heard and Scottish Greens need to be clear that we won’t continue to let this happen. No blank cheques to the Brexiteers or to fellow Remainers. Only Scotland’s interests, Scotland’s democracy and Scotland’s ability to choose should be at the forefront of our minds during this process.

To my fellow Greens I ask you to back my amendment and if you aren’t a Green then join us, join our party and help me pass this motion at our conference in Glasgow this Saturday. If we are to solve the problems Europe and Scotland faces then we need a seat at the table, we need to be in the room.

Picture courtesy of The European Parliament