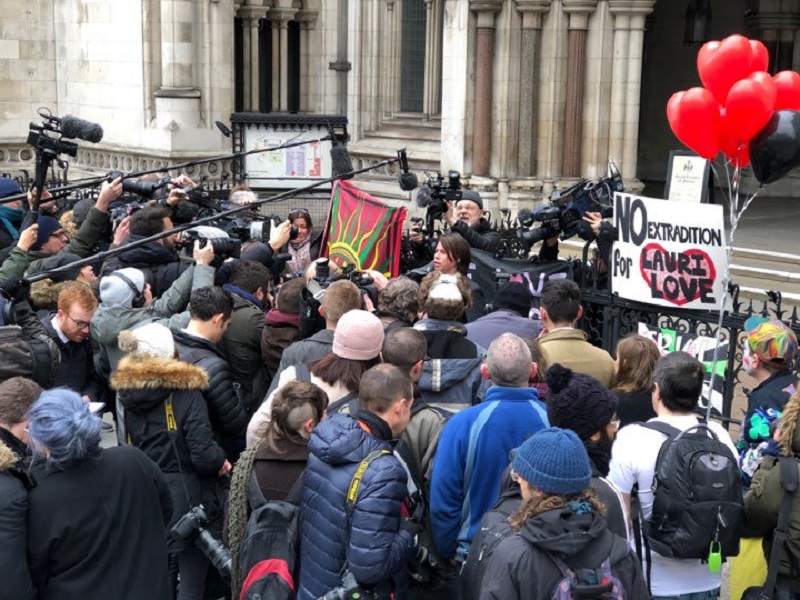 The 32-year-old accused of hacking into US Government websites will not be deported, the High Court has ruled

LAURI LOVE has won a court battle against extradition to the US after his arrest by the FBI in 2013 for allegedly hacking into US Government websites such as the FBI and Nasa.

Lawyers acting on behalf of Love, who has Asperger’s and severe depression, argued that he could be fairly tried in the UK and would be at risk of killing himself if deported to the US.

Appearing on BBC Radio 4 on Monday morning ahead of the hearing, Love’s father, the Reverend Alexander Love, a chaplain, said that he was quietly confident that the UK justice system would come to the correct conclusion for Love, who he claimed could not cope with the trauma of deportation.

Love has been supported by the Courage Foundation, which also supported Chelsea Manning, the former US Army soldier recently released from prison after being convicted in 2013 of leaking 750,000 classified or highly secret documents.

“I would say my prospects of due process in America are essentially zero.” Lauri Love

Information activists have claimed that Love could never have received a fair trial in the US, citing the previous treatment of hackers who had released information in order to expose secret government activity hidden from public view.

Analysis by the Guardian in 2013 listed several of the revelations from the material Chelsea Manning released, including a video showing a military helicopter crew laughing as they launched a rocket that killed a dozen people in Baghdad in July 2007, including a photographer and driver working for the Reuters news agency.

In 2015, Love told the BBC he thought his chances of a fair trial were “zero”: “I would say my prospects of due process in America are essentially zero, and the prospect of extradition is tantamount to a punishment worse than any punishment from the UK justice system.”

Love has never argued for immunity from prosecution, instead insisting that he should be tried in the UK where his crimes were committed.

Handing down the judgement, Lord Chief Justice Lord Burnett and Mr Justice Ouseley said it would “not be oppressive” for Love to be tried in the UK and said prosecutors from the Crown Prosecution Service should work with US authorities to try Love in the UK courts.

The judgement was also welcomed on Twitter by Wikileaks founder Julian Assange.

Full judgment in successful @LauriLove High Court case today. Extradition to US would be oppressive. https://t.co/oDZzxzakvp

Courage’s Case Director Naomi Colvin responded to the extradition ruling: “This is the result Lauri and his family have spent four years waiting for. This ruling is a massive victory for free expression online, for the fair treatment of neurodiverse people and for those of us who have drawn attention to the dire treatment of hackers and information activists in the United States.

“This ruling will be taken as a comment on the growing international isolation of the US under the Trump administration, and rightly so.

“As we demonstrated at appeal, Lauri was only ever in this position because he had been marked out for unfair, discriminatory and vindictive treatment. With any luck, today’s ruling will mean that prosecuting authorities finally start respecting the clear will of the British public: we do not extradite our geeks to face medieval punishment in the United States.”

The Crown Prosecution Service told Commonspace it was not committing to a course of action at this time: “We have received the High Court’s judgment on Lauri Love which we will now consider before making any further decisions.”

Picture courtesy of the Courage Foundation