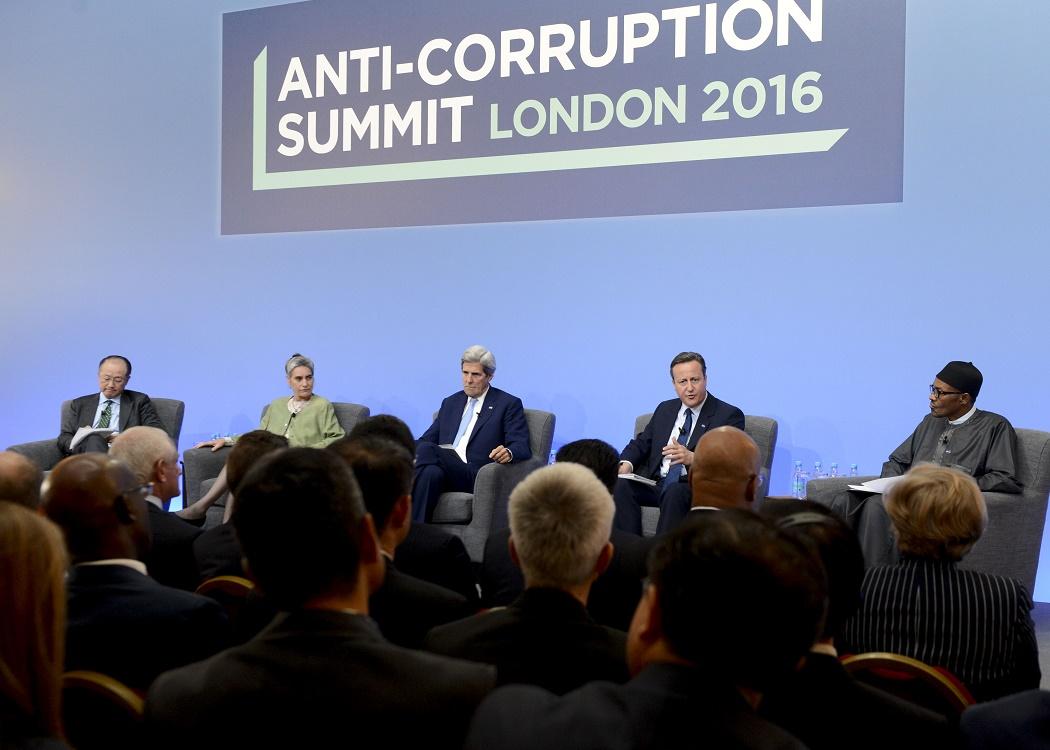 DAVID CAMERON is today chairing an anti-corruption summit to “step up global action to expose, punish and drive out corruption in all walks of life”.

Described by the government as “the first summit of its kind”, it includes world leaders, business and civil society and aims to “deal with issues including corporate secrecy, government transparency, the enforcement of international anti-corruption laws, and the strengthening of international institutions”.

The summit is taking place at Lancaster House in London, the same place where Prince William and the president of China recently admired an Aston Martin DB10 sports car, days before the London Metropolitan Police arrested and searched the homes of two Tibetan protesters and a Tiananmen Square survivor.

News coverage, so far, has been dominated by videos of the prime minister talking to the Queen and the Archbishop of Canterbury about the “fantastically corrupt” countries attending the summit, and the Queen herself insulting the behaviour of “rude” Chinese officials.

According to the NCA, “many hundreds of billions of pounds of international criminal money is almost certainly laundered through UK banks, including their subsidiaries, each year”.

The prime minister contrasts the “fantastic” corruption in Nigeria and Afghanistan with his own government, which is leading the way “tackling tax evasion and tax avoidance” and introducing “some of the world’s strictest legislation on bribery”. This reflects a common view of corruption as “something that happens in other, lesser countries” .

As David Whyte of Liverpool University puts it: “We have constructed corruption as something that is exclusively a problem in developing or economically ‘primitive’ societies, rather than our own.”

Those who are familiar with modern Britain – and London in particular – are increasingly challenging this view. In January 2015, the National Crime Agency’s (NCA) then director general, Keith Bristow, described London as “a global haven for criminal financial activity” .

According to the NCA , “many hundreds of billions of pounds of international criminal money is almost certainly laundered through UK banks, including their subsidiaries, each year”; Bristow’s estimate is PS24bn.

Putting it more mildly, Tory MP Nigel Mills said last week that our “status as a pre-eminent global financial centre and the unfortunate financial secrecy touted by our overseas territories and Crown dependencies make the UK seem a safe haven for the proceeds of corruption and the individuals and organisations that facilitate and benefit from financial crime and tax evasion”.

But if corruption does exist, how far does it go? On the one hand, despite the 4,835 UK addresses named in the Panama Papers , bribes and kick-backs are not a daily feature of British political life. On the other, a closer look at the city hosting this unique summit – “one of the world’s leading commercial and cultural capitals” in the words of its new mayor – suggests that corruption is far from marginal.

Mark Twain once reportedly said: “Buy land, they’re not making it anymore.” Or as Foxtons, a London estate agent whose windows were smashed by protestors in Brixton last year, puts it : “With an increasing number of people now disillusioned with pensions, more people are investing in property or becoming property developers.”

“The most popular location for registering a property company offshore, with 22,155 in the period” was the British Virgin Islands. We do not know the full details of all these companies. What we do know is that ” more than 75 per cent of corruption cases involving property investigated by the Metropolitan police’s proceeds of corruption unit involved anonymous companies registered in secrecy jurisdictions, 78 per cent of which were registered in the UK’s overseas territories or Crown dependencies”.

Through some forensic journalism and criminal investigations, we also know some of the people behind the property. They include “a former Kazakh secret police chief accused of murder, torture and money-laundering” with a “PS147m London property empire”; and “a former governor of Nigeria’s Delta State” who was jailed for 13 years in 2012 after pleading guilty at a court in London to money laundering and fraud offences involving up to PS150m from the Nigerian public purse.

The latter “allegedly bought four homes in Britain, including a PS2m mansion in Hampstead”.

While the stories of shady foreign investors are increasingly well-documented, less is known about that tiny square mile in Central London: The City. The Corporation of the City of London has “a special role and wide remit that goes beyond that of an ordinary local authority”, including an aim to “support and promote London as the world’s leading international financial and business centre and attract new business to the capital and the whole UK”.

The City consists of 25 electoral wards; its roughly 9,000 residents can vote in four , while in the remaining 21, votes are reserved for businesses. “The vast proportion of elections in the City have not been contested,” the now Shadow Chancellor John McDonnell wrote in 2012 . “Instead an old boys’ network amongst the companies sorts out which favoured son is to be bestowed the seat.”

The Bureau of Investigative Journalism has also revealed that Corporation spends just over PS10m on political lobbying, while the ‘City Remembrancer’, created in 1571 to “gather together and keape all the Bookes of the Cittye”, is given “daily, un-monitored access to the very highest levels of the British legislature” without any independent oversight.

Beyond the Corporation itself, the financial sector more broadly has deeply embedded itself a few miles down the Thames, in Westminster. Indeed, ” the UK comes second only to Switzerland for the number of people moving through the ‘revolving door’ between the finance sector and officialdom”; and in 2011 “hedge funds, financiers and private equity made up over a quarter of Conservative party funding, with the City as a whole contributing more than half of its donated income.”

Does this constitute corruption? It is, of course, legal. But it is also legal for peers living within walking distance of the House of Lords to ” claim up to PS300 a day just to turn up”, and for “peers who have said almost nothing during House of Lords’ debates” to receive more than PS1.6m in allowances and travel expenses over five years.

No law was broken when, in 2012, 142 peers with interests in private health companies voted on a Health and Social Care bill opening up the NHS to more private sector involvement.

Much of this obviously does not meet David Cameron’s definition of “fantastically corrupt”, but if he really does want to shine a light on corruption, London may be a good place to start.