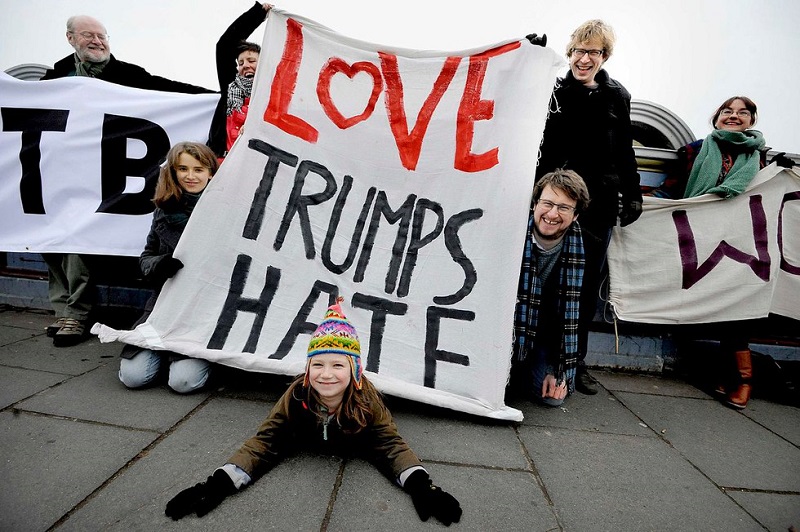 Patrick Harvie and Richard Leonard joined a meeting of trade unions and civil society groups to plan opposition to Trump.

THE LEADERS of Scottish Labour and the Scottish Green party joined the founding meeting of the Scotland United Against Trump group, a coalition set up to oppose any visit to Scotland by Donald Trump.

Held at the Unite union headquarters in Glasgow, Harvie and Leonard were joined by union officials from Unite, Unison, the CWU, and the GMB.

As well as trade unions and politicians, a number of community organisations such as the Muslim Council of Scotland and Stand Up to Racism were also present at the meeting.

Donald Trump said in an interview with the broadcaster Piers Morgan that he loved the UK and that he was “very popular there”.

Read more: Trump interview: “I love the UK, and I’m very popular there”

Trump has frequently spoken of his love of Scotland, saying one problem with being president was his inability to visit his golf courses Menie and Trump Turnberry in Scotland.

Speaking after the meeting, Unite’s Scottish Secretary Pat Rafferty said: “Unite are pleased to have hosted this inaugural meeting. Of course, this is early stages as we don’t know if President Trump will visit the UK and, if he does, whether he will reach Scotland in his travels.

“We are confident we can build an opposition coalition to Donald Trump so that he’ll know that should his feet touch the ground here he’ll know he isn’t welcome.”

The group said that although they recognise there is no official confirmation of a Scottish visit by Trump, they were united in the desire to build a coalition of opposition to ensure there could be the mobilisation of a massive protest against any such visit, should it take place.

Richard Leonard, also speaking after the meeting, said he was delighted to be part of the coalition. Patrick Harvie could not be reached for comment at the time of publication.