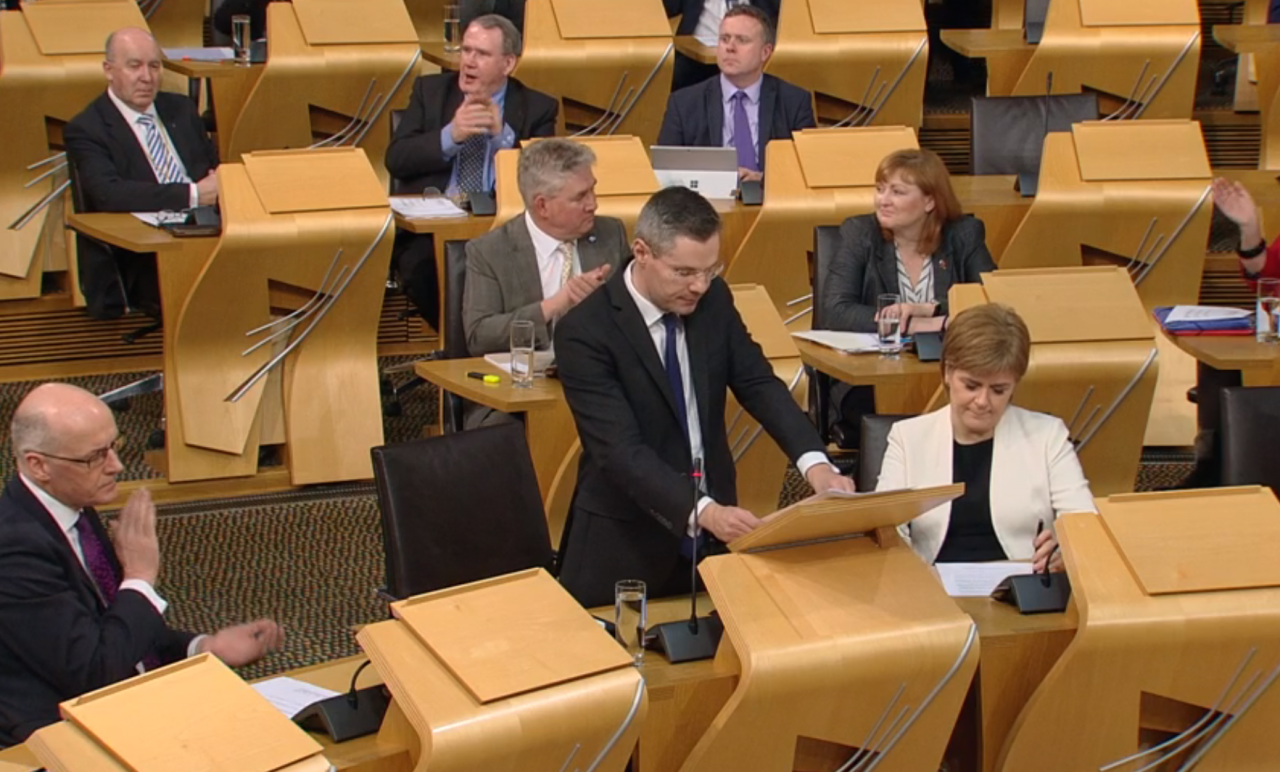 THE SCOTTISH BUDGET DEAL for the year ahead will include a freeze on the threshold for paying the higher rate of income tax after lengthy talks between the Scottish Greens and the SNP.

The threshold – the level of £40,000 above which taxpayer contribute 40 per cent income tax – was due to rise in line with inflation, where is predicted to be higher than expected following the Brexit vote.

The change is expected to raise around £30m extra in revenue, a small portion of the overall budget, but hotly contested by the five major parties in the parliament.

Derek MacKay said he had also identified an extra £100m resource spending and £30m in capital spending to reduce the hit of Tory austerity on the Scottish Parliament block grant.

The SNP-Green deal was scoffed at by Labour and the Tories – who accused their colleagues of selling out on their election promises.

“Taxation has been the area on which we have found it hardest to reach agreement and I accept that we remain some distance apart. However following our discussions, I propose that the Scottish Government will lodge a Scottish Rate Resolution that will freeze the higher rate threshold in cash terms relative to 2016/17.” Derek MacKay MSP

Kezia Dugdale said the SNP were “completely duplicitous”, and admitted it was cutting services during private Labour-SNP talks.

Dugdale also accused the Greens of selling out its voters for nationalism, and accepting continued cuts to national budget instead of raising taxes further through devolved powers.

“Let’s not kid ourselves – this isn’t the Greens’ responsibility to Parliament shining through,” she said. “It’s their responsibility they’ve put on themselves to do nothing which might jeopardise the prospect of another divisive independence referendum. Nationalism first. Austerity second.”

The Tory’s Murdo Fraser MSP said the SNP had embraces a “hard left, high tax” agenda of the Scottish Greens – but simultaneously called for extra spending, a claim Harvie described as a Tory “magic money tree”.

Harvie described the deal as “biggest budget compromise in the history of devolution in Scotland”. He added that Labour’s amendment was only a message “to what remains of their fan base how much they hate the SNP” and that his party achieved more in the budget than “Labour have in 10 years of opposition”.

The agreement from the Greens guarantees a government majority at all stages in parliament.

Correspondence between MacKay and Harvie was released on the details of the deal.

MayKay wrote: “Taxation has been the area on which we have found it hardest to reach agreement and I accept that we remain some distance apart. However following our discussions, I propose that the Scottish Government will lodge a Scottish Rate Resolution that will freeze the higher rate threshold in cash terms relative to 2016/17.

“While this will not result in an increase in the higher rate of tax, I estimate this will generate around £30 million of additional revenues. If the Scottish Rate Resolution is endorsed by the parliament this additional revenue will be allocated to local government providing a total additional investment of £160m.

“Reaching agreement requires compromise on both sides and I offer these proposals on the understanding that they will secure the support of the Scottish Green Party at Stages 1,2 and 3 of the budget and for the Local Government Finance Order and will enable you to allow the Scottish Rate Resolution proposed by this government to come into force.
I am grateful for the way in which you and your party have engaged in this process and I welcome your confirmation of this agreement.”

Harvie’s response said that the party’s remained far apart on issues of taxation, however he said MaKay’s “provision of the additional £160m will make a significant difference in protecting services in every community in Scotland.”

He added: “Your decision to abandon your proposed inflation-based increase to the higher rate threshold, which would have resulted in a small tax cut for high earners, represents the most modest adjustment possible in your tax plans. Maintaining the higher rate threshold at £43,000 and refusing even to consider a 1p increase to the higher rate itself, does not match our ambitions. Its effect is to maintain the status quo, and we are convinced that this position cannot be sustained throughout the current parliament.

“Given the central importance of protecting local services, on balance we are able to confirm that the changes you have offered are sufficient to allow us to support the Budget Bill at stage 1.”