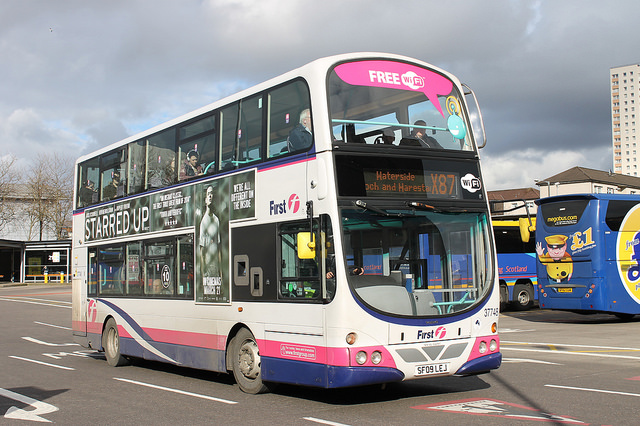 FRIENDS OF THE EARTH (FOE) Scotland, in partnership with Get Glasgow Moving, Unison Scotland and Unite Scotland are calling for supporters to respond to a Scottish Government consultation on bus service reform, in order to shift the balance of power away from private companies and towards public bodies.

The consultation, which closes on Tuesday 5 December, considers ways to improve the legal framework which governs bus services to deal with “significant challenges” facing the sector.

Campaigners say that re-regulating bus services and putting them under public ownership – as is the case with Lothian buses – would help to address high costs and inefficient and unequal service provision. The campaign notes that bus companies have cut routes by a fifth and increased fares by 50 per cent.

By extension, they suggest that this would support reductions in air pollution by encouraging greater use of public transport.

Environmental campaign organisation Friends of the Earth Scotland is hosting the joint email campaign in response to the Scottish Government’s consultation, through which over 1000 emails have been sent so far.

Emilia Hanna, air pollution campaigner for FoE Scotland commented: “The bus sector is in a shocking state and needs a shake up, because buses play such a vital role in tackling air pollution, climate change, and transport poverty.

“People are being forced into car ownership across Scotland because the buses simply do not serve their area or are unreliable.

“With the right type of regulation and support, our bus networks can be expanded and fleets modernised, enabling those of us who either don’t have access to a car or want to make an environmentally friendly choice to leave it at home.”

Get Glasgow Moving, which has teamed up with FoE Scotland the other partner organisations in calling for responses to the consultation, is a campaign for a publicly owned, fully integrated and accessible transport network in Glasgow.

Ellie Harrison of Get Glasgow Moving said in response to the consultation: “We absolutely want a newly enhanced ‘Transport for Glasgow’ to be granted the powers necessary to run its own bus company, a new ‘Strathclyde Buses’.

“Glasgow must be given the support necessary to set up a bus company like Edinburgh’s successful and popular Lothian Buses, which is part-owned by Glasgow city council and the surrounding councils which presently make up SPT and, most importantly, constituted so that all its profits are reinvested in expanding the region’s public transport network, improving reliability and reducing fares.”

“Emissions from transport are the single biggest sector in terms of climate change, barely dropping in the past 20 years.”

Get Glasgow Moving has gathered over 3,600 signatures in support of its campaign.

The Get Glasgow Moving website further explains the issue: “Glasgow is being held to ransom by private bus companies. 45 per cent of their income comes from public subsidies, yet they continue to cut vital services and hike up fares.

“While profits go to shareholders, the average age of a bus in Glasgow is over 10 years, belching out poisonous diesel fumes onto the most polluted streets in Scotland.”

Unite Scotland, which is also backing the call for public ownership, has put forward its own petition on the issue to the Scottish Parliament Public Petitions Committee.