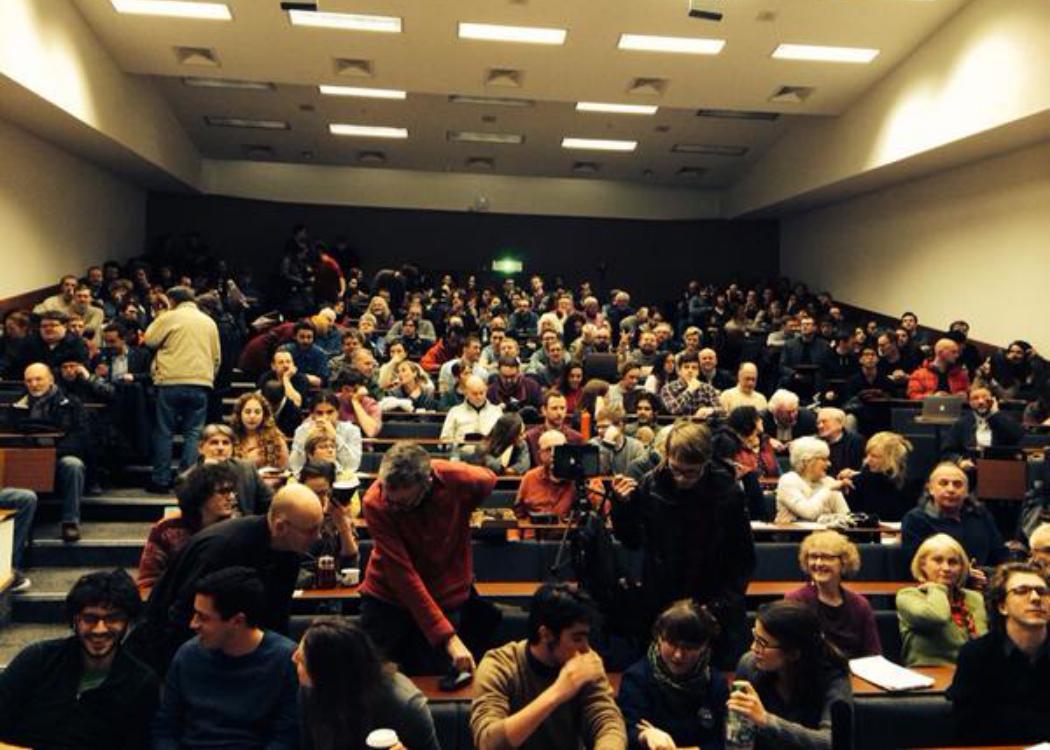 In the wake of the Syriza victory in Greece – the first anti-austerity party to be elected in the EU – Common Weal organised a #CommonDebate chaired by Peter McColl, Director of the Common Weal Policy Unit and Rector of the University of Edinburgh, to discuss what this means for the future of politics in Europe and Scotland.

The panel consisted of Cat Boyd, Trade Unionist and co-founder of the Radical Independence Campaign; Dr Myrto Tsakatika of Syriza Scotland and senior lecturer in politics at the University of Glasgow; Professor Michael Keating, author and political science professor at the University of Aberdeen, specialising in European politics; and Gordon Maloney, President of NUS Scotland.

And as the lecture theatre in Edinburgh packed out amid the snowstorm raging outside, those at the event and thos watching from home on the Independence Live stream took to Twitter.

The importance of connecting to international movements was acknowledged.

Thanks for excellent #commondebate tonight in Edinburgh about Syriza & lessons for Scotland. Good to know were part of something much bigger

Especially on the scale of changing austerity politics in favour of a radical, socialist alternative.

We can’t do is socialism in one country. Invasions, embargoes. EU is the smallest scale at which radical change is possible #CommonDebate

Dr Tsakatika pointed out the different ways Syriza diverged from the previous government.

Dr Tsakatika: Syriza are 1st Greek government not to be sworn in by the church. This is a symbolic move toward a secular state #CommonDebate

Dr Tsakatika: The greatest success of Syriza was uniting so many diverse groups into an effective coalition. #CommonDebate

But others were wary of the idea of a coalition after the disaster of the ConDems.

The thorny question of awkward coalitions is broached at the #commondebate. Worked out for the lib Dems right?

Some people noted the abundance of head nodding going on in the room.

There was some #labourbashing and calls for a new sort of politics.

We do need socialism. What does that mean? Industry run by Edinburgh civil servants? That would be awful. Labourism failed. #CommonDebate

But others also pointed out the futility of such #murphybashing.

Audience members were interested in hearing how Common Weal could provide a space for non-party politics.

Some tweeters were quick to point out the classic case of the socialist ‘asks question’.

‘Question’ always means something different in the socialist dictionary… #CommonDebate

And others questioned the viability of the panellists’ proposals.

Let’s “deepen democracy”, federalise the economy, and nationalise the TV – like this is gonna work in today’s world… #commondebate

Cat Boyd maintained that the people know that austerity is not the answer.

.@kittycatboyd: Like in Scotland the old order warned of economic catastrophe, but voters knew catastrophe was the status quo. #CommonDebate

And Keating underlined the irrationality of cuts.

Michael Keating: Austerity is expensive because you can’t cut your way out of a recession. It cuts demand & that’s a failure. #CommonDebate

There was much satisfaction with the austerity smashing.

Speakers always returned to Scotland, and how we can be inspired by Syriza’s win and make change here.

“This beautiful capital city of Edinburgh is known as the Athens of the North. Let’s make that really happen” @kittycatboyd #commondebate

And the snow outside was not forgotten.

Great #CommonDebate 2nite on Syriza – when I said about Athens of the North, I meant make it for our politics- but maybe weather also! #snow