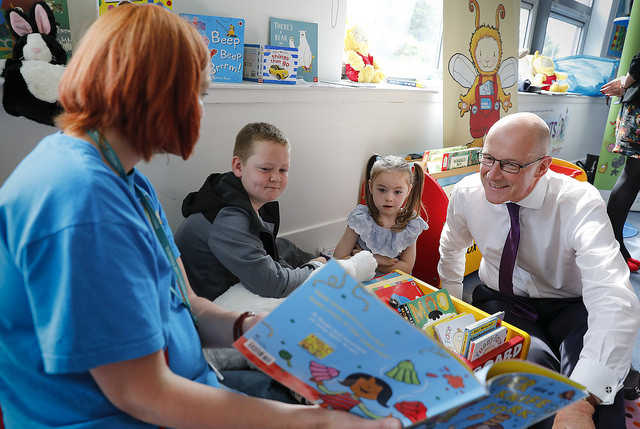 Hilary Long, coordinator of the Upstart Glasgow network and CommonSpace columnist, says the answer to addressing the educational attainment gap is found outside of the school gates – the Scottish Government should forget testing P1’s and focus on tackling poverty

IT HAS certainly been an interesting few weeks in relation to the political storm that has been brewing around the Scottish Government’s implementation of standardised tests for children in Primary 1. At First Minister’s questions Nicola Sturgeon reminded the Tories of their manifesto and support for standardised testing and then she went on to challenge Willie Rennie who raised the spectre of a defeat for the government this week on the issue. A Scottish Conservative motion is set to be heard on Wednesday.

In my capacity as a Trustee of Upstart I have been campaigning against the tests for a number of reasons. I do not believe testing will deal with the attainment gap. I do think tests will impact on the play pedagogy being implemented in many early years classrooms in primary schools across Scotland. I do think tests will narrow the curriculum with an increased emphasis on literacy and numeracy at a very early age. I fear that teachers will be obliged to teach to the test. It will inevitably create league tables. Test data will be unreliable and will not tell teachers anything that they do not already know about a child. For many children the experience of being tested will be distressing.

It is poverty that robs children of educational opportunities. Almost one in four children in Scotland are living in poverty (230,000). 64 per cent of these children live in a household where one adult works.

On Thursday [13 September] I attended a seminar in Glasgow organised by Children’s University Scotland in collaboration with Children in Scotland called “Opening the school gates: building a culture of learning to tackle the attainment gap”. Dr Janet Goodall from the University of Bath said in her contribution that 80 per cent of the difference in how well children do at school happens outside the school gates. Factors outside the school gates can often have the greatest bearing on children’s educational outcomes. The attainment gap is driven by how poverty and disadvantage impacts on the home, school and community, creating barriers to learning that directly affect children’s ability to succeed at school and in life.

The growing scale of poverty in Scotland and the detrimental effect on all aspects of children’s lives is widely recognised, but efforts to close the educational attainment gap have failed.

The Bank of Scotland recently conducted research on property prices in Scotland around the top 20 secondary schools. Property prices reached an average of £277,134. Buyers were paying 36 per cent more than if they were buying a property elsewhere in the same local authority area – with this amounting to a difference of £72,973. That premium rises to more than £120,000 in the catchment area for the four top schools.

So parents are paying a huge premium to get their children into a good school and to live in an area that seems like a pleasant place to live and bring up children. Many do it at the primary school stage to ensure entry to the feeder secondary. I’m not criticising parents for doing what they think is in the best interests of their children. We all as parents do that. However, Scottish education remains highly inequitable.

Testing will do nothing to ensure a great education is available to all, and not just for those who can afford good catchment areas. This is the price of successive government’s failure to tackle disadvantage effectively.  Under achievement represents a huge waste of talent and poverty is very costly to the economy and to society as a whole. Inevitably poor children and their families are paying the “real” price for that.

It is time to ditch the party politics and as a civilised Scottish society put the interests of children and young people first and foremost. As we move towards starting a new country this has to be an imperative.