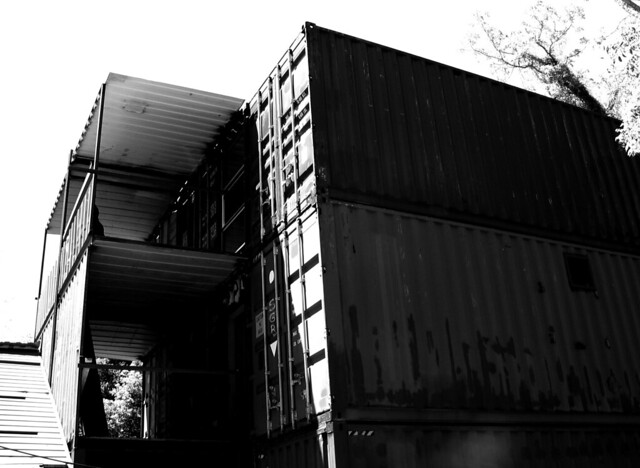 SQUEEZED in after Boris Johnson’s fantasies about a renegotiated Brexit deal as he gallivants around Europe, a news item about a new report on homeless children caught my attention.

The report, Bleak Houses, by the Children’s Commissioner for England, estimates that there could be over 210,000 children without a permanent home. Temporary accommodation in shipping containers that are frequently not fit to live in are providing a “solution” to this problem. But this type of accommodation is not an interim arrangement – it provides housing for years whilst families wait for an offer of a permanent place to live.

The report says that 124,000 children are classed as officially homeless and living in temporary accommodation in England, plus around 90,000 in “sofa-surfing” families (although it is believed that the figures are much higher than this).

It is hard to imagine living in a metal box, some measuring as little as 18 square metres, as an individual never mind an entire family with parents and children sleeping in a single room that is also used as the kitchen. Scorching hot in summer and freezing cold in winter, families reported that the units were prone to damp, mould and rat and mice infestations. Some parents were concerned about anti-social behaviour in the surrounding areas, forcing them to keep their children inside for most of the time.

Office blocks and warehouses are also being used as temporary accommodation. In Harlow, Essex 13 office blocks have been converted into more than 1,000 individual units.

“No child should be spending months if not years living in a converted shipping container, a dodgy old office block or an emergency B&B,” she said.

“We constantly hear from struggling families forced to accept unsuitable and sometimes downright dangerous accommodation because they have nowhere else to go. The devastating impact this has on a child’s development and wellbeing cannot be overstated”.

Already stressed and disadvantaged families are being moved away from what few local supports they have. Health visitors are unable to keep track of children who are often continually on the move. Health checks and developmental checks and vaccinations are missed. Education is disrupted as children change schools. Even getting registered with a GP surgery is problematic. Consequently, the physical, mental and emotional health and wellbeing of children is at serious risk. These descriptions of pokey, dangerous housing conditions sound like something out of Dickens rather than a picture of life for many families in 21st century Britain. One occupant said there were inadequate cooking and washing facilities and she bathed her child in the sink.

Harlow, Essex receives families from London Boroughs. It’s been referred to as “social cleansing”. Croydon based property group Caridon has made £100 million converting and letting “rabbit hutch” flats in unused office blocks without planning permission. They are located in industrial areas with little access to public transport, schools, health services and shops. One such property called Terminus House is located on top of a multi-storey car park.

One resident of the car park said: “My bed is in my living area…my son’s bed is in my kitchen area and my daughter’s cot is in the living area”. She had to remove her son from nursery because it was too far away.

Harlow Civic Society said: “There are no facilities nearby that are essential for civilised family life”.

The children who live here are referred to as ‘office block kids’. One mother of four children under 8 years of age was paying £80 a week travel expenses to get the children to school. She said her children were unable to sleep because of the noise and there was no space for them to do their homework. Because of a lack of laundry facilities children are often bullied at school for being dirty and teachers report washing clothes and providing food. Going out to play is impossible due to traffic dangers as well as very poor air quality and there is no space for children to play indoors either.

And nearer to home in Edinburgh, 21,000 children are living in poverty. A primary school teacher spoke to the council’s education committee about children in her school who appeared dirty and hungry. The school has established an in-school food bank. She said that the children find coping in class very challenging and many are experiencing emotional trauma that impacts on learning and behaviour. Recent evictions in her school affected 16 children with four families being moved out of the school catchment area which meant moving to new schools.

A one bedroom shopping container costs £35,000. Dealing with the inevitable consequences for a generation of children in terms of their physical, mental, emotional health and wellbeing and their education will be incalculable, and that’s to say nothing of the day to day, relentless struggles facing families who are forced to live like this. And they are not all workless and addicts with criminal backgrounds, as some of our politicians would like us to believe. Many have an adult in employment but living in Britain with its low wages, precarious employment, sky high rents and a callous welfare state means that no matter how hard you work you can’t make ends meet.

Nelson Mandela deserves to have the final words: “There can be no keener revelation of a society’s soul than the way in which it treats its children”.