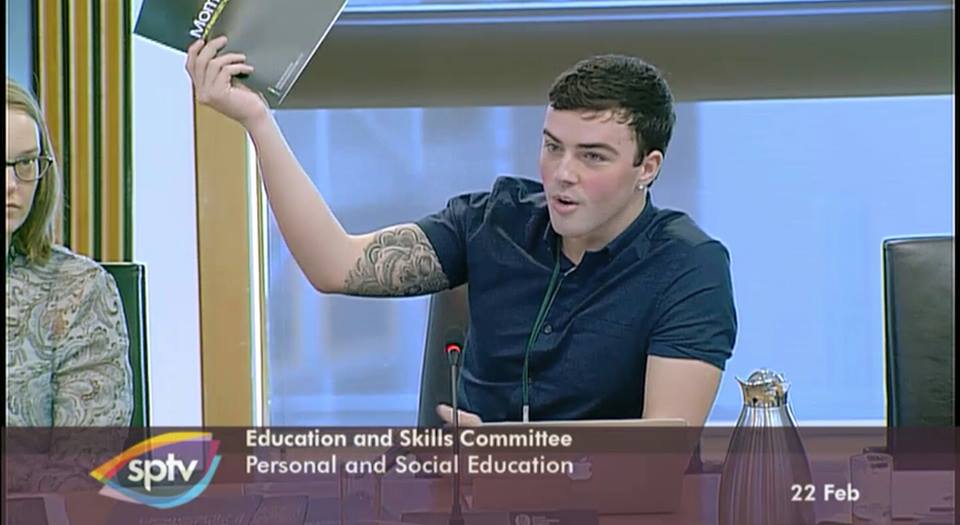 A MAJORITY of MSPs have backed proposals to provide an education that teaches pupils about the range of sexualities and gender identities in society, making it the first among European parliaments to support such a scheme.

Sixty six MSPs have backed the programme of the Time for Inclusive Education (Tie) campaign, the culmination of their two year fight to win broad public and political support for school level education to tackle the abuse and isolation of LGBT+ youth.

For months the campaigners have been calling on MSPs to back a five point pledge calling for legislation to require schools to implement inclusive education, deal more robustly with instances of homophobic abuse and bullying.

“It is important to recognise that this parliamentary mandate for our calls is a historical moment in the push for equal rights in Scotland. We now look forward to working with MSPs to ensure that the strategy outlined in our pledge is realised, as it is time to end the legacy of Section 28 – once and for all.”

The campaign’s demands are still under consideration in the Scottish parliament’s equality and human rights and education and skills committees. Campaigners hope the parliamentary majority will speed parliamentary process to new legislation.

A landslide of MSPs have backed the campaigns demands since it led an historic LGBT+ Pride procession through Glasgow in 2016. Pressure has increased across Scotland’s parties, including in the ruling SNP, whose leader, First Minister Nicola Sturgeon, has repeatedly prasied the work of the Tie campaign.

Christina McKelvie, MSP for Hamilton, Larkhall and Stonehouse said: “The Scottish Parliament has made herself clear – we support the Tie campaign. We support inclusive education in our schools; we support training and guidance for our teachers; and we support, unequivocally, our young LGBTI pupils who have had the courage to speak out and work with Tie.”

“The Scottish Parliament has made herself clear – we support the Tie campaign. We support inclusive education in our schools; we support training and guidance for our teachers; and we support, unequivocally, our young LGBTI pupils who have had the courage to speak out and work with Tie.” Christina McKelvie MSP

“It’s been an immense privilege to work with the campaign to get to this stage but we all know that there is still more work to be done. I’m glad that across all political divisions, those who have signed the pledge acknowledge that we all must work together to create that safe, secure and tolerant country for our LGBTI young people.”

The Tie campaign has proved a model of activist success. It emerged from the 2014 Scottish Independence referendum and has reshaped the debate about LGBT+ rights in Scotland’s new political era.

The pledge has also be signed up to by 11 MPs and two peers in the House of Lords.

Polling conducted by Tie found that 90 per cent of LGBT+ people have faced persecution at school, and 27 per cent have attempted suicide as a result of bullying.

Legislation: New legislation in the lifetime of this current parliamentary term, which outlines a requirement for all schools to be proactive in tackling homophobia, biphobia and transphobia through an inclusive educational approach. Legislation should act to benchmark the three major components of LGBTI inclusive education: inclusion, training and monitoring.

Teacher training: The delivery of a teacher training programme which is free at the point of access and focuses specifically on LGBTI issues, for teachers who are currently serving and student trainee teachers (via Initial Teacher Education).

Curricular inclusion: LGBTI inclusion in individual subject areas, achieved via approved curriculum mapping guidance as well as mandated LGBTI inclusive Relationships, Sexual Health and Parenthood (RSHP) education. Such materials should be accessible for all schools, with a clear requirement of uptake.

Recording of bullying: All local authorities should record specific incidents of homophobic, biphobic and transphobic bullying in schools – in accordance with existing guidance and expectations for the recording of bullying concerning other protected characteristics, such as race.

Monitoring: Monitor any steps that are taken with regards to LGBTI inclusivity in schools.  This should include the collection of data at local authority level, as well as the addition of a specific LGBTI indicator in the Education Scotland school inspections process, in line with HGIOS4.