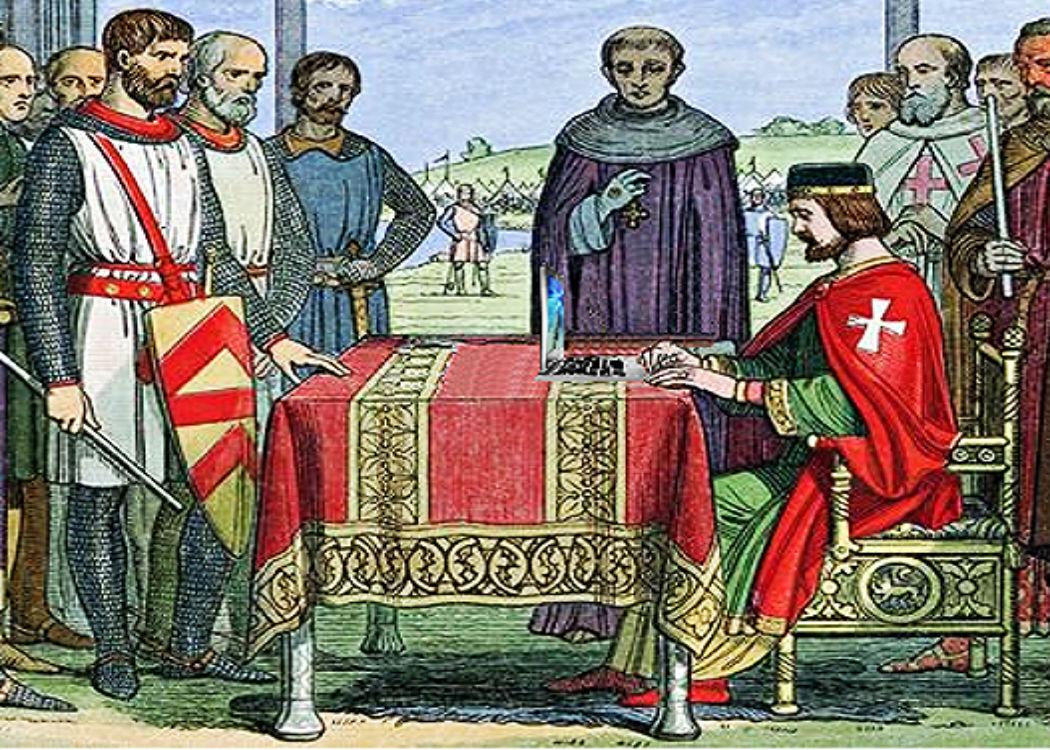 THE great English author George Orwell said “history is written by the winners”, and the Magna Carta, of which today is its 800th anniversary, could be no greater evidence of that.

The text was written by barons in rebellion against King John, who had to reluctantly sign up to the document on 15 June 1215 “at the point of a sword”.

The barons had taken London and King John – who was known as a regressive tyrant not a forward thinking liberal – was held to ransom with little option but to give it decree. The Magna Carta was repudiated by Pope Innocent III within weeks, and once King John had regained power he renounced it.

Historians have recently discovered that the Magna Carta would have been long gone from history if the royal family had its way. Contrary to the popular theory that the text was preserved by royal scribes, the historians discovered that church scribes were responsible for its publication and preservation.

However, despite all of this historic evidence of the royal family’s role in the Magna Carta, celebration of the historic text will be led by the person who runs directly in King John’s lineage – the Queen. She will be joined by thousands at Runnymede, near Windsor, Berkshire, where King John signed the text, to commemorate it. There is unlikely to be little talk of the text’s radical history.

“But here in Britain, ironically, the place where those ideas were first set out, the good name of ‘human rights’ has sometimes become distorted and devalued.” David Cameron

David Cameron will use his speech to push his own version of what the Magna Carta means in the modern British context.

With plans to scrap the Human Rights Act and take Britain out of the European Convention of Human Rights, the Magna Carta would not appear like an obvious jumping off point. But the Prime Minister can make it so.

He’ll say: “For centuries, it [Magna Carta] has been quoted to help promote human rights and alleviate suffering all around the world.

“But here in Britain, ironically, the place where those ideas were first set out, the good name of ‘human rights’ has sometimes become distorted and devalued.

“It falls to us in this generation to restore the reputation of those rights – and their critical underpinning of our legal system.”

While Cameron and the Queen naturally look at the Magna Carta – latin for ‘great charter’ – through the eyes of established rulers who want to preserve their power, for much of the past 800 years the Magna Carta was utilised by those, like the barons in 1215, who were in rebellion or forging a new state.

“To no one will we sell, to no one deny or delay right or justice.” Magna Carta

While much of the text refers to aristocratic rights as part of the barons demands, the Magna Carta also contains within it general universal principles of human rights and liberty that are still relevant and utilised across the world today. Part of the reason for these general principles being included in the text was the role of peasants in backing the barons over the King at the time the text was decreed.

Two clauses stand out as being of key relevance:

– “No free man shall be seized or imprisoned, or stripped of his rights or possessions, or outlawed or exiled, or deprived of his standing in any other way, nor will we proceed with force against him, or send others to do so, except by the lawful judgment of his equals or by the law of the land.”

– “To no one will we sell, to no one deny or delay right or justice.”

The Magna Carta is seen to have been the ancestor of ‘habeus corpus’, the principle, introduced into law in 1679 in England, that no person should be imprisoned unlawfully.

In 2008, the late Tony Benn said the UK Government’s extension of detention without trial from 28 to 42 days was “the day Magna Carta was repealed”.

The US constitution was heavily influenced by the Magna Carta, and it was Americans who were the first to erect a monument to the Magna Carta, with the American Bar Association’s stone monument at Runnymede erected in 1957.

However, as with all historic texts, it can be de-contextualised in order to suit particular interests – during the slave era, lines of the Magna Carta were read out by slave owners in justifying their actions.

Note the use of ‘English’ here – the Magna Carta never applied to Scotland, with Scotland’s legal system developing separately

Historian James Holt has written that it is a “reflexion of the continuous development of English law and administration” in English national life.

Note the use of ‘English’ here – the Magna Carta never applied to Scotland, with Scotland’s legal system developing separately.

In its original form, the Magna Carta read: “English law shall apply to holdings of land in England, Welsh law to those in Wales, and the law of the Marches to those in the Marches.”

The 1887 Criminal Procedure Scotland Act was the first time an equivalent of habeus corpus was introduced to Scotland.

The Magna Carta will be celebrated at the official commemorations in Runnymede as a historic text of national unity and national law, but the real history of the document and the subsequent battles over its legacy has been marked by division and conflict. In that fashion – between the rulers and the ruled – the debate over Magna Carta will continue forever more.