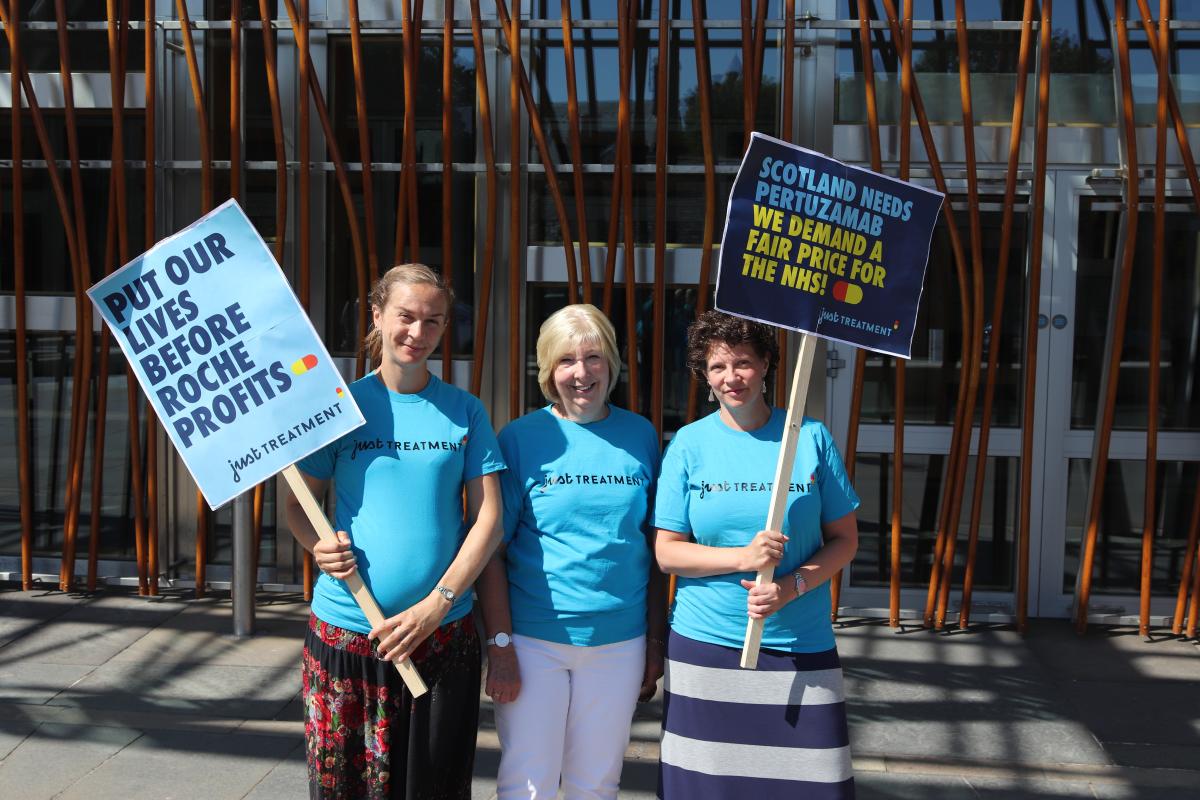 THE JUST Treatment campaign has gained over 5000 signatures on a petition asking the Scottish Government to use a Crown use licence to allow NHS access to pertuzumab, a breast cancer treatment.

The drug is currently produced only by pharmaceutical giant Roche, which charges over £40,000 per patient per year. As a result, the drug has repeatedly failed the Scottish Medicines Consortium’s (SMC) cost-effectiveness test and it has not been made available in Scotland.

Both the UK and Scottish Governments have the power to give another company the right to produce the drug at an affordable rate using a Crown use licence, which allows the government to challenge uncompetitive behaviour by pharmaceutical companies.

A discount deal secured with the body which approves medicines in the rest of the UK means the drug is now available on the NHS in England, Wales and Northern Ireland.

Dunise MacIver, a Scottish woman living in London, where she is being treated with pertuzumab, is campaigning for the drug to be provided at an affordable rate to the NHS in Scotland.

“I can’t go home to get treatment near my family and friends in Scotland because I would lose access to pertuzumab,” MacIver said.

“I could have benefited from pertuzumab as part of my treatment, but Roche chose to put their profits before my life.” Fiona Morrison, Just Treatment campaigner

“It is outrageous that Roche are holding patient’s lives to ransom like this. If they refuse to drop the price to allow a deal to be made with the Scottish Medicines Consortium then the government should pursue a Crown use licence.”

Roche is expected to submit an improved proposal to the SMC in the next few months, and campaigners say the proposal must be fair and affordable.

However, Fiona Morrison, a Just Treatment campaigner in Glasgow who has had breast cancer, said the Scottish Government should prepare for the worst so that it is ready to take action to ensure people in Scotland can gain access to the drug as soon as possible.

“I could have benefited from pertuzumab as part of my treatment for primary breast cancer, but Roche chose to put their profits before my life by pricing the drug out of the reach of NHS patients like me,” Morrison said.

“We hope this time they are offering a fair and affordable price to the NHS, but if they don’t that can’t be the end of the story. We want the Scottish Government to be ready to immediately issue a Crown use licence if the negotiations fail. Our lives should come before this corporation’s profits.”

Supported by social justice campaign organisation Global Justice Now Scotland, the campaign has gained over 5000 signatures on a petition to the Scottish Government, which was delivered to new health minister Clare Haughey late last week.

Liz Murray from Global Justice Now Scotland commented: “Pharmaceutical companies need to stop putting their huge profits before people’s lives. Around the world, governments are increasingly having to ration or turn down medicines because of high prices.

“Cancer drugs have become particularly expensive. But there are legal measures that our governments here at Holyrood and in Westminster can take to force pharmaceutical companies to lower their prices.

“Around the world, governments are increasingly having to ration or turn down medicines because of high prices.” Liz Murray, Global Justice Now

“The Crown use license is one of these measures. It is important that governments are willing to use these tools to ensure people’s right to access affordable medicines is guaranteed.”

On 31 May, Green MSP Alison Johnstone raised the issue in parliament where she asked the government to make use of the Crown use licence, but then health secretary Shona Robison dismissed the option, saying: “We do not consider that invoking that power would provide a quick solution to providing the medicine for patients in Scotland.

“An alternative manufacturer would have to go through a lengthy process of obtaining regulatory approval from either the European Medicines Agency or the Medicines and Healthcare products Regulatory Agency before it could make a submission to the Scottish Medicines Consortium.”

Robison said that Roche was in a continuing dialogue with NHS national procurement but that due to the government’s limited involved in this it was unable to offer a timescale for that process.

Responding to the presentation of the campaign’s petition, a Scottish Government spokesperson said:

A Scottish Government spokesperson said: “The newly appointed minister for mental health Clare Haughey met with the campaigners last week and discussed the campaign’s aim of securing access to pertuzumab.

“Our investment and reforms have significantly improved access to new medicines and treatments, including for cancer, in recent years. We are continuing these improvements and encourage pharmaceutical companies to offer products at a reasonable and transparent price so patients have access to the treatments they need.

“We welcome the confirmation offered by Roche in recent weeks that they will now re-submit pertuzumab to the Scottish Medicines Consortium.”