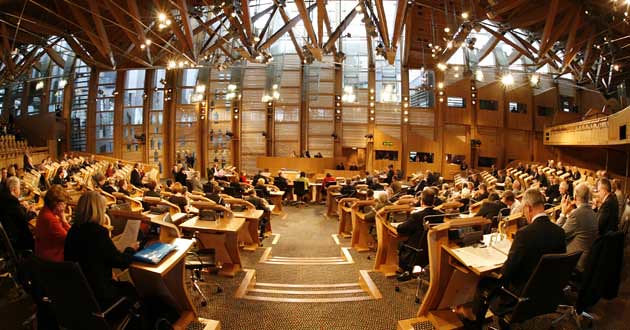 THE SCOTTISH PARLIAMENT is expected to be recalled from its October recess this week to vote on the UK Government’s Brexit deal.

Although Holyrood is not scheduled to sit until next week, it has now been widely reported that MSPs will return to the chamber on Thursday, where they are expected to rejected the deal agreed between Prime Minister Boris Johnson and EU leaders, which has formed the basis of the Withdrawal Agreement Bill.

Although Holyrood’s Presiding Officer Ken Macintosh is currently in Stockholm as part of a parliamentary delegation, a Scottish Government spokesperson has confirmed that Macintosh “has been in contact with officials throughout the day.”

The spokesperson said: “Any decision to recall Parliament will be taken by him. As ever, he will listen to the views of the parties before reaching a decision.”

Seems UKG will try to ram Withdrawal Agreement Bill through in days, ignoring requirement of @ScotParl (and @AssemblyWales) to consider Legislative Consent Motions. Recall would allow an opportunity, but outrageous that vital scrutiny expected to happen in such short timescale. https://t.co/0L7cBmwvPQ

Following the announcement that the Scottish Government would seek an early recall, First Minister Nicola Sturgeon wrote on Twitter: “Seems UKG will try to ram Withdrawal Agreement Bill through in days, ignoring requirement of @ScotParl (and @AssemblyWales) to consider Legislative Consent Motions. Recall would allow an opportunity, but outrageous that vital scrutiny expected to happen in such short timescale.”

The first minister’s statement would appear to confirm that MSPs will consider the Legislative Consent Motion, which the UK Government is required to seek from both the Scottish Government and the National Assembly of Wales, but which it can technically go forward without. However, such a course would make clear that the bill lacks the approval of the Scottish and Welsh legislatures.

Earlier today [21 October], joint-letters were sent by Sturgeon and the Welsh First Minister Mark Drakeford to Prime Minister Boris Johnson and the European Council President Donald Tusk urging them to allow more time for the Brexit bill to be scrutinised.

The letter to Johnson calls on the UK Government to secure an extension to Article 50, so that both Holyrood and the Welsh Assembly can carry out their “proper constitutional and democratic functions.”

“While clearly it is a matter for the Council to consider how long such an extension should be, we would favour one which is long enough to enable a referendum with remain on the ballot paper.” Joint-letter from First Minister Nicola Sturgeon and First Minister Mark Drakeford to European Council President Donald Tusk

The likelihood of such an extension was today given credence by Germany’s economic affairs minister Peter Altmaier, who said “it goes without saying” that a Brexit extension beyond the 31 October deadline would be granted in light of the possibility that the European parliament’s vote on the deal may also be delayed.

Altmaier said: “We have already twice agreed to an extension. I have repeatedly said as my own opinion I am not ideologically opposed to extending again a few days or a few weeks if you then get a good solution that excludes a hard Brexit.”

The Scottish and Welsh first ministers’ letter to the prime minister states: “This Bill will be among the most important pieces of legislation ever considered by the UK Parliament, the Scottish Parliament and National Assembly for Wales, with far-reaching implications for the whole of the United Kingdom and our future well-being.

“Both our governments believe the deal you have negotiated with the EU will be even more damaging to Wales, Scotland and the United Kingdom than the previous unacceptable agreement made by your predecessor.

“It is essential that your government respects devolution, the legislative consent process and any decisions on consent that the Scottish Parliament and National Assembly may reach.”

READ MORE: Nicola Sturgeon on new Brexit agreement: ‘Hard to imagine a deal that could be worse’ for Scotland

Both first ministers have also advocated an extension long enough for a further referendum to be held, with the option of remaining in the European Union on the ballot paper.

The letter to President Tusk states: “While clearly it is a matter for the Council to consider how long such an extension should be, we would favour one which is long enough to enable a referendum with remain on the ballot paper to be held in the UK. Both of our Governments and legislatures are in favour of such a referendum and of the UK remaining in the EU.”

Echoing Sturgeon’s statements, SNP Westminster leader Ian Blackford today warned that the Brexit bill must not be “railroaded” through Parliament, following Speaker John Bercow’s ruling that the UK Government could not attempt to bring forward another meaningful vote on the legislation after it was defeated over the weekend.

Blackford said: “SNP MPs will not support the UK Government’s programme motion which will attempt to bulldoze through Parliament the toxic Brexit Bill – without a shred of scrutiny and would give the Scottish Parliament and Welsh Assembly little more than a day to consider the bill.

“Boris Johnson must secure a meaningful extension to the Brexit deadline from the EU so that full scrutiny of the Withdrawal Agreement Bill can take place.

“The SNP is clear – we will oppose Johnson’s extreme plans to inflict lasting harm on Scotland’s economy, jobs and people’s livelihoods, every step of the way.”