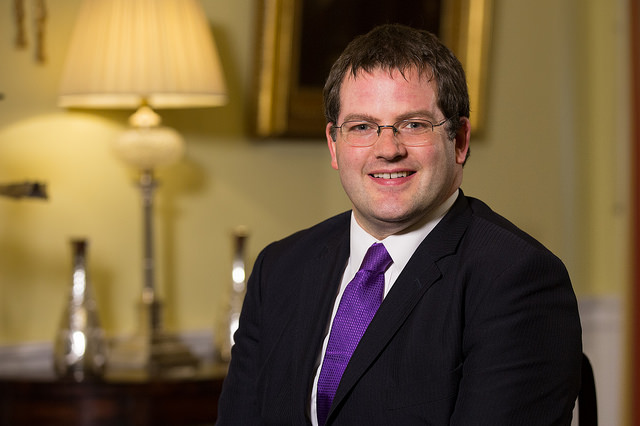 SNP MSP MARK MCDONALD announced on Saturday that he would step down as minister for childcare and early years following allegations of “inappropriate” behaviour.

The resignation came amid increased attention to the issue of sexist workplace cultures in recent weeks as women have come forward en masse to share their experiences of harassment and abuse following the highly publicised allegations against Hollywood producer Harvey Weinstein.

McDonald said: “It has been brought to my attention that some of my previous actions have been considered to be inappropriate — where I have believed myself to have been merely humorous or attempting to be friendly, my behaviour might have made others uncomfortable or led them to question my intentions.

“My behaviour is entirely my responsibility and I apologise unreservedly to anyone I have upset or who might have found my behaviour inappropriate.

“I believe it would not be appropriate for me to continue to serve in my role in the Scottish Government and I have tendered my resignation as a minister.”

Westminster has become embroiled in allegations, with the resignation of Defence Secretary Michael Fallon and as many as 36 further accusations against Tory MPs being investigated, including senior party figures Mark Garnier and Stephen Crabb.

The SNP confirmed last week that two unrelated allegations were being investigated by the party, one of which is understood to have related to Mark McDonald and is not considered to be criminal in nature. The second individual concerned is reportedly not a parliamentarian.

Emerging reports make clear that neither Westminster, Holyrood, nor any political party is untouched by the issue.

Scottish Labour MSP and Shadow Minister for Inequality Monica Lennon told the Sunday Mail that she was sexually assaulted by a senior Labour figure at a party in 2013, while she was a South Lanarkshire councillor. Lennon said the man groped her in “full view of other people”, but that the incident was laughed off by colleagues.

“I don’t want to go into the full details but he touched my body, in an intimate way, without invitation or permission. This shouldn’t happen to anyone,” she said.

“It’s possible at least half a dozen people saw exactly what happened. One man, who at the time was a Labour politician, joked to everyone in earshot, ‘That’s your fault for coming over here and getting him all excited’.”

“Politics was a male-dominated environment for so long and there can be a sense of entitlement which is quite pervasive.” Monica Lennon MSP

Lennon has been outspoken on the issue of sexism and harassment in politics, and hopes that the focus on the issue now can bring about a real cultural shift.

She said: “People, including some in the Scottish Labour Party, roll their eyes when feminism and equality issues are discussed. They need to ask themselves if they are living up to our core values.

“Politics was a male-dominated environment for so long and there can be a sense of entitlement which is quite pervasive. There has to be a change in culture now and, if that means the parties working together to achieve it, so be it. This is about everyone, not just politicians.”

Allegations have also been made against Labour MPs Kelvin Hopkins and Clive Lewis, and Labour activist Bex Bailey alleges that she was raped by a senior party member in 2011 and discouraged by a party official from reporting it.

In response to calls to address the issue at Holyrood and make reporting easier, the Scottish Parliament has opened a phone line for staff affected by sexual harassment or misconduct. An anonymised survey will be carried out by the parliament to ascertain the extent of the problem.

Responding to McDonald’s resignation, a spokesman for First Minister Nicola Sturgeon said: “Mark has taken the right action in apologising and recognising that it would be inappropriate for him to remain in government.

“It is right that men take responsibility for their behaviour and it is to Mark’s credit that he has done so.” Spokesman for First Minister Nicola Sturgeon

“He will continue to make a valuable contribution to parliament as the MSP for Aberdeen Donside. As the deputy first minister told parliament earlier in the week it is right that men take responsibility for their behaviour and it is to Mark’s credit that he has done so.”

Sturgeon has requested a review of the Scottish Government’s sexual harassment complaints process, and the SNP is undertaking its own review.

Deputy First Minister John Swinney responded to a question on addressing sexual harassment in parliament last week: “The government wants to make clear that it is the conduct and behaviour of men that needs to change if we are to end the sexual harassment and abuse of women, whether that be in their workplace, their social life or in their home.

“Therefore, as the most senior male minister in the Scottish Government, I wanted to answer this question and to make clear that it is up to men to make these changes and men must examine their own behaviour.

“Sexual harassment or abuse in the workplace or anywhere else is completely unacceptable and must stop, just as the underlying attitudes and inequalities that perpetuate it must also stop.”

A series of questions have been lodged by MSPs on the action being taken to address the problem, to be discussed by the Scottish Parliament Corporate Body later this week, so a continued focus on the issue can be expected.