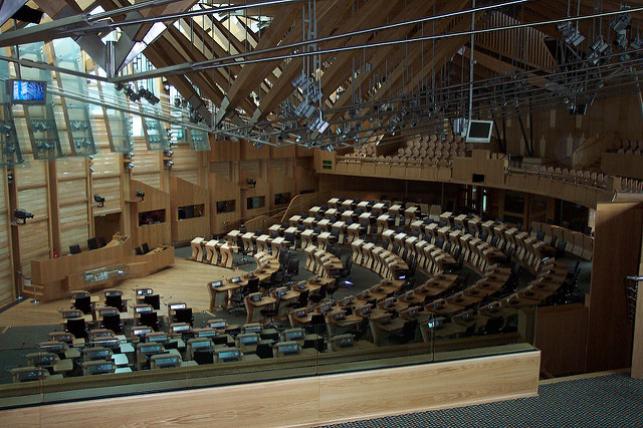 A WARNING for dedicated readers (all three of them): the diligent Edinburgh contingent of CommonSpace (i.e. muggins here) may be somewhat delayed in its parliamentary coverage due to incipient weather conditions.

‘The Beast from the East’ – which is, contrary to what one might suspect, an oncoming nation-wide snowmageddon, and not a nickname from my Glaswegian colleagues – is bearing down mercilessly upon our benighted island. This may cause some disruption to transport, particularly for those Edinburgh MSPs who thought it was a smart move to buy a bicycle.

So, up until the national legislature completely devolves into the Donner Party, here’s a rundown of what we can expect in the week ahead.

On Tuesday, the Scottish Government will host a debate on developing a healthy weight strategy for the nation. Recommendations may include encouraging said nation to eat at the parliamentary café, where the sandwiches are so extravagantly expensive, penurious emaciation is inevitable. Many would have faded away to nothing were it not for the life-saving effects of the brie-and-bacon roll.

Bad jokes aside (will the wonders never cease?), Wednesday will then see SNP MSP Clare Haughey bring the chamber’s attention to this year’s Eating Disorders Awareness Week, tying in stakeholder efforts to combat the prevalence and effects of such disorders with the Scottish Government’s Mental Health Strategy.

Finally, on Thursday, there will be a ministerial statement on Scotland’s plan to tackle climate change. The relevancy of this briefing will be particularly piquant, since by that point in the week, most of the country is expected to be re-enacting the latter scenes from The Day After Tomorrow.

The Planning (Scotland) Bill shall dominate much committee business this week, with various aspects of the plan to reform how Scottish land is developed and used being examined by the local government and communities committee as well as the finance and constitution committee. Common Weal recommendations for what should be included in the bill can be read here.

Later on, the public petitions committee will be considering those currently continuing petitions submitted to the Scottish Government, including a study of driven grouse-shooting (which may address the recent suspicious disappearance of a golden eagle in the Pentlands, and subsequent protests from gamekeepers that it was pure coincidence the bird vanished over an area where people routinely shoot at birds) and the common law on blasphemy.

To keep you up to date, CommonSpace promises to bring our readers all the hottest new blasphemy as soon as it becomes available.

On Tuesday, Scottish Green MSP John Finnie will host a reception for the Campaign Against the Arms Trade Scotland, highlighting that many of the weapons sold under UK oversight are used by repressive regimes against their own citizens.

Meanwhile, Wednesday will begin with a breakfast seminar regarding the view on Brexit from Northern Ireland. Hopefully, sobbing will be kept to a minimum.