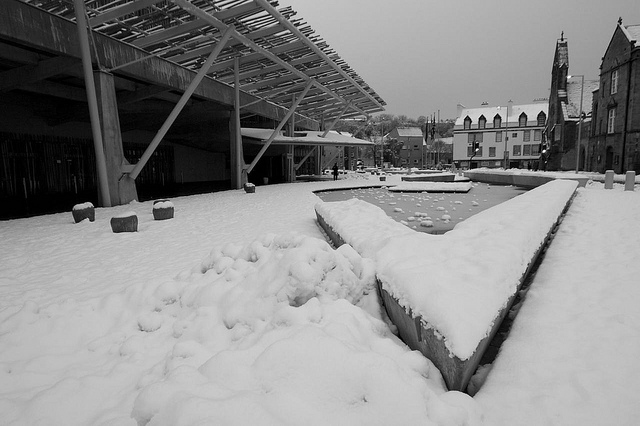 “What freezings I have felt, what dark days seen…”

IT WAS MY OWN FAULT. I should have shunned this perilous expedition into the unknown – the mad dream of a daily parliamentary roundup. If I had, I would not have seen what I have seen. I would also still have feeling in all my fingers.

A tourist, frozen solid into a ghastly human ice sculpture while attempting to buy a tartan necktie from the parliamentary gift-shop; MSPs eying each other hungrily, as representatives of the Scottish Greens wondered aloud if their vegan diets made any allowances for blizzard-mandated cannibalism…

CommonSpace is not in parliament today, and neither is anyone else. Not for the usual reasons of parliamentary recess, but because the snow and ice and wind have driven humanity from its halls and cloisters, and back into the precious warmth. But the fire is dying, provisions run low, and in these final hours I must record what I have seen; what slipped by, in our daily reports of the past week, in the parliament that sits beneath the mountains of madness…

On Tuesday, SNP MSP Jenny Gilruth raised the issue of minimum pricing for alcohol. According to Shona Robinson, Cabinet Secretary for Health and Sport, the Scottish Government believes that a minimum price of 50p per unit strikes a “reasonable balance” between public health and an intervention in the market. However, matters may have changed since then, as demand may require the price on certain brandies to increase while St Bernards are equipped with barrels around their necks for rescue operations in the outer plains of Leith and Morningside.

On Wednesday, Labour MSP Colin Smyth asked Cabinet Secretary for Culture, Tourism and External Affairs Fiona Hyslop was progress has been made to ensure that the Galloway ‘Viking’ Hoard is displayed in Dunfries and Galloway, where it was discovered. The hoard is a trove of over 100 gold and silver objects from various parts of the Viking world, with an estimated value of roughly £1m.

Hyslop responded that the Scottish Government was keen to broker a deal between National Museums Scotland and Dumfries and Galloway Council in order for the hoard to be displayed. She also emphasised that it was to be called the Galloway Hoard, not the Viking Hoard – which is a subtle but direct way of letting any Scandinavians know: “It’s ours.”

On Tuesday, as the justice committee continued to muddle through the second stage of the Offensive Behaviour at Football and Threatening Communications (Repeal) (Scotland) Bill, Minister for Community Safety and Legal Affairs Annabelle Ewing, when asked what impede certain technical aspects of the bill, attempted to throw the responsibility of answering to her officials.

When the Convener told her that her officials were not permitted to comment, Ewing replied: “That is why they are looking at me askance, then.”

While the number of extra-parliamentary events was curtailed by emergency weather conditions this week, parliament did remain open for any tourists who felt like braving the Siberian temperatures. Getting in was no problem. Getting out – once several of the exits had been shut down – was slightly more problematic, but eventually it was determined that they could leave via the entrance. Hello, I must be going…