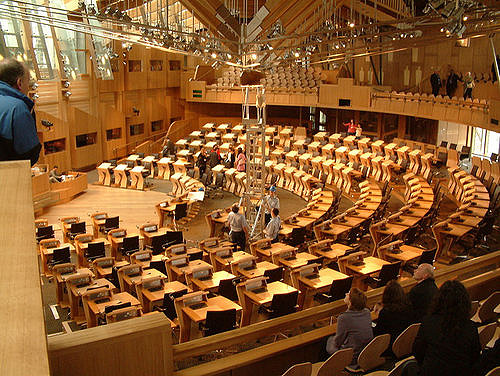 A look back at what you might have missed

UNLIKE MOST FRIDAYS, when Holyrood is generally unoccupied save for tourists and visiting schoolchildren, the Scottish Parliament expects a great deal of activity today.

Not within the building itself – the parliamentary café, dedicated though it is, is ill-equipped to serve scones to a thousands-strong demonstration – but for much of the day, Holyrood will be surrounded by the Hands Off Our Parliament rally, at which protestors from across the constitutional divide will stand against a Westminster power grab and in defence of Scottish devolution.

CommonSpace will be bringing you updates through the day via social media. Until then, here’s a reflection on what you might have missed in the past week…

At First Minister’s Questions, we were treated to the regular, much-loved spectacle of Scottish Labour leader Richard Leonard attempting to discern between reserved and devolved powers, a task which puts one in mind of a colourblind bomb defusal expert attempting to decide which wire to cut, before deciding they’re probably all the same.

Leonard challenged First Minister Nicola Sturgeon to rectify unethical practices regarding the payment of employees on Network Rail projects. Sturgeon pointed out that both employment law and Network Rail remain the province of the UK Government. Leonard acknowledged this new information by blinking, and then decided such a minor inconvenience would not interrupt his flow.

Later on, Patrick Harvie cited concerns from Friends of the Earth Scotland that Glasgow’s much-heralded Low Emission Zone is about as likely to eliminate air pollution in the city as a can of Febreze. While the First Minister recognised concerns, she preferred to accentuate the positive, highlighting that standards of air quality in Scotland are generally high apart from a few “hot spots”, which would be encouraging, if one of those hot spots wasn’t Scotland’s largest city.

With the passing of the Continuity Bill by 95 votes to 32 on Wednesday, both Michael Russell and the Scottish Parliament’s committees can celebrate that they will be seeing significantly less of each other. These rendezvous will not come to an end entirely – post-legislative scrutiny, and all that – but in the coming weeks, committees will need to satisfy themselves with bills that are not technically emergencies, but merely affect hundreds of thousands of people in vital and immediate ways.

Organisers are keen to emphasise that today’s Hands Off Our Parliament rally is pro-devolution, rather than pro-independence. Those attending will be assembling around parliament at 10am, with the first speakers scheduled for 11am, and the event coming to a close around 5pm.