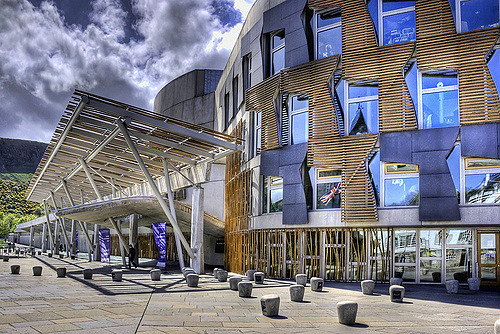 FMQs: How do we live without you?

PARLIAMENT came back swinging after its recent recess.

This week’s whirlwind of activity, crowded even by Holyrood standards, was thus far crowned by the combative passage of the Scottish budget on Wednesday evening, but there’s a certain sense of grim anticipation around today’s First Minister’s Question Time, with a two week backlog of unanswered questions and unarticulated grievances for party leaders to cram in.

Yet despite FMQs habit of swallowing the spotlight, that’s not the only thing going on today. As ever, CommonSpace brings you up to date.

As it often does, General Questions with raise a number of pertinent local issues, such as the economic health of East Kilbride, the regeneration of Edinburgh’s waterfront, and the closure of a 2 Sisters Food Group factory in Cambuslang.

However, Green MSP John Finnie will address broader matters by asking what discussions the Scottish and UK Governments have engaged in regarding the safeguarding of Scottish university staff pensions, an issue which has seen lecturers in nine Scottish universities engage in walk-outs as part of a UK-wide action.

As ever, opposition party leaders are keeping their planned inquiries for FMQs under wraps, but when Ruth Davidson throws the opening salvo in the weekly bloodsport, the First Minister will be spoiled for choice choosing a barb with which to respond. Maybe a crack about the Tory MSPs who have abandoned their Remainer leader in favour of hard Brexit, or perhaps a dig about Russian donors and what they’ll pay for a dinner companion?

Following FMQs, a ministerial statement on Prestwick Airport will presumably attempt to lay to rest recent controversy over the public asset’s use by American military and the possibility it may have facilitated strikes on Syria that the Scottish Government itself has opposed. Unless the Scottish Government can break out something better than Elvis anecdotes, it seems unlikely this will settle the issue.

Later in the day, the Scottish Government will host a debate on Scotland’s population needs and migration policy. It is expected this will include some impassioned discussion on the possibility of devolving immigration to Scotland – a move backed by the SNP, Greens, some high-profile trade unions and the Common Weal think tank – but Tory MSP Jackson Carlaw has an amendment ready, questioning Scotland’s ‘unique’ needs and advocating close cooperation with the UK Government’s overall framework on immigration. Good luck with that.

The culture, tourism, Europe and external affairs committee will today be examining sustainable funding for Scotland’s arts and creative organisations, much discussed in recent weeks, but in a rare change of pace will be receiving evidence from the embattled representatives of Creative Scotland, who are at least notionally qualified, as opposed to politicians who discovered the arts’ existence sometime last month and believe cultural funding in Scotland in a fiendish conspiracy to build an underground army of nationalist zombie poets.

Labour MSP Kezia Dugdale will be hosting a photocall for “Purple Friday”, LGBT Youth Scotland’s annual fund and awareness-raising campaign, which aims to highlight their work with young people and give allies an opportunity to declare their support for LGBTI equality and inclusion in Scotland.

Later, SGN will host a reception on ‘Meeting Scotland’s Need for Heat’, which in the middle of February, few are likely to dispute.