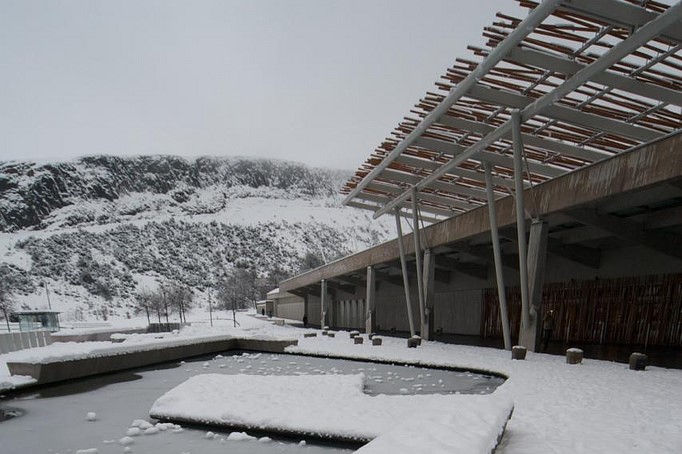 THESE ARE THE END TIMES. In response to the mockery of the faithless and insufficient levels of human sacrifice (the lack of which will no doubt be raised at First Minister’s Questions), the weather gods Snawhovah and Frosthulu have unleashed a terrible yet aesthetically pleasing vengeance upon the land.

In a week’s time, Glaswegians will look to the mile-high snow dunes to the East, and wonder if a place called ‘Edinburgh’ ever really existed at all.

Nevertheless, your maniacally dedicated correspondents at CommonSpace soldier on. Figuratively, at least. We’re working from home today, as travel in current weather conditions has been officially discouraged; while trekking home from parliament yesterday, the only traffic on the roads was Tilda Swinton being drawn in a sleigh by several polar bears.

Nevertheless, Holyrood perseveres. Reportage shall continue via the medium of the Scottish parliament’s semi-reliable livestream, which may just end up being footage of MSPs sending messages to their loved ones.

The opening questions from FMQs are, as ever, confidential until showtime, but SNP MSP Ivan McKee will be giving the First Minister an opportunity to update parliament on the progress of the Scottish National Investment Bank (SNIB). Reactions from opposition parties have thus far been muted – Labour believes the bank should have ten times as much money, while the Tories are still trying to articulate the words “publicly-owned” without violent nausea.

Next, following the Lord Advocate’s defence of UK Withdrawal from the European Union (Legal Continuity) (Scotland) Bill, parliament will next consider the Scottish Government’s position that the daring, outlaw response to Brexit be treated as an emergency bill. Debate over the shocking proposition that a national legislature should respond to a national crisis with legislation will likely be fierce.

Little in the way of new business today: the social security committee will, appropriately enough, be examining the Social Security (Scotland) Bill now it has reached the second stage of the legislative process, while justice secretary Michael Matheson and equalities secretary Angela Constance will be overseeing the Historical Sexual Offences (Pardons and Disregards) (Scotland) Bill. Given the amount of lives that will be calculably and significantly affected by both, progress is vital and details cannot be fudged.

There are, rather sensibly, no civilian events scheduled for today. Remain indoors.