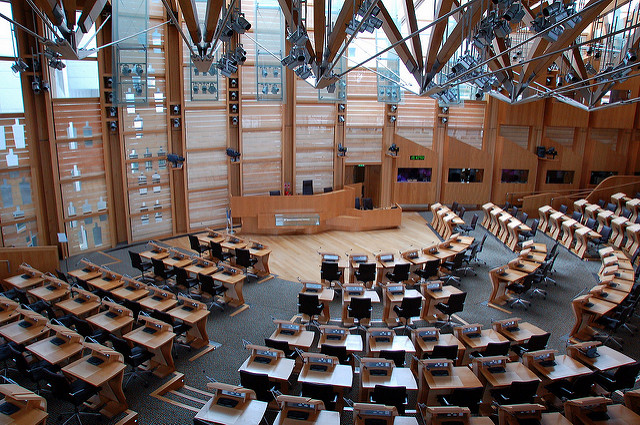 CommonSpace rounds up Hump Day in the Scottish Parliament

WEDNESDAY at Holyrood is often busy, as MSPs and various Scottish Government bodies attempt to get as much boring, serious work done as possible before public and press attention is drawn to the all-singing, all-dancing nightmare of First Minister’s Questions on Thursday.

Today, Finance Secretary Derek Mackay will be drawn in two opposing political directions on the rack of Scottish budget amendments, Green MSP Ross Greer leads a debate on bus services, and parliament will attempt to host pupils from three different schools without completely descending into Lord of the Flies.

Mike Russell, who picked the short straw somewhere along the line and was gifted with the position of Minister for UK Negotiations on Scotland’s Place in Europe, will give evidence to the Finance and Constitution Committee, who will no doubt be curious where Brexit will leave us constitutionally, or whether it will leave us with any finances.

Elsewhere, the Local Government and Communities Committee will continue to prepare a draft report on homelessness in Scotland, and will arrange for the Electoral Commission Scotland to give evidence on the 2017 Scottish local elections. Who knows? Maybe they’ll reveal there was a mix-up and the Scottish Libertarian Party swept the board.

In the Chamber this afternoon, Portfolio Questions will focus on the Communities, Social Security and Equalities brief. Gordon Lindhurst will be asking for an update on the work of the Homelessness and Rough Sleeping Action Group, while Jeremy Balfour will seek details on the Scottish Government’s efforts to improve support services for vulnerable people who find themselves homeless or in temporary accommodation.

Questions regarding housing will also be fielded, with Rachael Hamilton asking the Scottish Government about what recent discussions it has had regarding the provision of social housing, and Gordon MacDonald addressing the housing demand for older tenants with mobility issues.

As the latest draft of the Scottish budget is debated in the Chamber, two amendments will be considered: Tory MSP Murdo Fraser will attempt to force Derek Mackay to admit that the SNP has broken a manifesto pledge in increasing tax for almost 900,000 basic rate taxpayers, while Labour MSPs will try to get Mackay to acknowledge that said tax rise will not raise enough revenue or distribute enough wealth to tackle poverty, protect local services or provide a public sector pay rise. Next week, parliament will demand that soup be both hot and cold simultaneously.

Finishing off the day will be Ross Greer’s Member’s Business on bus services, addressing concerns regarding rising fares in Glasgow and the West of Scotland region. Greer’s motion states that bus fares for the under-16s on First Bus services have risen by 40 per cent, while single adult fares have increased by 15 per cent. The following debate will examine whether rising fares will have a negative impact on families, low-earners and young people.

This evening, events will be held for MSPs and invited guests for the British Heart Foundation, a Life and Chemical Sciences Leadership Masterclass and Scotland’s Drowning Prevention Strategy.

Of course, with visits from ESMS Junior School, St Cuthbert’s RC Primary School and Balcurvie Primary School scheduled for earlier on, there’s every possibility that the Scottish Parliament could be subject to a pre-adolescent coup d’etat by the end of the day.