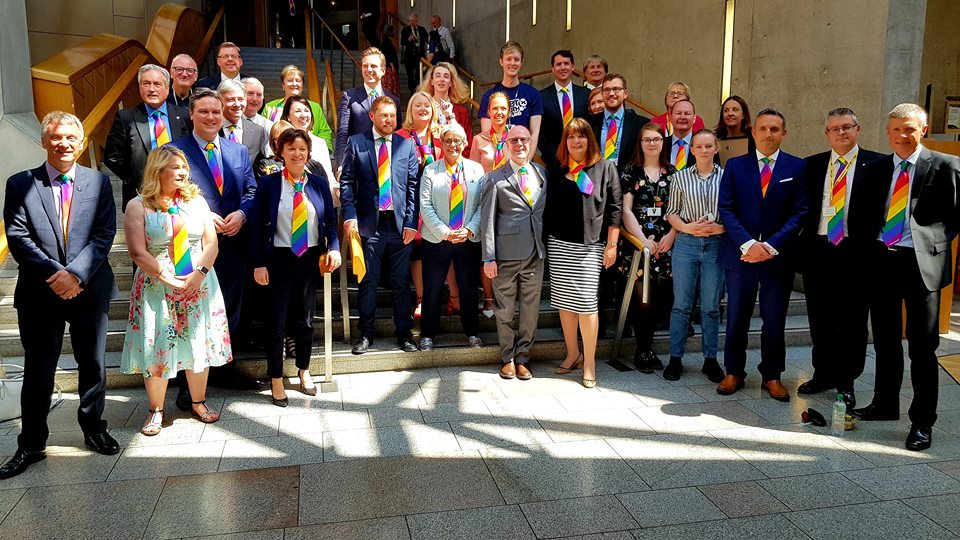 Paying tribute to the TIE campaign, Nicola Sturgeon pledged to implement the upcoming recommendations of the LGBTI Inclusive Education Working Group “as quickly as possible”

TRIBUTES both verbal and sartorial to the Time for Inclusive Education (TIE) campaign were paid in the Scottish Parliament today, as the world renowned LGBTI advocacy group marked the third anniversary since its formation.

First raised by Scottish Green co-convener Patrick Harvie as a follow-up to a question on education during First Minister’s Questions, First Minister Nicola Sturgeon expressed pride in her association with the TIE campaign, reiterated that the Scottish Government was working with the group to promote inclusive education, and confirmed her commitment to implementing the upcoming recommendations of the LGBTI Inclusive Education Working Group “as quickly as possible.”

Several MSPs across the chamber – including Sturgeon, Scottish Labour leader Richard Leonard and all MSPs from the Scottish Greens – expressed their support by wearing either badges or the TIE campaign’s distinctive rainbow-coloured necktie.

“I would like to end this session with a positive proposal in education – something the Government should be doing, instead of just something we think it shouldn’t be doing,” said Harvie. “This [is] the third anniversary of the TIE campaign, Time for Inclusive Education, looking for an education system that meets the needs of Scotland’s lesbian, gay, bisexual, transgender and intersex young people. A campaign which has political support from across the spectrum. And I am pleased to see so many MSPs wearing the TIE campaign’s rainbow tie in the chamber today.

Harvie went on to ask: “Can we have a commitment from the government that we won’t let the fourth anniversary of that campaign pass without making the goal of truly LGBTI-inclusive education a reality in Scotland’s schools?”

Nicola Sturgeon responded: “Firstly, I’m very proud to wear the TIE badge today, and would want to take this opportunity to congratulate the TIE campaign on their third anniversary – a campaign mainly driven by young people, which I think is an inspiration to young people everywhere across Scotland, showing the power of their voices to make positive and progressive change, and I, as I’m sure all MSPs will do today, pay tribute to them for their positive example.

Sturgeon continued: “As Patrick Harvie knows, the Scottish Government is working with TIE, to – and I’m quoting – ‘promote an inclusive approach to sex and relationships education’. This work is being done through the LGBTI Inclusive Education Working Group.

“That working group is chaired by the Association of Directors of Education; it includes representation from the Scottish Transgender Alliance, LGBT Youth Scotland and Stonewall Scotland, and recommendations from the working group are expected in autumn of this year. At that point, I’m sure everyone across the chamber will have an interest – I know the government with me as First Minister will have an interest – in making sure that these recommendations are implemented as quickly as possible.”

Commenting in the aftermath of FMQs, Harvie went on to call for a more explicit commitment to the aims of the TIE campaign from the Scottish Government, saying: “With the unwanted Education Bill kicked into the long grass, the First Minister must commit to ensuring the aims of the TIE campaign become a priority for her education secretary, rather than unnecessary regional structures and unwanted national testing.

“One of the top priorities in education must be ensuring LGBT-inclusive education. We know for example from the inquiry by the Education Committee that Personal and Social Education is ‘inconsistent’ and ‘inadequate’.

“We also know from TIE’s LGBT awareness assemblies that 96 per cent of all pupils who took part in their awareness work said it had made them more aware of the impact that homophobic, biphobic and transphobic bullying behaviours and attitudes can have on others. The burden of this important work should no longer fall to small voluntary campaigns alone. It’s time for the Scottish Government to step up.”

“The burden of this important work should no longer fall to small voluntary campaigns alone. It’s time for the Scottish Government to step up.” Scottish Green co-convener Patrick Harvie

Since its founding in June 2015, the TIE campaign has achieved both significant national progress and international acclaim and influence.

In the year of its inception, the group described the current state of LGBTI education in Scotland as a “national disgrace”, in the words of TIE’s co-founder Jordan Daly.

The group has advocated for new legislation addressing the steps all schools must take to tackle homophobia, biphobia and transphobia, as well as underpinning LGBTI-inclusive education; the delivery of a free-to-the-point-of-access teacher training programme for all teachers specifically addressing LGBTI issues, and the recording by schools and local authorities of all instances of homophobic, biphobic and transphobic bullying.

The campaign has since won support from figures such as Nicola Sturgeon, Scottish Labour leader Jeremy Corbyn and human rights advocate Aamer Anwar, as well as the Scottish Trade Union Congress (STUC) and Educational Institute of Scotland (EIS), the largest Scottish teaching union. During the 2016 Holyrood elections, TIE’s call for improved teacher training was adopted into the manifestos of all the major political parties.

Picture courtesy of the TIE campaign