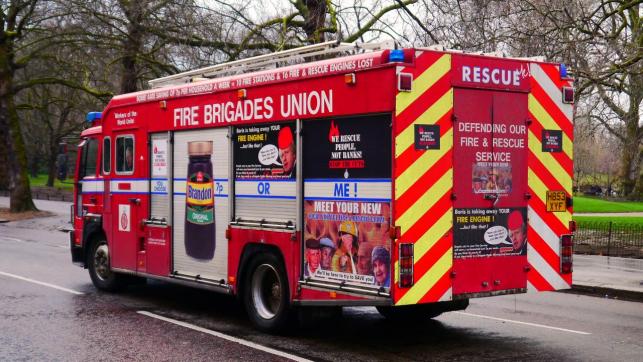 Members of the Hebron Fire Brigade are receiving joint-support from FBU, the Scottish Fire and Rescue Service and the Scottish Government

PALESTINIAN FIREFIGHTERS who have received training in Scotland thanks to a joint initiative between the Fire Brigades Union (FBU) Scotland, the Scottish Fire and Rescue Service and the Scottish Government met with MSPs at the Scottish Parliament on Thursday.

At an event hosted by the SNP MSP and convener of the Scottish Parliament’s cross-party group on Palestine Sandra White, trainee members of the Hebron Fire Brigade were greeted and honoured ahead of their passing out ceremony at the National Training Centre in Cambuslang on 17 January.

“The FBU have a long and proud history of supporting the cause of Palestinian freedom and of giving practical support to the Palestinian Fire Service.” FBU Scotland spokesperson

In a statement released to CommonSpace, a spokesperson for FBU Scotland said: “The FBU have a long and proud history of supporting the cause of Palestinian freedom and of giving practical support to the Palestinian Fire Service.”

In recent years, the FBU has delivered firefighting equipment to the municipalities of Nablus and Hebron, to the embattled Fire Service in Gaza and to the Palestinian Civil Defence based in Ramallah.

In partnership with the Scottish Government and the Scottish Fire and Rescue Service, the FBU has also facilitated training courses for over 100 trainee Palestinian firefighters since 2009.

The most recent batch of trainees received their training in Scotland after the Mayor of Hebron, Dr Dauod Zatari, contacted the FBU and asked if they could assist the city’s firefighters after multiple fire fatalities tested the resolve of the Hebron Fire Brigade.

In response, representatives of the FBU visited the city, and observed that the service was poorly equipped and had received little formal training in modern firefighting techniques. According to the FBU statement: “The FBU resolved to do all it could to deliver Breathing Apparatus, Personal Protective Equipment and to afford a training course in the CABA skills required.”

In September of 2016, thanks to the collaborative Scottish venture, a shipment of firefighting equipment left Dundee. In October, it arrived in Israel, where it was impounded by Israeli Military Customs, despite being a humanitarian delivery.

The FBU subsequently returned to Israel and Palestine in order to secure the release of the donation, which they succeeded in doing in January of 2017. The equipment was then dispersed amongst the firefighters of Nablus, Hebron, Ramallah and the volunteers in the Shu’fat Refugee Camp.

The collaboration between the FBU, the SFRS and the Scottish Government has been described by the FBU as a “unique bespoke initiative”, and according to the FBU, the most recent trainees have “responded magnificently to the challenges and opportunities afforded them by the outstanding training team at the National Training Centre at Cambuslang.

“The skills obtained will allow the firefighters to work safely in hazardous environment’s and to develop and maintain safe procedures for the benefit of the Palestinian people.”

“I am immensely proud that Scotland stands in solidarity with the Palestinian firefighters who visited the Scottish Parliament.” SNP MSP Christina McKelvie

Commenting on the visit to Holyrood by the Hebron firefighters, SNP MSP Christina McKelvie told CommonSpace: “I am immensely proud that Scotland stands in solidarity with the Palestinian firefighters who visited the Scottish Parliament. My thanks to Sandra White for hosting the event and constantly championing their cause.

“The FBU offer amazing support in terms of equipment, knowledge and best practice. The learning and practical solidarity the FBU provide is second to none. I look forward to continuing my annual support for the visiting Palestinians showing that Scotland stands with them in support and guidance.”

“We should all be proud of these efforts to help Palestinians struggling under occupation.” Labour MSP Pauline McNeill

Pauline McNeill MSP also told CommonSpace: “I have been to Hebron in Palestine many times. It is the largest city in the West Bank and is in desperate need of fire and rescue equipment. This is the second time firefighters [from Hebron] have been to the Scottish Parliament and it has been amazing to witness how much the service has grown due to the efforts of the Fire Brigade Union the fire service and the Scottish Government.  MSPs hope to visit Hebron in the future to see their work in action.

“The skills that are acquired in Scotland will literally save lives. We should all be proud of these efforts to help Palestinians struggling under occupation.”

The Hebron Fire Brigade trainees’ passing out ceremony will take place at the National Training Centre in Cambuslang on 17 January. At 10.30am, there will be a practical demonstration of the skills they have learnt, and at 2pm there will be a presentation of awards.