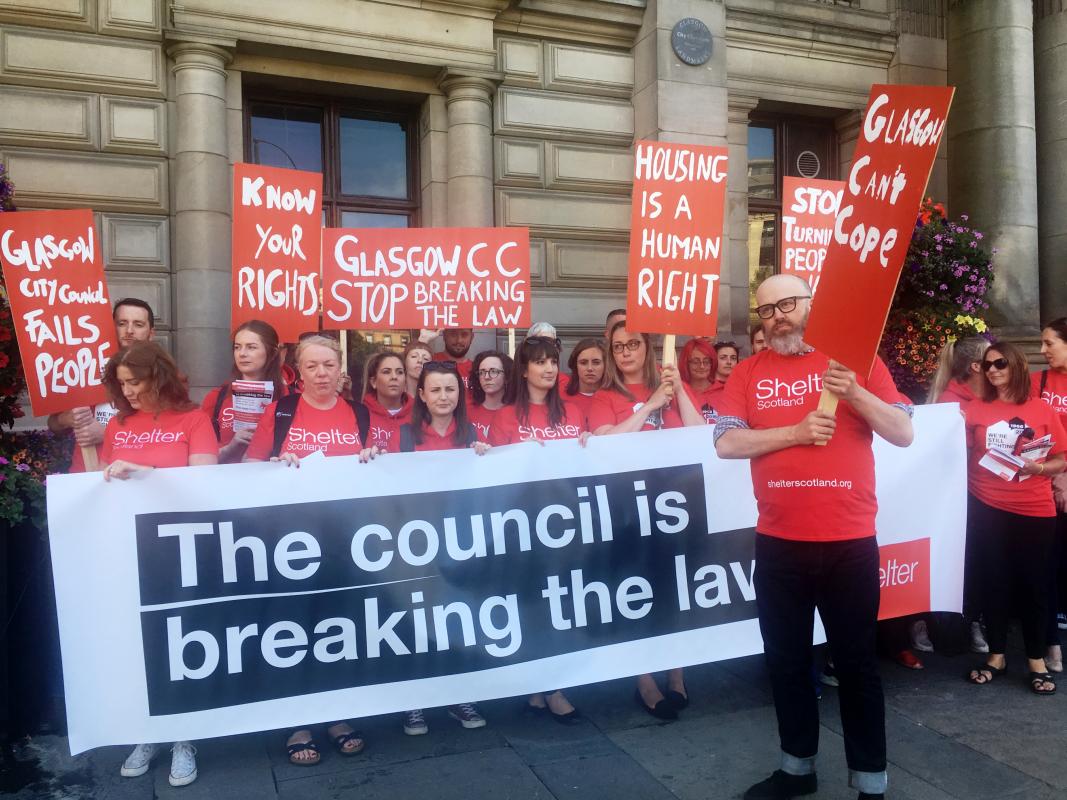 One year on to the day from Glasgow’s Housing and Homelessness Summit, the charity has said the council is still failing to meet its legal duty to provide homeless people who come to them for help with temporary accommodation.

Official statistics published by the Scottish Government show that the council failed to provide accommodation in 3,025 cases, which Shelter Scotland says amounts to unlawful “gatekeeping”.

Using the hashtag #GlasgowCCFailsPeople, the charity is unequivocal in its message to the council: “Enough is enough.”

Graeme Brown, Director of Shelter Scotland, said: “Glasgow City council should hang its head in shame. It is shocking and completely unacceptable that on more than 3,000 occasions last year the city denied homeless applicants their rights by breaking the law.

“It cannot be right that one of the UK’s largest councils can act unlawfully in this way and treat some of the most vulnerable people in our society with such disregard. Shelter Scotland believes that everyone has the right to a home.

“One year on from the new city administration’s landmark Housing and Homelessness Summit in 2017, it is deeply disappointing to see that little or no progress has been made on this vital issue.”

Graeme Brown, director of @shelterscotland explains why the organisation and its supporters are protesting outside Glasgow City Chambers today and demanding actual to help the city’s homeless population. pic.twitter.com/1uZn4ROEGU

Brown said Shelter Scotland’s services and legal teams in the city had been “inundated” as a result of the council’s “systemic failures”.

The charity said that 100 people who experienced the practice came to them in just five months last year, while a recent report by the Scottish Housing Regulator said the council “secured homes for only around half of those that it had a duty to house in the city”.

Shelter first raised its concerns about the issue in December 2013, and in January of this year wrote to the council highlighting the evidence and requesting a meeting, a request campaigners say has received no formal response.

A Glasgow City council spokesperson said the council “strongly refutes Shelter’s accusations of ‘gatekeeping’” and that senior council officers had been “seeking to meet with them over a number of months to discuss the issues they raised earlier in the year” but had received no response from the charity.

Councillor Mhairi Hunter, chair of Glasgow’s Health and Social Care Partnership, added: “I have personally offered twice in meetings with Shelter to be a direct point of contact for them if they have issues they want to raise. But they have not taken me up on the offer.

“I reiterate that offer today, so that we can have meaningful discussions about how to move forward together on this issue.”

However, spokespeople for Shelter attending the protest were adamant that no such meeting had been offered.

READ MORE: Homeless in Glasgow: The return of society

Sharon Berrie, manager of Shelter Scotland’s Glasgow Hub, told CommonSpace: “We’re aware that the council have responded to these claims and have said that they’ve wanted to meet us, and we absolutely dispute that.

“We have no recollection of them asking for a meeting after we’ve sent the report regarding these concerns in January, and the figures we’re using today have come from their own HL3 figures in the Scottish Government report that was released a couple of weeks ago.

“So we’re here today trying to drum up some public awareness to the fact that homeless people are repeatedly being failed in this city by Glasgow City council.”

Director Graeme Brown told CommonSpace that one of the aims of the protest was to seek an emergency meeting of the council to discuss the matter.

Principal solicitor for Shelter Scotland Fiona McPhail said that there needed to be greater awareness among the public of people’s legal rights regarding homelessness. “When it comes to homeless legislation we’ve got some of the most progressive legislation in the world,” she said.

“In Scotland, if a local authority has a reason to believe somebody is homeless they have a legal obligation to provide somebody with accommodation.

“What we’re seeing in practice, far too often, is people being told ‘there is nothing available, it’s a resource issue’. But as a matter of law, that doesn’t stand.”

READ MORE: Changing lives: How groups of Glasgow locals are taking it upon themselves to help turn desperate lives around

Fiona McPhail, principle solicitor for @shelterscotland explains that Scottish homelessness law means people have a legal right to accommodation when they’re homeless – but many people are not having those rights met. pic.twitter.com/GKBA7kvc9Z

McPhail said that many people who are turned away by councils simply “take that for granted”, unaware of the “very strong rights” which are in place. Often, she said, the charity is approached by people who have spent weeks rough sleeping, but “within hours or days of us becoming involved those people are able to secure the temporary accommodation they’re entitled to by law”.

This, McPhail said, leaves far too many people who “don’t have access to the advice services and legal services that might make a difference”.

She added: “As a society we have decided to create a safety net and to make sure there is that element of legal remedy, legal entitlement. It’s time that this council and other councils started thinking seriously as to their statutory obligations to the homeless.”

Patrick Harvie, Scottish Green co-convener and MSP for Glasgow offered his support to the protest and said the Scottish Government must provide the funding or tax powers to councils to allow them to meet their requirements.

He said: “It’s appalling that despite raising concerns five years ago, housing campaigners are still having to challenge Glasgow City council’s behaviour.

“Homelessness can happen to anyone and we need to see immediate action from local authorities to ensure people are not turned away when they ask for help.

“Of course that also means that the Scottish Government must provide the money our councils need, or the tax powers to let them raise the funds themselves. The squeeze on local services is hurting people in Glasgow and right across Scotland.”