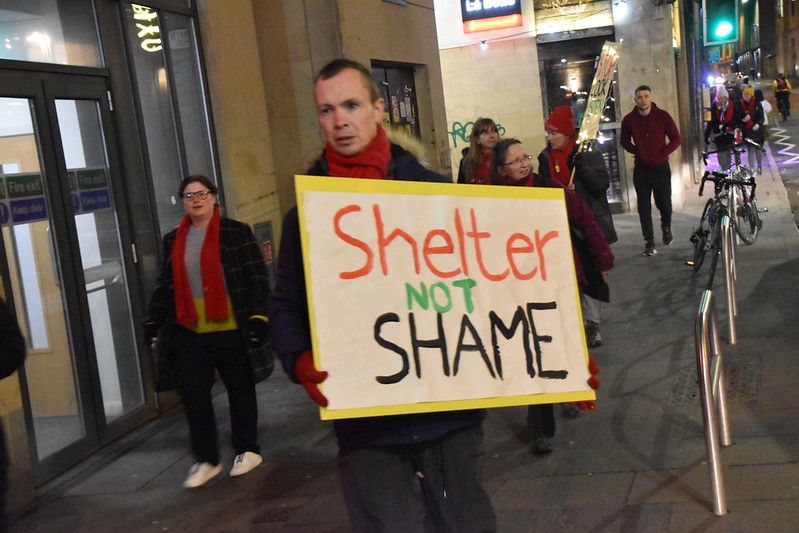 OVER 7,000 children in Scotland reside in temporary accommodation, according to the latest official statistics – the highest number since current records began in 2002.

Following the publication today [28 January] of the latest bi-annual figures on homelessness from Scotland’s chief statistician, the charity Shelter Scotland has warned that local authorities are failing to deliver their legal obligations to homeless people “on an industrial scale”.

The new findings show that 7,252 children were living in temporary housing as of September 2019, compared to 2,389 – the lowest number yet recorded – in 2002. Additionally, the number of households in temporary accommodation has also risen on a national level to 11,432 – an increase of four per cent.

Commenting on the new figures, housing minister Kevin Stewart acknowledged the need to “go further” to aid and protect those experiencing homelessness, but highlighted the Scottish Government’s 49-point homeless action plan, the implementation of which is planned to continue throughout the year.

Stewart said: “Scotland has some of the strongest rights in the world for anyone experiencing homelessness, including the right to help from their local authority to secure a stable home and emergency temporary accommodation.

“I recognise we must go further to achieve this for everyone. That is why the Scottish Government has invested £32.5 million into Rapid Rehousing and Housing First to prioritise permanent, settled accommodation, as the first response to minimise the length of time people spend in temporary accommodation.

“In the first year of our £50 million Ending Homelessness Together Action Plan, we have progressed 39 out of 49 measures with plans to start the remaining ten this year.”

The statistics also reveal that Scottish councils failed to offer temporary accommodation to homeless people 10,840 times since January 2017, with Glasgow failing to accommodate 8,820 times, prompting Shelter Scotland to argue the city “still has by far the biggest issue meeting this legal duty – a fact now the subject of an inquiry by the Scottish Housing Regulator”.

Commenting, Shelter Scotland director Graeme Brown said: “These statistics lay bare the reality of our housing emergency. More children in temporary accommodation than we’ve seen in the last 17 years and many households turned away altogether.

“The sheer numbers of occasions when people are being turned away to fend for themselves is scandalous. Who knows what happens to these people when they leave the council offices?” Shelter Scotland director Graeme Brown

“While it’s good that Edinburgh is now being transparent these figures show the council has not been meeting its statutory duties, a situation which we have already highlighted in Glasgow.

“The sheer numbers of occasions when people are being turned away to fend for themselves is scandalous. Who knows what happens to these people when they leave the council offices? Councils can’t pick and choose which laws they adhere to.”

Brown continued: “We will now be writing to the Scottish Housing Regulator, the Housing Minister and Council leaders to seek urgent meetings to rebuild confidence in the official record of homelessness in this country. If we don’t know the size of the problem how can we plan to meet demand from those who need help?

“These statistics lay bare that despite the success of the Scottish Government’s affordable housing building programme there is still a chronic shortage of social housing in Scotland to ensure everyone has a safe, affordable home. Derek MacKay must make next week’s budget a budget to build and radically increase the supply of both good quality temporary accommodation and the permanent social homes that people need.”

“It is heart-breaking and entirely avoidable that we have thousands of children growing up in B&Bs and other forms of temporary accommodation.

“Scotland is in desperate need of inexpensive, readily available accommodation for families as proper support for those in financial difficulty.

“Scottish Labour calls on the SNP to work with us to create a proper plan for housing in Scotland and use the powers of the Scottish Parliament to mitigate the worst aspects of Universal Credit that helps to drive families and children into poverty.”

Concerns over Scotland’s housing crisis were also raised by the Scottish Federation of Housing Associations (SFHA), who responded to the new statistics by warning that uncertainty over the Scottish Government’s investment in housing after 2021 could undo the work being done to combat homelessness.

“These figures reinforce the urgent need to build more affordable homes – which is currently being hampered by the lack of funding plans for our sector.” SFHA chief executive Sally Thomas

SFHA chief executive Sally Thomas said: “Providing homes and support for those most in need continues to be at the heart of what our members do.

“However, these figures reinforce the urgent need to build more affordable homes – which is currently being hampered by the lack of funding plans for our sector.

“With no certainty on government investment from April of next year, we are already seeing housing associations suspend plans to build as, without support, some developments are not viable.

“There must be continuity to enable our members to continue to build.”

Thomas added: “There is no doubt the Scottish Government has taken action, and made investment, to prevent and alleviate homelessness.

“With the support and commitment of partners we will see the end of homelessness – but not overnight.

“If you look at the example of Finland – the only EU country where homelessness is falling – they took a ‘housing first’ approach.

READ MORE: Poll: 88% back a legal right to adequate housing in Scottish law

“It’s taken over 10 years and money for support services and – most importantly – new homes, but rough sleeping is now eradicated in the capital Helsinki and they have achieved significant savings in emergency healthcare, social services and the justice system.

“We can see the same happen here with a continuing supply of homes and the support needed for tenancies to be sustained.”

The new figures’ publication follows yesterday’s confirmation by The Ferret that Scotland’s national records office will publish official statistics on the number of people who have died while homeless for the first time next month.

The Ferret, in collaboration with the Bureau of Investigative Journalism, found over the course of their investigation that almost two people die every week while homeless, and anticipate that official figures will be even higher.